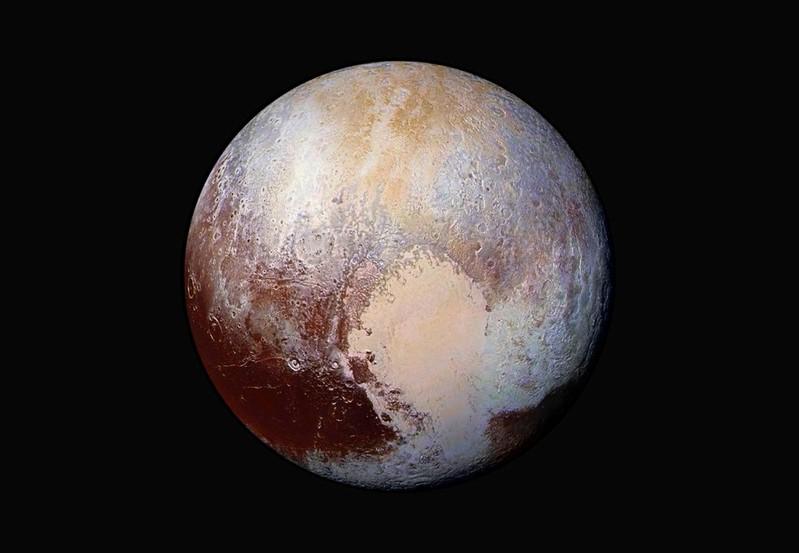 WASHINGTON (Reuters) – Scientists have detected another exotic feature on one of the solar system’s most wondrous worlds, a large field of dunes on the surface of the distant, frigid dwarf planet Pluto apparently composed of wind-swept, sand-sized grains of frozen methane.

The planet Pluto is pictured in a handout image made up of four images from New Horizons’ Long Range Reconnaissance Imager (LORRI) taken in July 2015 combined with color data from the Ralph instrument to create this enhanced color global view. NASA/JHUAPL/SwRI/Handout via REUTERS

The dunes, spotted on images taken by NASA’s New Horizons spacecraft during its 2015 flyby, sit at the boundary between a heart-shaped nitrogen glacier about the size of France called Sputnik Planitia and the Al Idrisi Montes mountain range made of frozen water, scientists said on Thursday.

“Pluto, even though it’s so far away from Earth and so very cold, has a riot of processes we never expected to see. It is far more interesting than any of us dreamed, and tells us that these very distant bodies are well worth visiting,” Brigham Young University planetary scientist Jani Radebaugh said.

The dunes cover about 775 square miles (2,000 square km), roughly the size of Tokyo. Their existence came as a surprise. There was some doubt about whether Pluto’s extremely thin atmosphere, mainly nitrogen with minor amounts of methane and carbon monoxide, could muster the wind needed to form such features.

Pluto, smaller than Earth’s moon with a diameter of about 1,400 miles (2,380 km), orbits roughly 3.6 billion miles (5.8 billion km) away from the sun, almost 40 times farther than Earth’s orbit, with a surface marked by plains, mountains, craters and valleys.

A mountain range on the edge of Pluto’s Sputnik Planitia ice plain – with dune formations clearly visible in the bottom half of the picture – is shown in this handout image taken during the July 2015 New Horizons mission. NASA/Johns Hopkins University Applied Physics Laboratory/Southwest Research Institute/Handout via REUTERS

Pluto’s dunes resemble some on Earth like those in California’s Death Valley and China’s Taklamakan desert, though their composition differs, Radebaugh said.

“Given we have dunes on the scorching surface of Venus under a dense atmosphere, and out in the distant reaches of the solar system at minus 230 degrees Celsius (minus 382 Fahrenheit) under a thin atmosphere, yes, dunes do have a habit of cropping up in a lot of surprising places,” University of Plymouth planetary scientist Matt Telfer said.