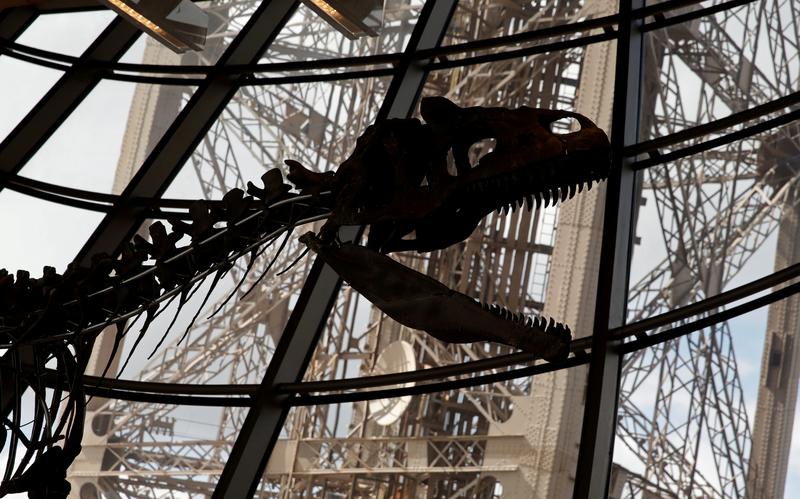 PARIS (Reuters) – The 9-metre long (30 ft) skeleton of a unidentified type of dinosaur, believed to be that of a new species, fetched more than $2.3 million at an auction staged on the first floor of the Eiffel Tower in Paris on Monday.

A dinosaur fossil is on display at the Eiffel tower, in Paris, France, June 2, 2018 ahead of its auction on Monday. REUTERS/Philippe Wojazer TPX IMAGES OF THE DAY

The fossil, dug up in the western United States in 2013, is known only to belong to a large, carnivorous dinosaur. Scientists who have studied it say there are several differences with known species.

“The buyer is French and he told me before the sale … ‘if I get it, I would present it to the public’ and this is amazing,” auctioneer Claude Aguttes said.

“Everyone will be able to see it, it will soon be lent to a museum, it will be studied by scientists, everything is perfect.”

The buyer and the seller, identified only as a British businessman, were both unnamed.

The sale had been expected to fetch up to $2.1 million.

French auction house Aguttes, which had previously sold a mammoth skeleton and that of another dinosaur, had said before Monday’s sale that the buyer might be able to name the new species, sparking objections from a U.S. scientific association.

The Society of Vertebrate Paleontology, had argued in a statement this might run counter to naming rules. It called for the auction to be canceled, saying that private ownership could limit the reach of scientific study even if the skeleton was then released to researchers.

Some of the proceeds from the auction will go to two charities working with endangered species, including cheetahs and ocean wildlife.