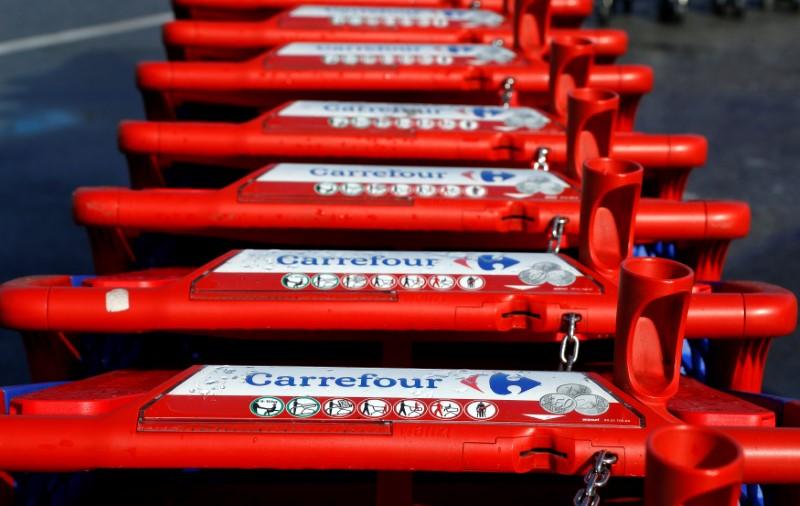 The logo of Carrefour is seen on shopping trolleys at the Carrefour Lingostiere in Nice, France, March 31, 2018. REUTERS/Eric Gaillard

Bompard, who took over as CEO in July 2017, said accelerating the company’s digital commerce expansion was an “absolute” priority in the face of competition from Amazon and other online rivals.

“Six months ago we were isolated. All the retail alliances were taking place without us. Now we have deals with Tencent and Google,” Bompard told the company’s annual shareholders meeting.

“Your company has become attractive again and is resolutely offensive. I am very proud of the Google partnership which shows that Carrefour is back at the highest level worldwide,” he said.

Europe’s largest retailer in January announced plans to cut costs and jobs, boost e-commerce investment and seek a partnership in China in an effort to lift profit and revenue and beat domestic rivals in the race to develop digital shopping products.

As part of these plans, Carrefour announced on Monday it was teaming up with Google to boost e-commerce on its home turf.

Carrefour has been a laggard in e-commerce and the Google deal is in line with Bompard’s plans to invest 2.8 billion euros in the sector by 2022, six times its past rate of investment.

It comes after a deal in March between Amazon and upmarket French chain Monoprix saw the U.S. online giant make further inroads into food retail in France.

Other digital initiatives from Carrefour have included the opening of its first high-tech store in Shanghai last month in partnership with Tencent.

The group also announced a five-year purchasing alliance with Systeme-U to makes Carrefour the biggest buyer in its competitive home market.

In April, however, Carrefour gave a cautious outlook for this year after sales growth slowed in the first quarter, with continued weakness in its core French market suggesting the supermarket chain faces a long road to recovery.

Shareholders on Friday backed Bompard’s 2017 pay plan and the package paid to former CEO George Plassat, who left on July 18, 2017.

Over 68 percent of votes cast approved Plassat’s 2017 payout, which included nearly 4 million euros in exchange for him committing not to join a competitor. The package drew whistles and boos from trade union representatives and individual shareholders at the meeting.

Advisory firm Proxinvest had recommended voting against Plassat’s payout, saying it was “too big in view of the group’s performance”.

In March, Carrefour unveiled a 34 percent cut to its annual dividend after it reported a net loss of 531 million euros for 2017 and a 14.7 percent fall in operating profit.

Bompard told shareholders he would make proposals to the board so that his own future departure package would not “stir a debate”.