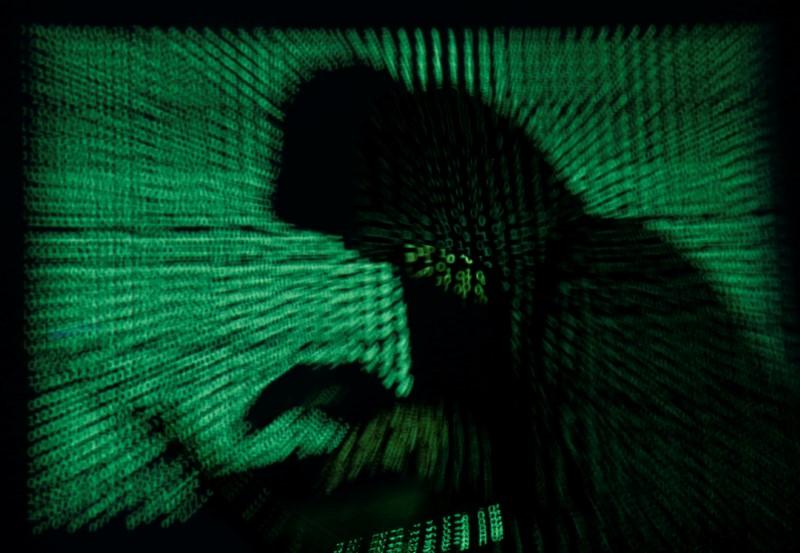 TAIPEI (Reuters) – Cyber attacks from China on Taiwan’s government computers are becoming more difficult to detect, a source close to government discussions said, as hackers increasingly use online platforms such as search engines to break into systems.

A hooded man holds a laptop computer as cyber code is projected on him in this illustration picture taken on May 13, 2017. REUTERS/Kacper Pempel/Illustration

While the frequency of attacks by China’s cyber army has declined, the success rate of such incursions is rising, the source said.

“Taiwan’s official departments suffer from hundreds of successful internet attacks each year, more than half of which come from assaults by China’s cyber army,” the person, who is not authorized to speak to the media and declined to be identified, told Reuters.

China has strongly denied accusations of engaging in cyber warfare or hacking, and has said it is itself one of the world’s biggest victims of such incidents.

Both China’s Taiwan Affairs Office and the Cyberspace Administration of China did not immediately respond to a request for comment.

The alleged cyber attacks come as Beijing increases diplomatic and economic pressure on the self-ruled island, which China claims as its own and considers a wayward province.

The source said hackers are adopting new techniques to conceal their activities.

“They frequently go through online platforms like Google and blogs, to hide themselves and give investigators the impression it is a normal platform or tool, and thus to ignore its background actions,” the person said.

Taiwan’s governmental departments face “frequent cyber attacks and scanning of their vulnerabilities, with the attack volume reaching 10 million a month,” the source said.

The majority of attacks targeted non-core service systems, were low-level in nature, and included activities such as changing websites and tampering with information. However, there have also been more serious attacks on core systems.

The source also said the Taiwan government had evidence that some of the attacks had targeted departments and their websites by intruding into servers and stealing account passwords.

Taiwan’s foreign offices abroad have also been targeted through methods such as taking screen snapshots, keylogging, and unpacking related information, the source said.

Many of the attacks were now routed through other countries, making it increasingly difficult to trace.

Since Taiwan President Tsai Ing-wen of the left-leaning Democratic Progressive Party took office in 2016, China’s hostility to the island has increased.

China fears Tsai wants to push for formal independence, although she says she wants to maintain the status quo and is committed to peace.

Analysts expect the cyber attacks will continue to form a headache for the Taiwan government.

“Taiwan has very good cyber defense and investigation skills and capacity. However, under such a huge amount of attacks and the special relationship across the Strait, it is really hard to prevent 100 percent,” said Lennon Chang, a senior lecturer in criminology at Monash University in Melbourne.

Taiwan is expected to release its information security and national security strategy later this year.