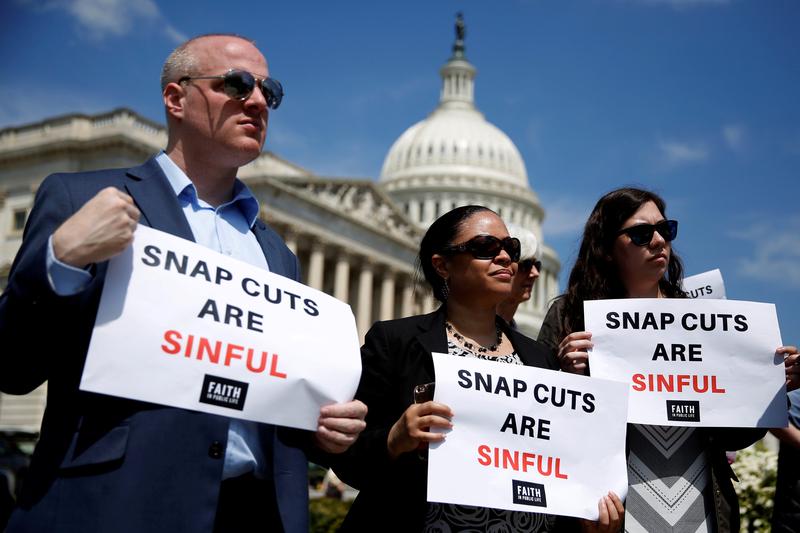 WEBSTER COUNTY, W.Va. (Reuters) – Bruce Green’s family of six scratches out a living in this remote, politically conservative corner of the Appalachian Mountains thanks in part to about $600 a month in U.S. food aid.

FILE PHOTO: People hold up signs protesting against cuts to the Supplemental Nutrition Assistance Program (SNAP) during a press conference on Capitol Hill in Washington, U.S., May 7, 2018. REUTERS/Joshua Roberts/Files

For the Greens and other rural Americans who get nutrition assistance, making ends meet could get tougher if Republicans in Washington, including President Donald Trump, carry out plans to make it harder to qualify for food aid.

“If I lose even $100 of that, it would be devastating,” said Green, 35, a registered independent voter who said he “leans conservative.” He earns $23,000 annually as a county appraiser. Green’s wife Barbara stays home with their four children.

A Republican plan to curb food aid is under consideration in the U.S. House of Representatives as part of a broad farm bill. Its future is uncertain, with Democrats opposed to it. A farm bill in the U.S. Senate proposes no major food aid changes.

The House plan is an initial step in a welfare-cutting push by Republicans that could play out for years if the party keeps control of Congress in November’s midterm election. Should it become law, about 1.2 million fewer individuals would receive benefits monthly by 2028, nonpartisan congressional budget analysts estimated.

After approving tax cuts in December that are projected to add $1.9 trillion to the U.S. debt over a decade, Republicans, led by Trump, want to trim the social safety net. That includes the Supplemental Nutrition Assistance Program (SNAP), formerly known as food stamps.

SNAP helps feed more than 40 million Americans each month by supplying recipients with debit cards good only for food purchases. That is 12 percent of the total U.S. population. Republicans say an improving economy means fewer Americans need help from SNAP.

FILE PHOTO: A man holds up a sign protesting against cuts to the Supplemental Nutrition Assistance Program (SNAP) during a press conference on Capitol Hill in Washington, U.S., May 7, 2018. REUTERS/Joshua Roberts/Files

Webster County is part of a demographic that is rural, white, SNAP-dependent and increasingly Republican. Trump won 77 percent of the county’s votes.

But residents say they have seen no economic upturn. Unemployment this year has been as high as 7.7 percent, well above the national rate. Coal mines have closed. A natural gas pipeline is under construction and provides well-paying but temporary jobs. Nearly a third of county households use SNAP.

Of the 50 U.S. counties with the most SNAP-dependent populations, three-quarters are rural. About half of those backed Trump in the 2016 presidential election. Webster County, represented by a House Republican, is in one of the 20 U.S. congressional districts with the highest percentages of SNAP-dependent households.

State governments manage SNAP. Washington pays for the aid at a cost of about $70 billion annually. The total federal budget exceeds $4 trillion.

Under present law, most childless adults must work at least 20 hours a week, or be in job training, to receive SNAP for more than three months.

States can waive the three-month limit in high-unemployment areas. This was widely done in the 2007-2009 recession, but many states, especially those led by Republican governors, are ending waiver use as the economy recovers.

The House Republican proposal would put new limits on state waivers. It would expand the number of non-disabled individuals subject to work requirements by raising the top age to 59 from 49 and including more people caring for school-age children, such as Barbara Green.