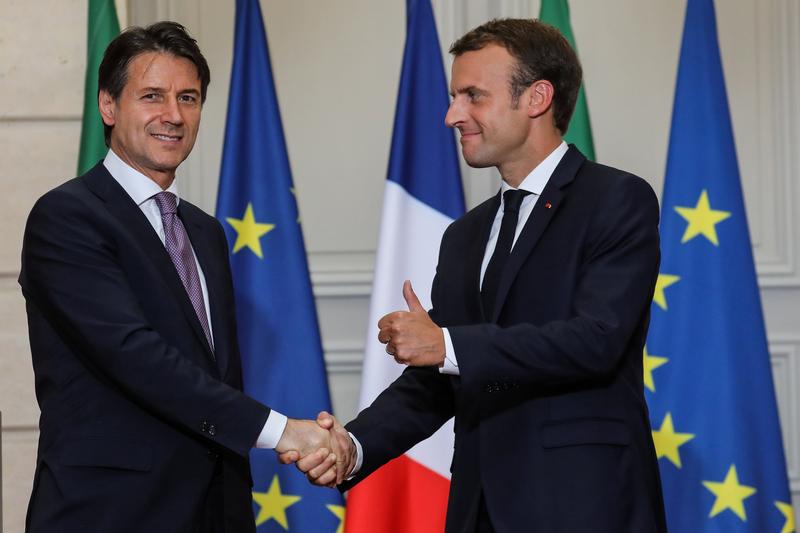 PARIS (Reuters) – President Emmanuel Macron on Friday urged Italy’s new prime minister to work with France, Germany and Spain on resolving migration issues rather than siding with an anti-immigration “axis” emerging within the European Union.

Smiling and calling each other “my friend”, Macron and Italian premier Giuseppe Conte sought to bury the hatchet in Paris after a diplomatic squabble erupted this week over Rome’s refusal to accept a migrant rescue ship at its ports.

There is concern in Paris over what stance Italy’s anti-establishment government, led by lawyer Conte and with the head of the populist League party as deputy, will take on pan-European issues such as euro zone integration and asylum.

“I hope deeply that France and Italy will work hand-in-hand, together, to propose and contribute European solutions, in particular with partners like Spain and Germany,” Macron said during a news conference with Conte alongside.

The row between Paris and Rome over the fate of the Aquarius, a ship with more than 600 migrants aboard, including women and children, drew in Pope Francis and sewed division across Europe, straining German Chancellor Angela Merkel’s fragile coalition.

On Wednesday, Italy had summoned France’s envoy and demanded an apology from Macron, who had said Rome’s move to block the ship from its ports was an act of “cynicism and irresponsibility”. After Italy demanded an apology, Macron said he had not meant to offend “Italy and the Italian people”.

The two leaders on Friday avoided reporters’ questions about their verbal jousting earlier in the week and tried to present a united front.

“There have been days that were a little tumultuous, but we are in perfect agreement,” said Conte, who only two days ago had described France’s stance on immigration as “hypocritical”.

Conte said there was a need to create European-run immigration offices outside Europe in order to handle asylum requests in order to prevent “voyages of death”.

More than 3,000 migrants died attempting to cross the Mediterranean in 2017, the fourth straight year that the death toll has topped this figure, according to the U.N. Migration Agency (IOM).

Most migrants attempting to reach Europe from Africa take the sea route from Libya to Italy, but last year saw a spike in the number of people departing from Morocco to Spain instead.

AXIS OF THE WILLING

The origin of the dispute between France and Italy lies in Europe’s inability to share responsibility for handling the influx of migrants fleeing war and poverty, largely in Africa and the Middle East, since the outset of the migration crisis in 2014.

Immigration has increasingly defined politics across the European Union, from France and Germany to Hungary, Italy and Austria. An EU poll showed that the issue is the top concern of European voters. A senior German diplomat said last year that it was a greater threat to EU stability than the euro zone crisis.

Earlier this week, Germany’s interior minister, who hails from the conservative CSU party in Bavaria, said his country should form an “axis” on migration with Austria’s right-wing government and Italy at interior ministers’ level.

Macron said talk of such an axis was a reminder of Europe’s darkest times — Germany and its allies were referred to as the Axis powers during World War Two — and said that only a country’s leader could speak for the people.

Conte appeared to dismiss joining forces with a small group of member states that would go it alone with a tougher line on immigration.

He said he “agreed with the words of my friend Macron” regarding the need for an EU-wide approach to reforming the rules on immigration.

“I would like an axis of the willing that includes all the European countries,” he said.

Reporting by Michel Rose and Richard Lough in Paris, and Gavin Jones and Steve Scherer in Rome; Writing by Richard Lough and Geert De Clercq; Editing by Luke Baker