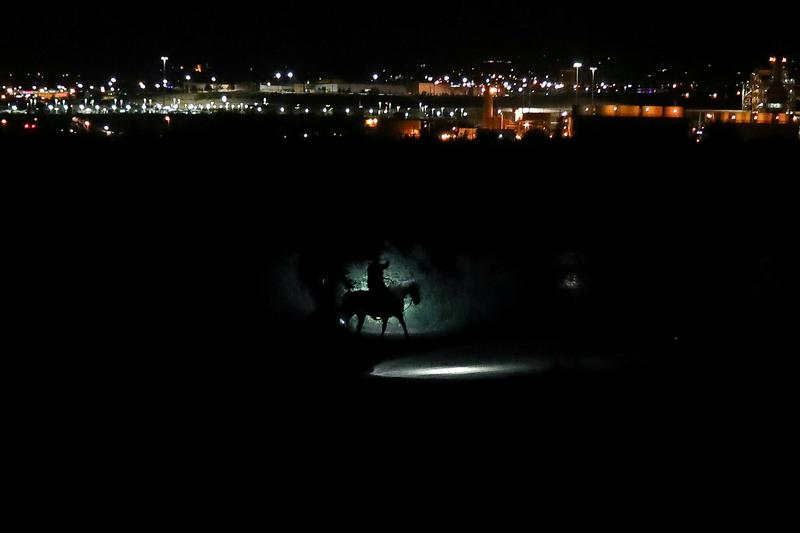 WASHINGTON (Reuters) – Republican efforts to debate immigration legislation next week in the U.S. House of Representatives were in turmoil on Friday after President Donald Trump blasted one of two delicately crafted proposals that had a better chance of passing.

Border Patrol agents on horses track a man along the Rio Grande River after he illegally crossed into the U.S. from Mexico in Sunland Park, New Mexico, U.S., June 15, 2018. REUTERS/Adrees Latif

After the president’s move, House Speaker Paul Ryan’s leadership team suspended their Friday plans to build support for a draft bill protecting 1.8 million “Dreamers” from deportation and allowing them a path to citizenship.

The Dreamers are a group of immigrants, mostly Hispanic, who were brought illegally over U.S. borders when they were children and have been living for years in limbo. While most have attended American schools, they have also lived under the threat of deportation.

Trump, in an interview with Fox News Channel, said, “I certainly wouldn’t sign the more moderate” of the two bills. He added, “I need a bill that gives this country tremendous border security. I have to have that.”

Trump’s declaration took lawmakers by surprise. Ryan had kept the president and his White House team abreast of the legislation he was negotiating among House Republicans, according to Republican lawmakers.

Attempts to achieve Republican consensus in Congress on passing legislation to address the status of Dreamers were already facing difficulties before Friday. Now they are further in doubt.

“Until we know exactly where he’s (Trump) at and his concerns have been satisfied, I think things will be on hold,” said veteran Republican Representative Tom Cole.

Later on Friday, Trump tweeted: “Any Immigration Bill MUST HAVE full funding for the Wall, end Catch & Release, Visa Lottery and Chain, and go to Merit Based Immigration. Go for it! WIN!”.

Both the Republican bills under discussion, which have been blasted by Democrats and immigration advocacy groups as being too harsh, would fund the wall Trump wants to build on the southwest border with Mexico. And both would cut legal migration, in part by denying visas for some relatives of U.S. residents and citizens who are living abroad.

House leadership aides were noncommittal about whether the immigration debate would go ahead next week, saying only that they were seeking clarity from the White House.

Children interact with members of the Presbyterian church in Sunland Park, U.S. at a new section of the border wall on the U.S.-Mexico border after a liturgy to commemorate the religious dimensions of migration, in this picture taken from Anapra neighborhood in Ciudad Juarez, Mexico May 3, 2018. REUTERS/Jose Luis Gonzalez

While more moderate House Republicans argued that Trump may have either misspoke in the Fox interview or was not fully briefed on the legislation, one influential conservative told reporters that the president knows exactly what is in the legislation.

“I think he (Trump) understands what’s in the bill and what’s not in the bill,” said Representative Mark Meadows, who heads the hard-right House Freedom Caucus and has close ties with Trump.

Meadows supports the more conservative bill, seen as having lower prospects of passing the Republican-controlled House. It would deny Dreamers the chance of future citizenship.

Last September, Trump announced that he was ending the Deferred Action for Childhood Arrivals (DACA) program created by then-President Barack Obama in June, 2012. Trump set a March 5, 2018 deadline for Congress to replace DACA.

The deadline was never met.

Hundreds of thousands of Dreamers have won temporary protections from deportation under DACA that is now under review in federal courts.

Since last September, Trump’s conflicting messages about Dreamers and immigration legislation has helped create a chaotic atmosphere both in Congress and for the Dreamers.