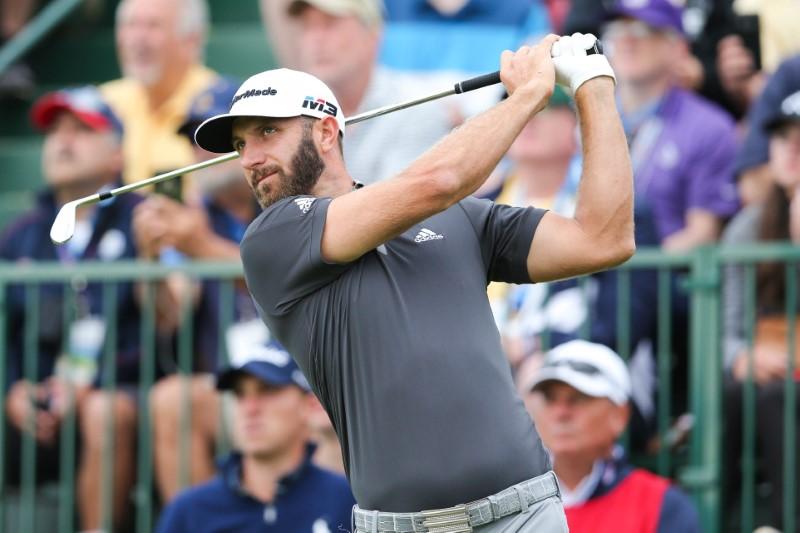 SOUTHAMPTON, N.Y. (Reuters) – Dustin Johnson played like the world number one that he is, taking a stranglehold on the U.S. Open with a five-shot clubhouse lead after his second round at Shinnecock Hills on Friday.

Johnson, part of a four-way tie for the overnight lead, jumped clear by taking advantage of relatively benign morning conditions for a three-under-par 67.

He capped off his day at his 16th hole, the par-three seventh, curling in a 45 foot birdie putt that trundled downhill before trickling in to the hole as fellow competitor Tiger Woods looked on with admiration and perhaps a tinge of envy.

After strong winds sent scores soaring on Thursday, the breeze abated slightly, though a light mid-morning rain made playing conditions miserable for an hour or so.

“Today was really solid in some tough conditions,” Johnson said after posting a four-under 136 halfway total.

Englishman Tommy Fleetwood shot the best score of the championship, a six-birdie 66, while Swede Henrik Stenson used his renowned iron game for a 70.

The two Europeans were closest to Johnson among the morning wave of players, both at one-over 141, one shot better than American Russell Henley (73).

Henley was cruising until he took three hacks to extricate himself from knee-high fescue rough at the third hole, his 12th, running up triple-bogey.

Woods was destined to miss the cut after carding 72 for 10-over.

Yet while he packed to go home, Johnson will probably sleep on the lead — although he is not counting any chickens.

“There’s still 36 holes left no matter what position I’m in,” he said.

“I’m going to stick to my game plan, stick to trying to play the holes how I have the first couple of days and see what happens.”

Fleetwood was delighted with his position, considering where he had been some 18 hours earlier when he was thinking more about the cut than the leaderboard.

“I was six-over through 15 yesterday,” he said.

“I know Dustin’s going well but I’m all of a sudden in a position where I can have a good round tomorrow and be up there for Sunday, hopefully.”

“It is the ultimate test of golf in more ways than one,” he said.

“It tests your long game, short game, every aspect. It tests you mentally, physically. If you’re going to win a U.S. Open, it should be that kind of test.”

Englishman Ian Poulter and American Scott Piercy, who shared the first-round lead with Johnson and Henley, had afternoon tee times on Friday.

Reporting by Andrew Both; editing by David Stamp and Ian Chadband