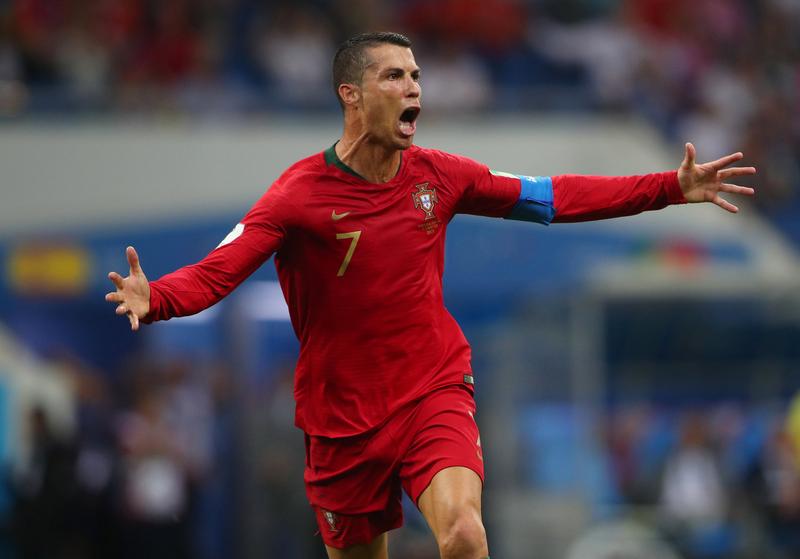 SOCHI, Russia (Reuters) – Portugal captain Cristiano Ronaldo lit up the World Cup in his own inimitable style on Friday, curling in a late free kick to complete a remarkable hat-trick and earn his team a 3-3 draw in an enthralling clash with neighbors Spain.

In by far the best game of the tournament so far, Ronaldo twice put Portugal in front, Diego Costa replied each time, Nacho gave Spain the lead with a stunning volley and Ronaldo then had the last word with a superb free kick he won himself.

Ronaldo has a relatively poor free-kick record for Portugal and when he and Raphael Guerreiro both stepped up in the 88th minute, many of their fans might have hoped the left back would have been allowed to have a go instead of his skipper.

Instead, Ronaldo stood with his legs apart in familiar pose, rolled up his shorts and curled an exquisite effort around the Spain wall and into the net past the helpless David de Gea.

The 33-year-old, who took his tally to 84 goals in 151 games for the European champions, became the fourth player to score in four World Cups after Brazil great Pele and Germany’s Uwe Seeler and Miroslav Klose.

He also became the first player to score in eight major tournaments in succession after hitting the target in the last four European Championship tournaments.

The goal denied Spain what would have been a morale-boosting win after a traumatic and extraordinary week which saw coach Julen Lopetegui sacked on Wednesday, barely 48 hours before kick off in the Group B game.

The Spanish federation said Lopetegui had negotiated a contract to take over at Real Madrid without their knowledge, and replaced him with Fernando Hierro who took charge on Friday.

Nacho’s first goal for Spain and a blunder by their usually reliable keeper David De Gea were almost lost in the drama.

The other match in the section was pedestrian by comparison yet it was Iran who went top of the standings with three points after their 1-0 stoppage-time win over Morocco.

“I’m very happy, it is a personal best (the hat-trick), one more in my career and the most important thing is to highlight what the team has done,” said Ronaldo.

The match got off to an explosive start when Ronaldo beat Nacho on the left of the box with a stepover, was tripped and emphatically converted the penalty himself.

Spain quickly got into their stride and Costa equalized in the 24th minute as he latched onto a long ball forward by Sergio Busquets, bundled off a challenge from Pepe, slipped around two defenders and slotted his shot past Rui Patricio.

The goal was confirmed after the incident was reviewed by the video assistant referee (VAR), being used at the World Cup for the first time, for a possible foul on Pepe.

Spain appeared to be on top as Isco rifled a shot against the bar, only for Ronaldo to strike again one minute before halftime with the help of De Gea’s blunder as the ball hit his hand and slipped agonizingly into the net.

Costa leveled from close range 10 minutes after the break, Spain went ahead for the first time with a remarkable strike from Nacho, who met the ball on the volley at an awkward height and sent an inswinging shot in off the post.

Spain thought they had won the game but Portugal had other ideas as Ronaldo provided the perfect end to another extraordinary night in his career.

Hierro was clearly happy after his first match in charge as his team showed they should by no means be written off.

“We feel very proud of the players after the adversity of the match itself,” he said. “We’ve come back and equalized twice, we feel great commitment and pride.”

Writing by Brian Homewood in Moscow; Editing by Ken Ferris