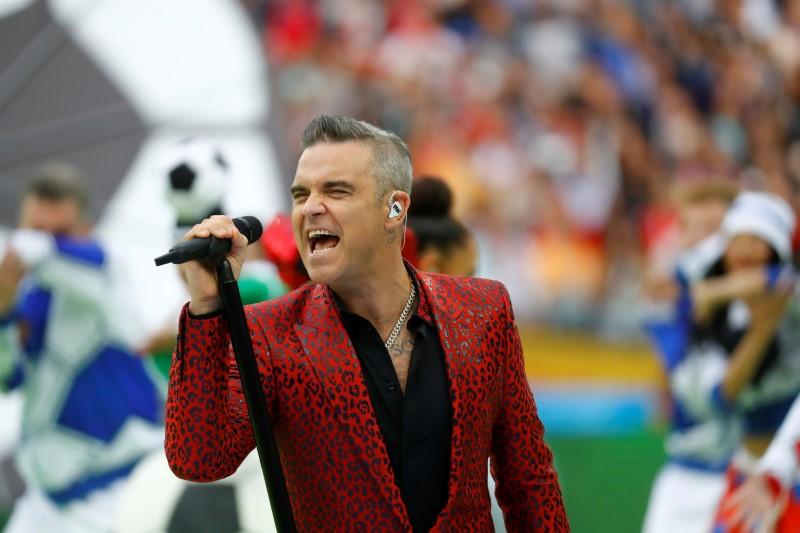 MOSCOW (Reuters) – One of the directors of the World Cup opening ceremony in Russia on Friday downplayed an obscene gesture made by Robbie Williams at the event, saying he did not think the middle finger that the singer flipped to the camera was meant to offend Russia.

Williams took part in a glitzy 15-minute show at Moscow’s Luzhniki stadium on Thursday before the first match between Russia and Saudi Arabia.

At one point, when the camera zoomed in on him, the 44-year-old Briton raised his middle finger, a gesture regarded as obscene by many in Western culture.

“I can’t imagine what Robbie Williams meant by that gesture,” Ilya Averbukh, the show’s co-director, was quoted as saying by the RIA news agency. “As the choreographer, I didn’t put it in there.”

Averbukh said he did not believe Williams’ gesture was meant to insult Russians.

“I’m sure that this gesture had nothing to do with Russia,” he was reported as saying. “Williams did not want to offend our country with this gesture.”

FIFA and the singer’s public relations team did not immediately respond to requests for comment.

U.S. broadcaster FOX Sports issued an apology to viewers for showing the gesture.

“The 2018 FIFA World Cup opening ceremony was a newsworthy event produced by a third party and carried live on FOX,” FOX Sports said in a statement.

“As it was broadcast live, we did not know what would happen during Robbie Williams’ performance and we apologize.”

A long-time Kremlin critic had lambasted Williams for deciding to sing at the ceremony beforehand, while a campaign group had offered to brief him on Russia’s human rights record.

The singer’s PR team declined to comment, but Williams, who has previously sung at private parties organized by wealthy Russians, told Reuters he liked visiting the country and said performing at the opening ceremony was an honor.