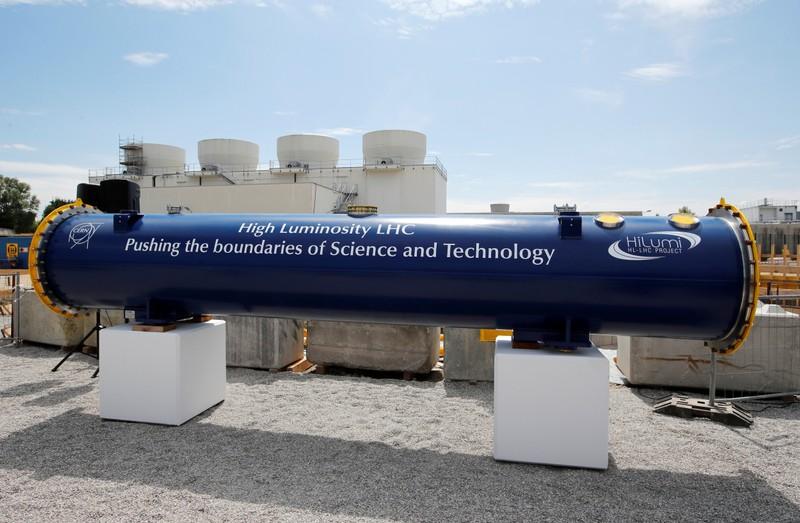 Staff said the overhaul will boost the “luminosity” of proton-smashing experiments at the LHC, a 27-km (17-mile) ring under the Swiss-French border, increasing the number of particle collisions tenfold and producing a clearer picture of the sub-atomic world.

“This will allow us to address new questions, the outstanding questions in fundamental physics, with more opportunity to find answers,” CERN Director-General Fabiola Gianotti told Reuters at the opening ceremony.

The decade-long upgrade, involving a materials budget of 950 million Swiss francs ($953 million), will allow the LHC to churn out more data about particle collisions every year than it has since its working life began in 2010, experts there said.

The upgrade will focus the beams of the protons that are smashed together – increasing luminosity – meaning more collisions and more chance of spotting something unusual.

Last year the LHC produced about 3 million Higgs bosons, the long-sought particle which, along with an associated forcefield, provided the answer to the question: where does matter get its mass from?

After the upgrade, CERN said the LHC will be producing at least 15 million Higgs bosons per year, allowing physicists to get better acquainted with one of their most recent discoveries.

They will also be seeking other particles, and looking for answers about anti-matter and the Big Bang at the start of the universe.

A magnet is pictured after a ceremony to launch the civil engineering works for the High Luminosity LHC Project (HL-LHC) at the European Organization for Nuclear Research (CERN) in Meyrin near Geneva, Switzerland June 15, 2018. REUTERS/Denis Balibouse

Gianotti said her hope was that the upgrade – akin to replacing your dingy 60-watt bedside lamp with an industrial floodlight – would provide answers about “dark matter”, which has never been seen but is known to exist because of its effect on the visible material around it.

“For me personally, solving the mystery of the dark matter of the universe would be something great,” she said. “Of course it would be fantastic to produce the dark matter particle in the collision of LHC beams.”

The value of the discoveries cannot be predicted, but they are expected to provide a boost to science and technology in future, potentially speeding up manufacturing processes or improving computing power.

Even the technologies needed to upgrade the LHC will break new ground, because focusing the proton beams that are smashed together will require new super-conducting magnets and electronics that have never been developed before, with potential spin-off benefits for society, Gianotti said.

Another unknown is whether the upgrade could bring more Nobel prizes for physics, which Peter Higgs and Francois Englert won in 2013 when the LHC vindicated their 50-year-old theory of a missing boson.

“We will see,” said Gianotti. “We’re in the hands of nature.”