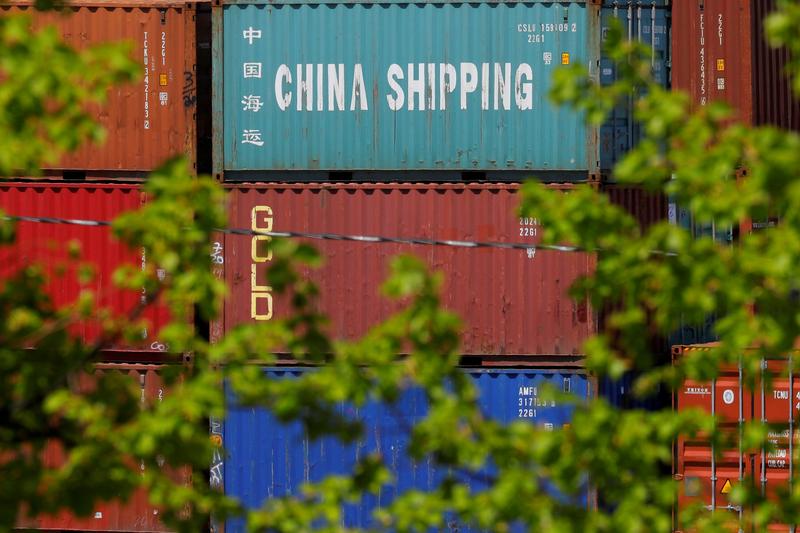 WASHINGTON (Reuters) – U.S. President Donald Trump’s new trade tariffs will lop at most a couple of tenths of a percentage point off U.S. growth and add a similar amount to inflation, small fry for a $19 trillion economy that is experiencing its second longest economic expansion on record.

On Friday, Trump imposed tariffs on $50 billion of imports from China, a move that came on top of hefty duties on steel and aluminum imports implemented at the start of June.

American consumers and businesses have taken the tariffs in their stride and the growing economy has brought in more workers, pushing unemployment down to levels not seen since the 1960s.

The costs have been manageable so far, with Commerce Secretary Wilbur Ross saying the metals tariff, for example, will add a few hundred dollars to the cost of a car.

Trade retaliation from China has so far been mainly confined to the farm sector, a small part of the overall U.S. economy.

The risks come at a time when the Federal Reserve has pushed interest rates into positive territory adjusted for inflation for the first time in over a decade, a move that will raise borrowing costs for consumers.

The president has already threatened to annul the North American Free Trade Agreement after a year of inconclusive talks with Canada and Mexico, and ordered an investigation into whether the U.S. should impose tariffs on auto imports because he says they threaten American economic security.

“Anti-trade policies, particularly tariffs, act like a tax on consumers and businesses by raising the cost of trade. By creating uncertainty, they also weigh on asset valuations, which could weaken households’ ability to sustain spending and reduce the incentive for businesses to invest,” said Gapen from Barclays.

‘A WAR OF EACH AGAINST ALL’

Trump’s expansion of unilateral trade action goes well beyond recent actions from the United States. Before Trump acted, the biggest measure was imposed in the 1980s when Washington forced Japan to limit exports of cars.

Trump’s top trade negotiator, Robert Lighthizer, was instrumental in that deal, which helped shield Detroit automakers from Japanese competition, but at a cost.

According to an estimate from economic think tank PERC, the additional sticker price cost to American consumers from those measures was $1,200 per car. Overall consumer losses from the restrictions amounted to $13 billion, the think tank said in a 1999 report.

China, Europe, Canada and Mexico have not folded in the same way that Japan did in the 1980s, and have already set their own tariffs in response to Trump’s moves.

U.S. allies have been exasperated by Washington’s refusal to negotiate exemptions for steel and aluminum tariffs and the issue boiled over at a meeting of the Group of Seven industrial nations earlier this month where Trump was left isolated.

“With regards to our allies in Europe, Japan, Canada, and elsewhere, there are real dangers in engaging in a ‘war of each against all,’ which could reduce the welfare of the entire world, including the United States,” Jeffry Frieden and Joel Trachtman of Harvard University and the Fletcher School of Law and Diplomacy at Tufts University wrote in a report on Friday.