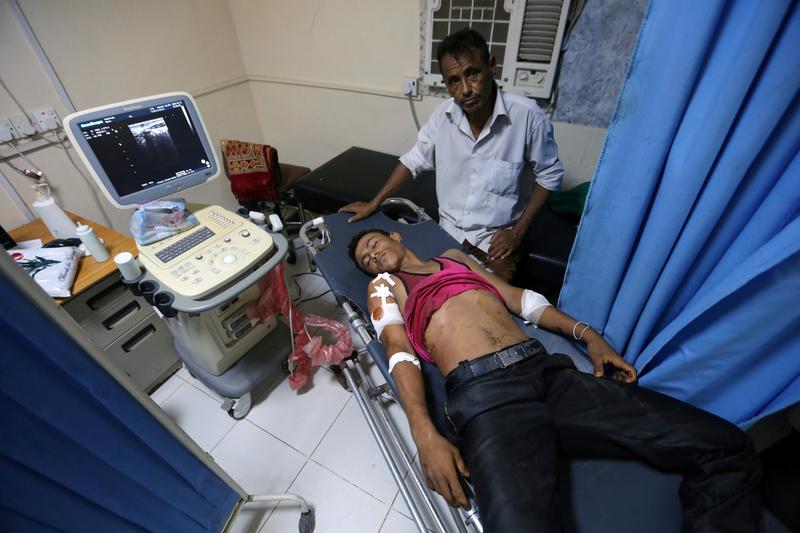 ADEN (Reuters) – Forces from an Arab alliance entered the airport in Yemen’s main port city on Saturday, the coalition-backed Yemeni military said, in the biggest offensive of the coalition’s war against the Iran-aligned Houthis.

A man stands by a relative, injured in clashes between government forces and Houthi fighters near Hodeidah, Yemen June 15, 2018. REUTERS/Abduljabbar Zeyad

Victory for the alliance in their first attempt to capture a strategic part of a well-defended city could put the Houthis in their weakest position since the conflict erupted three years ago.

A defeat would also cut off supply lines to the Houthi-controlled capital, Sanaa, and possibly force the movement to negotiate as the world’s biggest humanitarian disaster ravages the country.

“Army forces backed by the resistance and the Arab alliance freed Hodeidah international airport from the grip of the Houthi militia,” the media office of the pro-alliance Yemeni military said on Twitter on Saturday.

Troops have surrounded the main airport compound but have not seized it, a Yemeni military source and residents said.

“We need some time to make sure there are no gunmen, mines or explosive in the building,” the military source said. The military’s media office said technical teams were de-mining the surrounding area.

Fighting in the airport area led to the closure of the northern entrance of Hodeidah, which leads to Sanaa, residents said.

That has blocked a key exit out of the city and made it more difficult to transport goods from the port, the country’s largest, to mountainous regions.

The United Nations, which failed to find a diplomatic solution to head off the assault, fears the fighting will cut off the only lifeline for most Yemenis.

The offensive in Hudeidah could trigger a famine imperiling millions of lives, the U.N. has warned. Around 22 million people in Yemen depend on the humanitarian aid efforts, with 8.4 million at risk of starvation.

Air strikes, blockades and fighting have killed more than 10,000 people since the war began in 2015. A Saudi-led alliance intervened then to restore an internationally recognized Yemeni government in exile and thwart what Riyadh and Abu Dhabi see as efforts by their archfoe, Iran, to dominate the region.

The U.N. special envoy to Yemen, Martin Griffiths, is due to arrive in Sanaa on Saturday.

“The U.N. envoy has accomplished nothing so far. He provides a cover for the continued aggression,” Houthi spokesman Mohammed Abdul-Salam said on Houthi-run media.

The Arab alliance, which launched the operation in Hodeidah four days ago, says it can seize the city quickly enough to avoid interrupting aid to the millions facing starvation.

Defeating the Houthis in Hodeidah in the biggest battle of the war could have ramifications far beyond the city of 600,000.

The Yemen conflict is part of a proxy war between Sunni Muslim Saudi Arabia and Shi’ite Iran across the Middle East.

President Donald Trump’s withdrawal from the international nuclear deal and his embrace of nuclear state North Korea has dealt a blow to Tehran and put it under pressure to entrench its interests in Arab countries.

Reporting by Mohammed Ghobari in Aden and Ghaida Ghantous in Dubai; writing by Michael Georgy, editing by Larry King