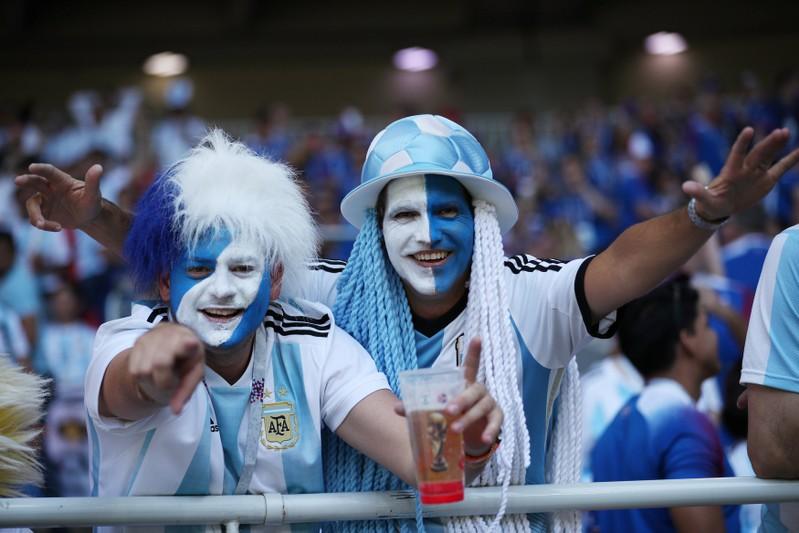 MOSCOW (Reuters) – Argentine fans visiting Russia for the soccer World Cup are keeping a wary eye on the sliding value of the peso, with some avoiding credit card spending and cutting back on unnecessary purchases.

Argentina’s peso has fallen nearly 11 percent in the last week and is down more than 34 percent since the beginning of the year to record lows versus the dollar, after weeks of currency volatility that led the government to seek a $50 billion lifeline from the International Monetary Fund.

For some Argentines in Russia, that means less money for luxury items such as souvenirs and mementos as they try to ensure the cash they bought ahead of the tournament – before the peso’s most recent slump – lasts the duration of their trip

Software engineer Carlos Obregon, who flew the almost 8,400 miles (13,500 km) from his home in Buenos Aires to watch his national side take on Iceland in Moscow on Saturday, said he was being more cautious with his spending because credit card purchases in rubles would now cost more in peso terms.

“I have enough cash, but I’ll have to be careful so I don’t run out. If I want to get some souvenirs for my family I will probably have to pay with card, and that’s more expensive,” he told Reuters on one of central Moscow’s bustling pedestrian alleyways next to Red Square.

“If I use the credit card too much, when I receive the letter at the end of the month I’m going to punch the wall.”

On the Moscow metro in a carriage full of Argentine supporters heading to the Spartak stadium for their national side’s first World Cup outing, 27-year-old Luciano Passarelli said he had reduced his daily spending.

“We planned the trip long ago so we weren’t going to change our plans. But it’s difficult, we can’t buy much here,” he said.

But for others, the chance to see Argentina and star player Lionel Messi play at the World Cup is worth the extra expense.

Bruno, an economist from Buenos Aires, said he was well aware of the additional costs he was incurring by living on his credit card while in Russia, but insisted he had no plans to reduce his spending.

“This is Argentina. It might be the last time that we see Messi play, so it’s worth the money,” he said. “Passion is more important than pesos!”