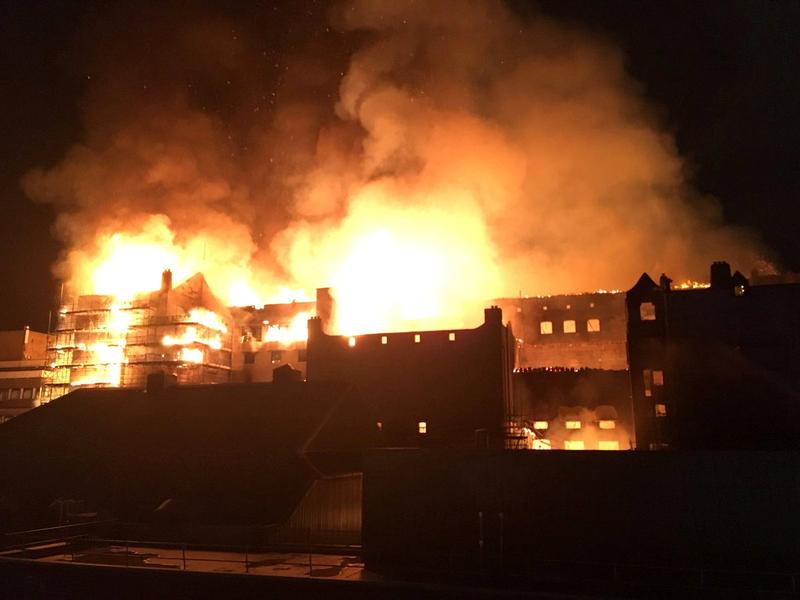 GLASGOW, Scotland (Reuters) – A major fire has torn through one of Scotland’s architectural gems, the Mackintosh building at the Glasgow School of Art, for the second time in four years.

More than 120 firefighters fought the blaze during the night as it gutted the 1909 building and spread to a theater and a nearby night club. No casualties were reported.

“The extent of the damage is very severe,” Peter Heath, deputy assistant chief officer of the Scottish Fire and Rescue Service, told reporters at the scene in Glasgow city center on Saturday morning.

He said the fire had “reached from the ground floor right through to the roof”.

The Mackintosh building had been due to re-open next year after millions of pounds in restoration works following a fire in May 2014.

“This is a devastating loss for Glasgow, absolutely devastating,” Heath said.

He said it was too soon to determine the cause of the fire, which would be investigated by multiple agencies.

The fire was first reported at about 20 minutes before midnight on Friday, when the city center was full of people enjoying a night out, including many School of Art students celebrating their graduation which took place earlier.

Heath said fire crews arrived within minutes to find that the blaze had taken hold throughout the building. The area was quickly evacuated and cordoned off as fire engines raced to the scene.

By morning the fire was under control, but smoke was still rising from the building as firefighters sprayed it from tall ladders. Heath said the theater was still on fire and its roof had partly collapsed, but the blaze was no longer spreading.

The rear elevation of the Glasgow School of Art is seen on fire, in Glasgow, Scotland, Britain, June 15, 2018, in this still image obtained from social media. TWITTER/@ Banpo_Monkey/via REUTERS

“Such a sad morning in Glasgow. So relieved that there has been no loss of life,” wrote Scottish First Minister Nicola Sturgeon on Twitter.

“But it is hard to find words to convey the utter devastation felt here and around the world for the iconic Mackintosh building,” she wrote.

The building is named after its architect, Charles Rennie Mackintosh, Scotland’s most influential designer. The School of Art’s website says the building “heralded the birth of a new style in 20th century European architecture”.

The British government’s Scotland minister, David Mundell, said he was devastated by news of the fire.

“It is only a fortnight since I was there to see the progress on the restoration, and my heart goes out to all those who had worked so hard on that. The UK Government stands ready to help, financially or otherwise,” he said in a statement.

Hundreds of people in Scotland and beyond took to social media to express their shock at news footage of the burning building, which some said was as symbolic for Glaswegians as Big Ben was for Londoners.

Many deplored what they called the cruel irony of the fire coming hours after a giant mural depicting Charles Rennie Mackintosh was unveiled elsewhere in Glasgow.

It features a portrait of the designer looking through a stained-glass window made in his own distinctive art deco style.

Reporting by Russell Cheyne in Glasgow and Estelle Shirbon in London; Editing by Larry King and Adrian Croft