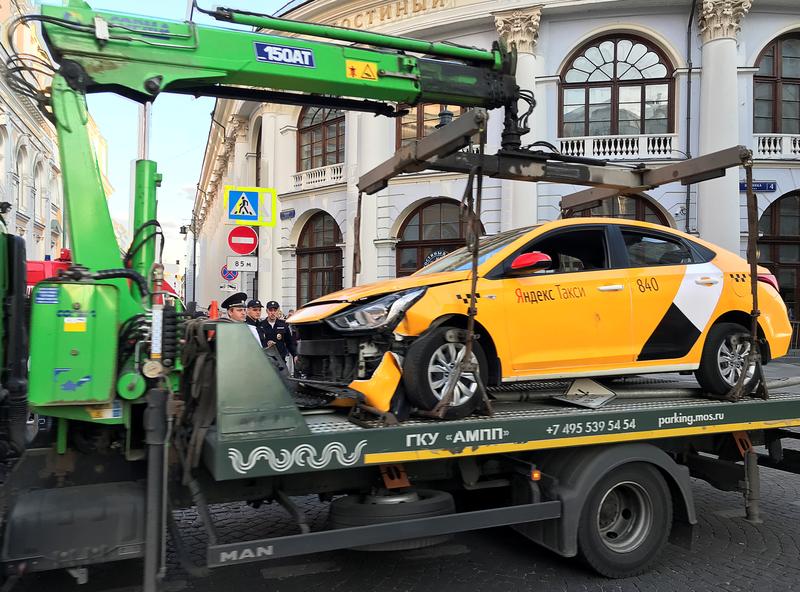 MOSCOW (Reuters) – A taxi drove into a crowd of pedestrians near Moscow’s Red Square on Saturday, injuring eight people including two Mexicans in the city for the soccer World Cup which Russia is hosting, officials and eyewitnesses said.

A damaged taxi, which ran into a crowd of people, is evacuated in central Moscow, Russia June 16, 2018. REUTERS/Jack Stubbs

The incident took place as residents and visiting soccer fans thronged the center of Moscow on a balmy summer evening, a short distance from the Kremlin.

Moscow’s traffic management authority said the taxi driver had a driver’s license issued in Kyrgyzstan, a mainly Muslim ex-Soviet republic. It cited the driver, who was in police custody, as saying he had not driven into the crowd on purpose.

Moscow Mayor Sergei Sobyanin said in a post on Twitter: “There was an unpleasant incident with a taxi. The driver lost control of the vehicle.”

The city’s police said they had opened a criminal investigation into a suspected violation of the traffic code.

Eight people were hurt and had been taken to hospital, Moscow city’s healthcare department said in a statement. It said seven were in a satisfactory condition, while one woman was seriously hurt.

The Mexican embassy in Moscow said two Mexican women had been lightly injured. Also among those hurt were a Ukrainian and two Russian citizens, Russia’s TASS news agency quoted a source in the emergency services as saying.

Video of the incident posted on social media showed the yellow Hyundai taxi pull sharply out of a line of stationery traffic, accelerate and mount the narrow pavement, which was packed with pedestrians.

The vehicle drove for about 10 meters along the pavement, bowling over pedestrians, with some of them being carried along on the bonnet of the car.

The taxi came to a halt after hitting a traffic sign. As bystanders tried to pull open the driver’s side door, the driver, dressed in black trousers and black T-shirt, jumped out and sprinted away.

More bystanders chased after him and could be seen trying to tackle him to the ground as the footage ended.

A witness told Reuters that some of the people hit were wearing Mexican team colors. Mexico take on Germany on Sunday in their first World Cup match at Moscow’s Luzhniki stadium, and thousands of Mexican fans are in the Russian capital.

A second witness at the scene told Reuters about the driver of the taxi: “He was pulled out of the vehicle, he ran off but bystanders apprehended him. He was shouting: ‘It wasn’t me’.”

A damaged taxi, which ran into a crowd of people, is evacuated in central Moscow, Russia June 16, 2018. REUTERS/Jack Stubbs

Another witness, Viktoria Geraimovich, said she called the emergency services on her mobile phone.

Describing the actions of the driver, she said: “He ran into a group of Mexicans. There were shouts, moans. He was only stopped because he hit a traffic sign.”

“Someone gave him a punch in the face. He stayed in the car, people came up to him, said what are you doing, punched him in the face, he opened the door and tried to run away.”

“It’s scary that it was in the center (of Moscow) and I was right opposite,” she said.

Moscow’s traffic management authority said the driver was not drunk and Interfax news agency cited a source saying there was no alcohol in his blood.

The same source told Interfax the driver had said he fell asleep at the wheel and accidentally pressed the accelerator pedal.

Russian authorities have vowed to host a safe soccer World Cup, which Russia is hosting for the first time ever. It is taking place in 11 cities until July 15.

In central Moscow, authorities have installed heavy concrete blocks across the entrances to pedestrianized areas following a spate of incidents in European cities in which vehicles were used to mow down people.

The Moscow traffic authority posted on Twitter a copy of what it said was the taxi driver’s license. It gave his name as Chingiz Anarbek Uulu and said he was born on April 22, 1990.

It gave his birth-place as the town of Kochkor-Ata in Kyrgyzstan, near the border with Uzbekistan.

An account on Russian social media platform Odnoklassniki for someone with the same name and date of birth was last updated two years ago.

The last video he posted on his page depicted chapter 82 of the Koran, Islam’s holy book, which discussed judgment day. There was nothing on the page to suggest any links to, or sympathies with, Islamist militant groups.

People walking around in central Moscow on Saturday evening said they were aware of the taxi incident, but it did not put them off spending time in the city. The streets were packed with people listening to street musicians perform, or sitting at pavement cafes.

“We didn’t expect something like this to happen in a place like this. It could happen anywhere in the world, but that it happens here in Moscow, in the middle of the World Cup, it’s shocking for us.”