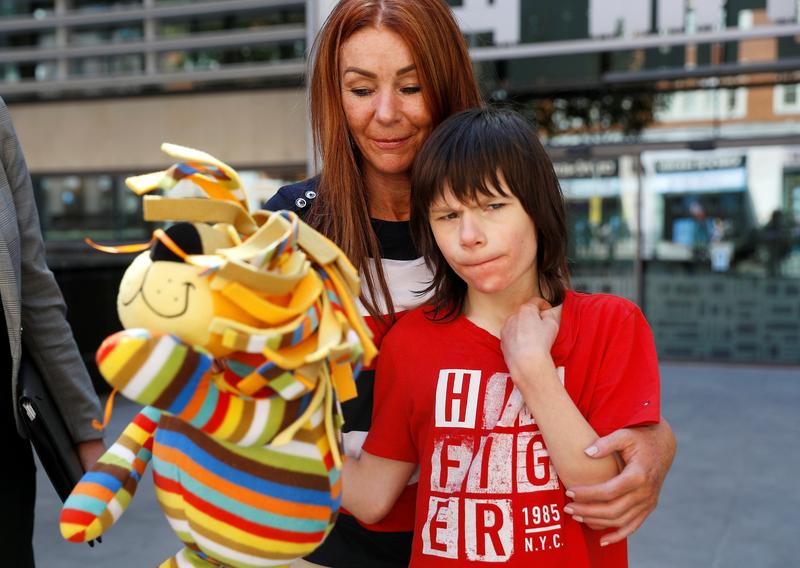 LONDON (Reuters) – Britain’s interior minister used an exceptional power on Saturday to release medicinal cannabis oil that had been confiscated from an epileptic boy who was later hospitalized suffering from seizures.

FILE PHOTO: Charlotte Caldwell, and her son Billy, stand outside the Home Office during a break in a meeting with officials to discuss how Billy can have his severe epilepsy treated with cannabis oil, which is a banned substance in Britain, in London, June 11, 2018. REUTERS/Peter Nicholls/File Photo

Billy Caldwell, 12, had traveled to Canada with his mother, Charlotte, to get the cannabis oil after Billy’s doctor was ordered to stop prescribing it, but when they flew back into London on Monday customs officials confiscated their supplies.

The boy was hospitalized on Friday after suffering several seizures.

His case has stirred debate on the therapeutic use of cannabis, with politicians from different parties backing the family and campaigners calling for changes to the law.

“This morning, I’ve used an exceptional power as Home Secretary to urgently issue a license to allow Billy Caldwell to be treated with cannabis oil,” the minister, Sajid Javid, said in a statement. “My decision is based on the advice of senior clinicians who have made clear this is a medical emergency.”

Charlotte Caldwell, who says Billy was free of seizures when he was using the cannabis oil, made a statement to reporters outside Chelsea and Westminster Hospital, where her son was being treated. She called for the law to be changed.

“No other family should have to go through this sort of ordeal, traveling halfway around the world to get medication which should be freely available to our desperately ill children,” she said.

“This is a wake-up call for our country. In the 21st century we need to have a more humane policy, not panic measures. I hope the government reflects upon what happened and what they’ve put our family through these last few days.”

The Home Office had previously said that while it was sympathetic to the child’s plight, it had a duty to stop banned substances from entering Britain.

Under British law, cannabis is listed as a schedule 1 drug, meaning that it is not recognized as having a therapeutic value. Schedule 1 drugs can be used for research purposes and clinical trials, but only under a Home Office license.

The Caldwell family, who normally live in Northern Ireland, have received support from several members of parliament from different political parties, including Dan Poulter of the ruling Conservative Party.

Billy Caldwell had been receiving medicinal cannabis oil on prescription by his family doctor for over a year, but supplies ran out after the Home Office ordered the doctor to stop prescribing it.