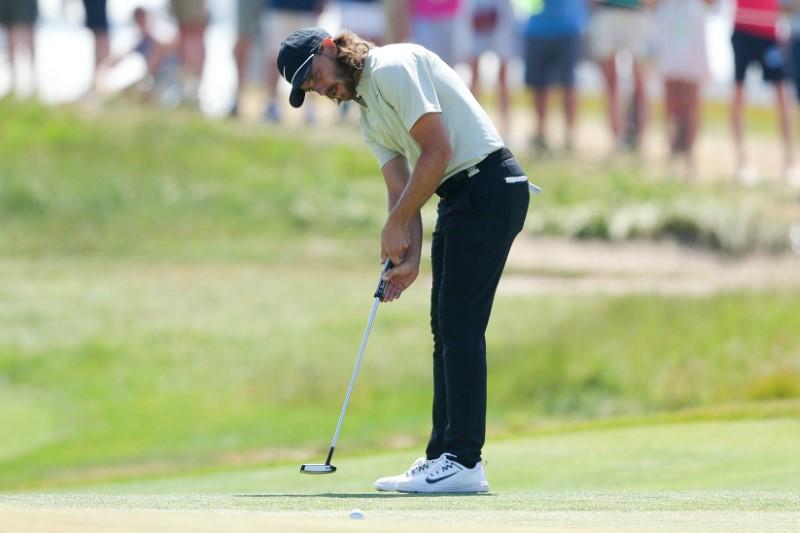 SOUTHAMPTON, N.Y. (Reuters) – Tommy Fleetwood matched the lowest score in U.S. Open history, a seven-under-par 63 in the final round on Sunday that gave the Englishman an outside chance of winning the championship.

Playing more than two hours ahead of the overnight leaders, Fleetwood reeled off four consecutive birdies from the 12th hole at Shinnecock Hills.

He had good chances to birdie the final three holes as well, but missed them all including an eight-footer at the last with history beckoning.

He set himself up for the first 62 at a U.S. Open after hoisting a six-iron from nearly 200 yards uphill and into the wind at the par-four 18th, his ball covering the flag the entire way before landing gently to leave him with an uphill putt.

Fleetwood misread the putt and missed on the low side.

His two-over 282 total left him one-stroke behind on-course leader Brooks Koepka, who set himself up with a great chance to become the first player to win consecutive titles since Curtis Strange in 1988-89.

“I honestly never really thought I was out of it,” said world number 12 Fleetwood, who started the day six strokes off the lead.

“I just needed a good start. Looking at the pins you knew they were going to be more accessible. Four-under after seven and it was game on.”

Fleetwood lamented missing a 12-foot birdie putt that he left short at the 16th, as well as the chance at the last.

“It was a little slower than I thought. I knew what it was for. I hit the putt I wanted. It’s so steep that green.”

Fleetwood, 27, was asked whether he thought his score might be good enough to win, in conditions that although demanding were not as difficult as on Saturday.

The greens were slower and softer, the pin positions were easier and the wind not quite as strong.

“If the set-up was like yesterday I’d feel a lot more comfortable,” said Fleetwood, a four-times European Tour winner.

“There’s nothing I can do now.”

As he settled in to watch the rest of the round on TV, Koepka birdied the 10th hole after flicking a precise approach shot to take a two-shot lead at even par.

But no sooner had he seemingly grabbed the championship by the throat than he misjudged his tee shot at the par-three 11th and watched his ball rocket over the crowned green and hurtle way beyond into rough.

He did well to salvage bogey, going to the 12th tee at one-over, with a one-shot lead over Fleetwood.

Dustin Johnson was two behind after 11 holes in what seemed to have become a three-horse race, with nobody else better than four-over.

Reporting by Andrew Both; Editing by Gene Cherry