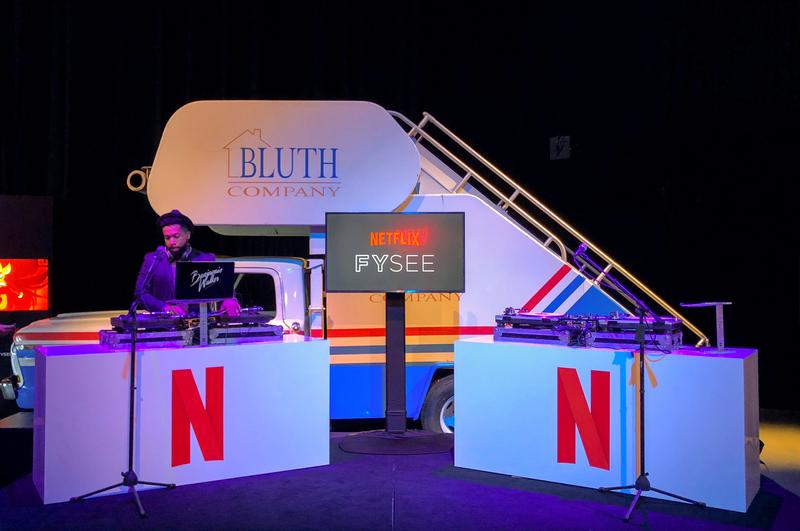 Netflix displays a prop from “Arrested Development” at an exhibition promoting the company’s shows for Emmy consideration in Los Angeles, California, U.S., May 6, 2018. Picture taken May 6, 2018. REUTERS/Lisa Richwine

The legendary British composer, creator of classic shows such as “Cats” and “Phantom of the Opera,” said he rarely performs in public. But despite dozens of other awards, Lloyd Webber has never won an Emmy. And with a record number of shows vying for the television industry’s highest honors, networks are amping up the star power and getting creative to shine a spotlight on their Emmy contenders.

Networks are going all out because an Emmy win, or even a nomination, can help build buzz for a show in a crowded sea of programming. That helps attract new viewers to traditional TV channels, and more subscribers for streaming services from outlets such as Netflix Inc (NFLX.O), AT&T Inc’s (T.N) HBO, or Amazon.com Inc (AMZN.O).

The Nat Geo cable channel brought “Genius: Picasso” star Antonio Banderas to the Los Angeles County Museum of Art, where guests mingled amid some of Picasso’s original works. Earlier that night, Netflix staged a discussion with the very private Barbra Streisand about her latest concert film.

“Everybody in a way has become an underdog,” said Michele Robertson, a long-time Hollywood publicist and awards consultant. “There is no slam dunk. Everybody feels like they’ve got to up their game.”

With so many entries clamoring for attention, the Television Academy, the group that hands out the Emmys, changed its rules this year to allow multiple Emmy promotional events on the same day, and on weekends as well as weekdays.

The result? The number of Academy-sanctioned events increased to more than 100 from 61 last year, the organization said.

Netflix displays a costume from “The Crown” series at an exhibition promoting the company’s shows for Emmy consideration in Los Angeles, California, U.S., May 6, 2018. Picture taken May 6, 2018. REUTERS/Lisa Richwine

Contenders will learn if their efforts paid off on July 12, when Emmy nominations are announced after tabulating the votes of more than 23,000 actors, writers, technicians and other members of the Television Academy.

Voting started June 11 and ends June 25. Winners will be unveiled on Sept. 17 at the televised Emmy awards ceremony.

The competitive field is packed. TV channels and streaming services released a record 487 scripted original series last year, more than double the 216 in 2010, according to data compiled by cable network FX. That does not include documentaries, reality competitions, late-night shows and musical specials.

A few years ago, Emmy campaign events were largely limited to panel discussions with creators and actors. Those still exist, but networks are trying different approaches.

ABC, part of Walt Disney Co (DIS.N), for the first time held a day-long event on the Disney studio lot, offering selfies with the cast of “The Goldbergs” and a performance by “American Idol” winner Maddie Poppe along with panels.

“We chose to showcase several of our shows and talent on one day in order to maximize voters’ time, which is a precious commodity right now,” ABC Studios President Patrick Moran said.

Netflix held 43 events in New York and Los Angeles from February through June.

The streaming service hosted most of its events over five weeks in May and June at an interactive exhibit where guests could play the 1980s video games seen in “Stranger Things,” draw graffiti on a car from “American Vandal,” or hear the rumble of rushing cattle in a Western-themed bar from “Godless.”

Smaller networks are trying to compete. The Viceland cable channel sent a plane hauling a banner to promote late-night show “Desus & Mero” to fly over competitors’ events and popular executive lunch spots. It also papered cars in studio parking lots with faux parking tickets urging a look at the show.

“We have really old-school, grassroots tactics,” said Meghan Kirsch, Viceland’s senior vice president of marketing and creative. “We don’t have the millions and millions of dollars to spend, so we have to be creative.”