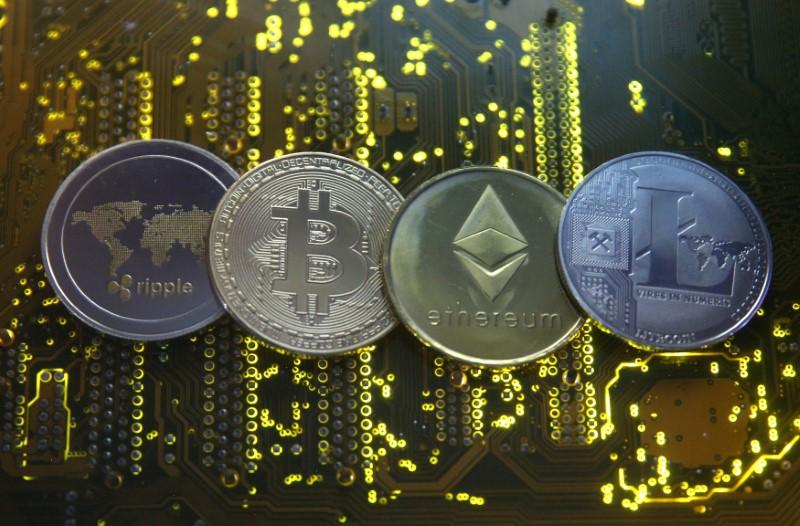 LONDON (Reuters) – Cryptocurrencies are not scalable and are more likely to suffer a breakdown in trust and efficiency the greater the number of people using them, the Bank of International Settlements (BIS)said on Sunday in its latest warning about the rise of virtual currencies.

Representations of the Ripple, Bitcoin, Etherum and Litecoin virtual currencies are seen on a PC motherboard in this illustration picture, February 14, 2018. REUTERS/Dado Ruvic/Illustration

For any form of money to work across large networks it requires trust in the stability of its value and in its ability to scale efficiently, the BIS, an umbrella group for the world’s central banks, said in its annual report.

But trust can disappear instantly because of the fragility of the decentralized networks on which cryptocurrencies depend, the BIS said.

Those networks are also prone to congestion the bigger they become, according to the BIS, which noted the high transaction fees of the best-known digital currency, bitcoin, and the limited number of transactions per second they can handle.

“Trust can evaporate at any time because of the fragility of the decentralised consensus through which transactions are recorded,” the Switzerland-based group said in its report.

“Not only does this call into question the finality of individual payments, it also means that a cryptocurrency can simply stop functioning, resulting in a complete loss of value.”

The BIS’ head of research, Hyun Song Shin, said sovereign money had value because it had users, but many people holding cryptocurrencies did so often purely for speculative purposes.

“Without users, it would simply be a worthless token. That’s true whether it’s a piece of paper with a face on it, or a digital token,” he said, comparing virtual coins to baseball cards or Tamagotchi.

The dependency of users on so-called miners to record and verify crypto transactions is also flawed, according to the BIS, requiring vast and costly energy use.

It has issued a series of warnings this year after an explosive rise in cryptocurrency values attracted a wave of followers.

Agustin Carstens, general manager of the BIS, has described bitcoin as “a combination of a bubble, a Ponzi scheme and an environmental disaster”. [nL8N1PV5KS]

The BIS has told central banks to think hard about the potential risks before issuing their own cryptocurrencies.

No central bank has issued a digital currency, though the Riksbank in Sweden, where the use of cash has fallen, is studying a retail e-krona for small payments.

The BIS also said in its annual report that effective regulation of digital coins needed to be global, targeting both regulated financial institutions as well as companies offering crypto-related services.