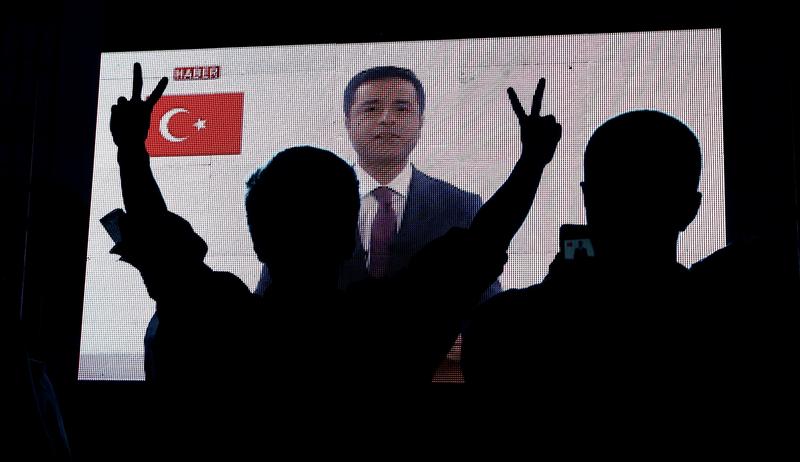 ANKARA (Reuters) – The jailed presidential candidate for Turkey’s pro-Kurdish opposition made his first television appearance in over a year and a half on Sunday, giving a campaign speech ahead of next week’s elections.

Supporters of Turkey’s main pro-Kurdish Peoples’ Democratic Party (HDP) watch the jailed former leader and presidential candidate Selahattin Demirtas as his first television appearance in over a year and a half is seen live on a huge screen during campaign event in Istanbul, Turkey, June 17, 2018. REUTERS/Huseyin Aldemir

Selahattin Demirtas, who has been in detention for close to 20 months on security charges and faces a sentence of up to 142 years if convicted, was nominated by his Peoples’ Democratic Party (HDP) as a candidate last month.

One of Turkey’s best-known politicians, he has had to run his campaign mostly through social media from his prison cell in the northwestern city of Edirne, while Turkish media have been saturated with coverage of President Tayyip Erdogan and his ministers.

Speaking on state broadcaster TRT in a scheduled 10-minute address, to which he is entitled under election law, Demirtas said voting for Erdogan and his ruling AK Party would mean putting the fate of the country “between one man’s two lips”.

“The only reason I am still here is that the AKP is scared of me. They think tying my hands here and going from square to square spreading accusations about me is being courageous,” a visibly thinner Demirtas said.

“They are openly violating the constitution by declaring me guilty even though there is no conviction ruling against me, and are trying to direct the public by misinforming them,” he said.

The snap parliamentary and presidential elections on Sunday will herald the switch to the new powerful executive presidency narrowly approved in a referendum last year.

In previous elections, Demirtas won votes beyond his core Kurdish constituency, and is likely to draw significant backing in the first round of the presidential vote, while boosting the prospects of his party entering parliament.

Demirtas’s HDP arranged a viewing of his speech in Istanbul’s Bakirkoy Square, where hundreds of supporters gathered to watch.

“You should have no doubt that I will be acquitted in front of the law as soon as possible. So long as the judicial authorities follow the superiority of the law and not the government’s expectations,” Demirtas said, as supporters cheered and waved flags.