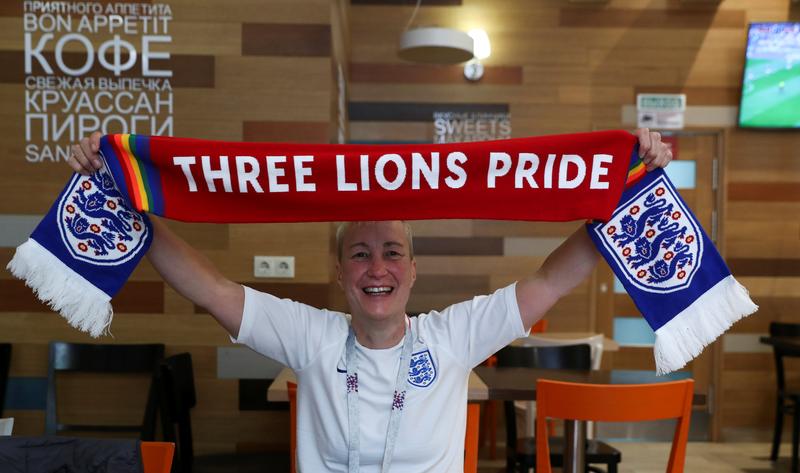 VOLGOGRAD, Russia (Reuters) – England fan Di Cunningham plans to fly the flag – quite literally – for gay rights in Russia on Monday night, where she will be cheering on the Three Lions’ in their World Cup opener against Tunisia.

Cunningham, an LGBT campaigner who works with England’s football authorities, is one of only a handful of openly gay England fans who have made the trip to Russia where gay activists have been detained for taking part in demonstrations.

She plans to wait until she is inside the stadium on Monday night before unfurling an England banner which combines the cross of St George and the rainbow colours of the gay movement, and she’ll also be waving a rainbow flag.

Russian officials have guaranteed no action will be taken to remove the banner in the arena, but showing it off in the street might be considered a breach of Russia’s 2013 law banning gay “propaganda,” Cunningham, a 56 year-old media trainer, said.

“When you travel abroad you always have to try and respect the local customs,” she said. “For LGBT people, certainly here, it means taking account of attitudes and laws and so I certainly won’t be hoping to break any laws or offend anybody.”

Russian police briefly detained British campaigner Peter Tatchell in Moscow last week after he protested near the Kremlin in support of gay rights.

Gay fans say they feel increasingly comfortable at games in England, where more than 40 clubs have versions of their insignia in the rainbow colours, Cunningham said.

The English Football Association has agreed to a similar version of its official flag after being approached by Cunningham and the Three Lions Pride group she leads.

But it can be a very different story elsewhere.

“The idea of coming to Russia or going to (2022 World Cup host) Qatar and supporting England is really quite difficult for an LGBT-plus fan,” Cunningham said. “I don’t know how many other fans who would be prepared to come.”

In a sign of how international football authorities are trying to crack down on homophobia, FIFA said on Sunday it was looking into reports of alleged offensive chants by Mexico fans during their country’s 1-0 World Cup win against Germany.

Cunningham hopes that bit by bit, attitudes are changing.

She said she made friends with fans from Sweden, Iceland, Australia, Peru and Mexico on her way to Volgograd.

“I cannot believe that those people wouldn’t be able to take messages of solidarity and togetherness back to their countries,” she said. “So all power to the World Cup wherever it’s held. It really does have the power to change things.”