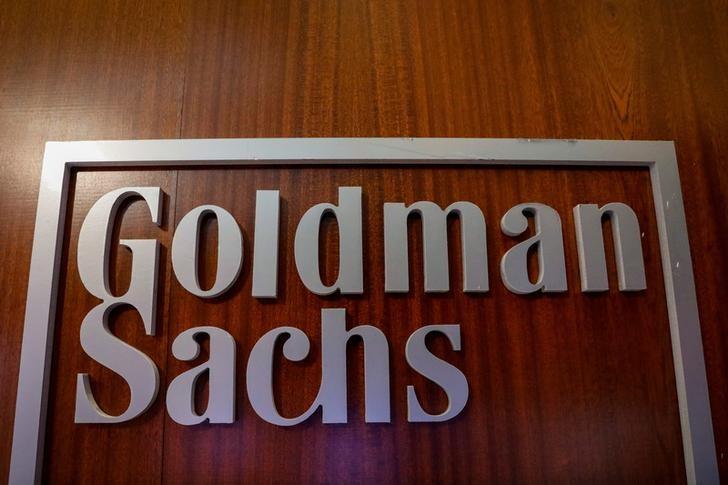 SHANGHAI (Reuters) – Goldman Sachs said it expected China to adopt a slightly easier monetary stance in the face of tit-for-tat tariffs between Beijing and Washington that, while likely to have limited immediate impact on the economy, were at risk of escalating.

FILE PHOTO: The Goldman Sachs company logo is seen in the company’s space on the floor of the New York Stock Exchange, (NYSE) in New York, U.S., April 17, 2018. REUTERS/Brendan McDermid

On Friday, the Trump administration imposed tariffs on $50 billion of imports from China, a move that came on top of hefty duties on steel and aluminum imports implemented at the start of June. China retaliated swiftly by announcing reciprocal tariffs on U.S. products, ranging from soybeans and autos to seafood.

Goldman Sachs analysts forecast that the negative growth impact on China of the tariffs would be 10-20 basis points of gross domestic product (GDP), while the effects on Chinese consumer price index (CPI) inflation would be “modest, on the order of 10-20 basis points”.

Goldman has forecast China’s gross domestic product growth to be 6.6 percent this year. Last week, it said it expected inflation to remain “mild” in coming months after the May CPI number came in unchanged at 1.8 percent year-on-year.

“The tariffs announced thus far should have relatively small macro effects, but there is clearly a risk of further escalation,” its analysts wrote in a note late Sunday.

Goldman also adjusted its forecasts for the reserve requirement ratio in China and the rate on the country’s 7-day reverse repurchase agreements, the tool of choice for the central bank in managing interbank liquidity, reflecting “an expectation of slightly easier policy going forward”, they wrote.

The investment bank lowered its forecast for the 7-day repo rate to 2.75 percent from 3 percent at year-end, and said it expected the People’s Bank of China to cut the reserve requirement ratio by 50 basis points per quarter for the rest of the year.

In April, the PBOC unexpectedly cut the RRR CNCBRR=ECI by 100 basis points to 16 percent for large institutions and 14 percent for smaller banks.

The tariffs are scheduled to take effect in July, leaving some room for discussions to head them off.

But Wang Jun, the Beijing-based chief economist at Zhongyuan Bank, thinks China and the United States have entered a “talk and fight” era in which trade frictions will become normal and the impact will be unavoidable.

“We are likely to see a cold war from economics to other areas,” he said. “We should be ready for sustained conflict and long-term frictions and maneuvering between the two countries.”

The tariffs come at a time when China’s economy is already showing signs of weakness, but while the spat adds to headwinds “they point to a slowdown not a slump”, Mark Williams, chief Asia economist at Capital Economics, wrote in a note.

The impact will be small – even if the U.S. tariffs are tripled, as the Trump administration has threatened – amounting to probably “well under” half a percent of GDP for China.

“And that could be offset by policy loosening,” he wrote.

“Neither side will be brought to its knees – which is one reason to think the trade dispute could drag on.”

Lu Zhengwei, chief economist at Industrial Bank in Shanghai, said the Chinese countermeasures would eventually eat into U.S. jobs, but China would feel little impact from the tariffs against its exports.

Economists have said the impact on the U.S. economy would be muted.

“Chinese exports of products under the new tariffs to the U.S. will be affected but not other overseas markets. China’s market is big enough to support the development of relevant industries. Hence, its impact on the economy is limited,” Lu said.