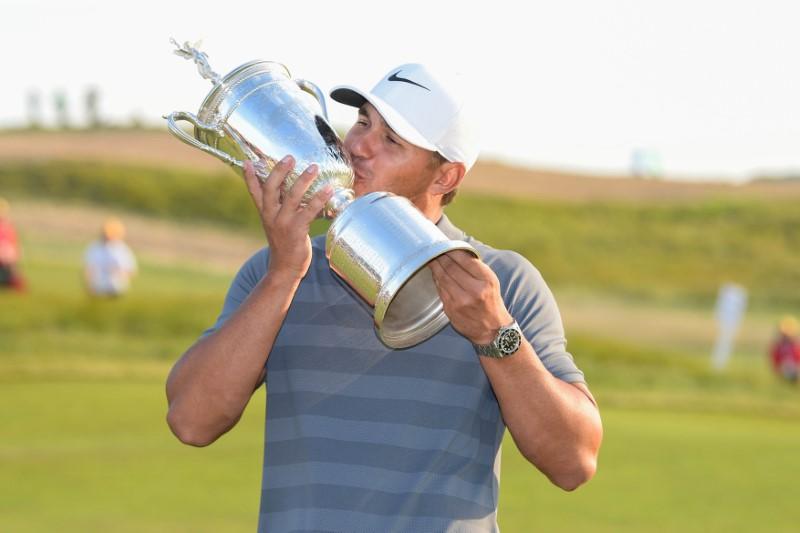 SOUTHAMPTON, N.Y. (Reuters) – American Brooks Koepka putted brilliantly to win the U.S. Open by one stroke at Shinnecock Hills on Sunday, becoming the first player in almost 30 years to successfully defend his title.

England’s Tommy Fleetwood gave him a run for his money with a seven-under-par 63 that matched the lowest score in tournament history, but Koepka’s closing 68 saw him finish top of the leaderboard on one-over 281.

Dustin Johnson was left to ponder another major that got away. After starting the day in a four-way tie for the lead with Koepka, Daniel Berger and Tony Finau, 2016 champion Johnson carded a 70 to finish two shots back in third place.

With the win, Koepka become the first player to win back-to-back U.S. Opens since Curtis Strange in 1988 and 1989.

“I don’t think I could have dreamed of this, going back-to-back,” Koepka said when interviewed by Strange on the 18th green.

“It feels so good to have this thing back.”

The victory comes less than two months after Koepka returned from a left wrist injury, a partially torn tendon that had kept him out of action since January.

The 28-year-old had his work cut out to beat Fleetwood after everyone else stalled in conditions that were more conducive to good scores than on Saturday.

Fleetwood finished before Koepka had even made the turn and the Englishman’s score did not go unnoticed.

“It’s hard not to,” Koepka said. “(I thought) I’d better get going. Hats off to him. That’s some incredible golf.

“I knew if you hit the fairway and hit the green you were going to have some good looks.”

Fleetwood, playing more than two hours ahead of the overnight leaders and starting the day six shots off the pace, had threatened to steal a stunning victory after reeling off four consecutive birdies from the 12th hole.

He had good chances to birdie the final three holes but missed them all, including an uphill eight-footer at the last with history beckoning.

“The putt, I started on the line I wanted to,” he said of missing the chance to become the first player to shoot 62 at a U.S. Open.

“It was a little slower than I thought. I knew what it was for. I hit the putt I wanted. It’s so steep that green.”

As Fleetwood settled in to watch the rest of the round on television, Koepka birdied the 10th hole to take a two-shot lead at even par.

But just as it seemed he had grabbed the championship by the throat he misjudged his tee shot at the par-three 11th and watched his ball rocket over the crowned green and hurtle way beyond into rough.

He did well to salvage bogey, sinking a 12-foot putt to stay ahead.

“I made an incredible four,” Koepka said. “It was something I didn’t think I could do from where I was. I was dead.”

A hot putter kept him in front as he made clutch pars at the next three holes.

Needing only a bogey at the last to win, Koepka hooked his approach so far left it bounced off the base of a grandstand, but he pitched onto the green and lagged his first putt close before tapping in to earn victory.