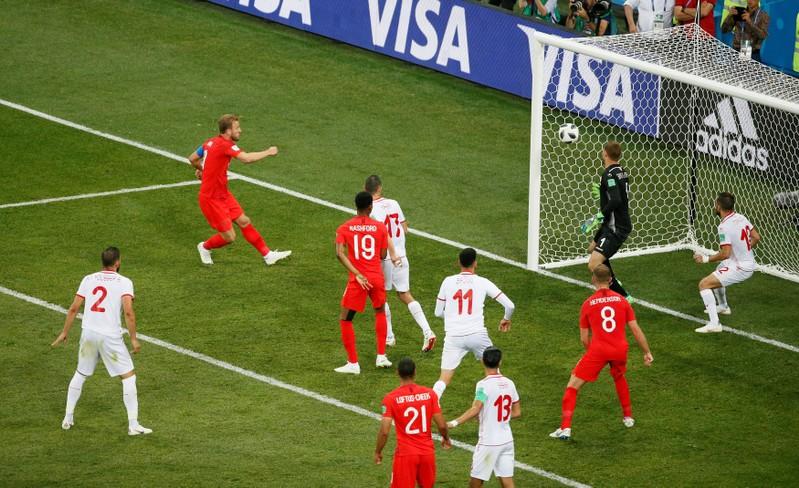 VOLGOGRAD, Russia (Reuters) – England captain Harry Kane declared his arrival on soccer’s biggest stage when he scored twice, including a stoppage-time winner, in a dramatic 2-1 victory over Tunisia as his team launched their World Cup campaign on Monday.

Just when it looked like the ‘Three Lions’ were going to extend their disappointing run in World Cup tournaments, Kane stooped at the far post to head home in the 91st minute.

Mindful of Ronaldo’s hat-trick for Portugal against Spain on Friday and doubles for Spaniard Diego Costa, also in that match, and Belgium’s Romelu Lukaku, Kane is the first England player to score twice in a World Cup game since Gary Lineker in 1990.

Manager Gareth Southgate labeled him a “top, top striker” and said he knew the pressure the Tottenham Hotspur striker was under to deliver having failed to score at Euro 2016.

“For him I am personally delighted but I know the pride he will feel in leading his country to victory tonight will be the biggest for him,” said Southgate.

Tunisia coach Nabil Maaloul said Kane was the difference between the two teams.

“It was him who was always there at the right time. He is the optimal striker,” he said. “The spaces that were created by Kane were very scary to us.”

England had promised to launch their campaign with attacking football and they tore into Tunisia from the start of the Group G game, their red-shirted players buzzing into open spaces.

Tunisia came to Russia with a reputation for being hard to break down. Instead they were opened up repeatedly by England early on, especially on the right flank with Kieran Trippier posing attacking menace with his pace and incisive crosses.

Kane put England deservedly ahead in the 11th minute when Tunisia keeper Mouez Hassen could only palm a strong header by John Stones toward the striker who coolly netted.

But England were otherwise let down by a lack of composure in front of goal on a hot night on the banks of the Volga river, with many players bothered by clouds of gnats.

England paid the price for their wastefulness when the North Africans, who had barely begun to press forward, were awarded a penalty before the break.

Defender Kyle Walker swung an arm behind him, catching Fakhreddine Ben Youssef in the face, and Colombian referee Wilmar Roldan pointed to the spot.

Ferjani Sassi, after appearing to whisper a prayer to himself, scored low to the right of England keeper Jordan Pickford in the 35th minute.

England had penalty claims of their own turned down before struggling to maintain their intensity after halftime. Tunisia looked more comfortable as they sat back in defense, only to be undone by Kane in the 91st minute.

From a Trippier corner, a glancing header from Harry Maguire found the skipper at the back post and Kane cleverly nodded home to give England a winning start.

“At 1-1 we had a plan to… keep probing but not get caught on the counter-attack,” said England manager Gareth Southgate. “At the end the pressure built and built. We did the right things and made good decisions and were good value for the win.”

The result means Belgium top Group G on goal difference after a 3-0 over World Cup debutants Panama earlier on Monday.

England came to Russia determined to put behind them the disappointment of the 2014 World Cup in Brazil when they failed to win a game and went out at the first hurdle. Then came elimination from Euro 2016 at the hands of tiny Iceland.

“It’s massive. I am so proud of the lads. We kept going. We spoke a lot about togetherness and we’ve got a great bond together,” he said.