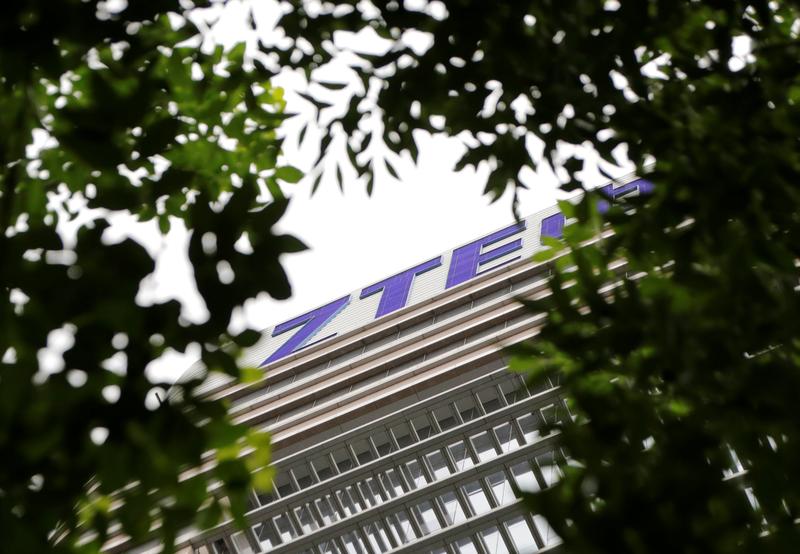 FILE PHOTO: The logo of China’s ZTE Corp is seen on the building of ZTE Beijing research and development center in Beijing, China June 13, 2018. REUTERS/Jason Lee

The Republican-controlled Senate voted 85-10 for the annual National Defense Authorization Act, or NDAA, which authorizes U.S. military spending but is generally used as a vehicle for a broad range of policy matters.

Before it can become law, the bill must be reconciled with one already passed by the House of Representatives. That compromise measure must then be passed by both chambers and signed into law by Trump.

The fiscal 2019 Senate version of the NDAA authorizes $639 billion in base defense spending, for such things as buying weapons, ships and aircraft and paying the troops, with an additional $69 billion to fund ongoing conflicts.

This year, the Senate included an amendment that would kill the Trump administration’s agreement to allow ZTE to resume business with U.S. suppliers. That ZTE provision is not included in the House version of the NDAA.

While strongly supported by some of Trump’s fellow Republicans as well as some Democrats, the measure is opposed by the White House and some of its close Republican allies, who control the House as well as the Senate.

It could face a difficult path to being included in the final NDAA.

That bill is more likely to include a much less stringent provision, included in the House bill, that would bar the Defense Department from dealing with any entity using telecommunications equipment or services from ZTE or another Chinese company, Huawei Technologies HWT.UL.

Republicans and Democrats have expressed national security concerns about ZTE after it broke an agreement to discipline executives who had conspired to evade U.S. sanctions on Iran and North Korea.

The U.S. government placed a ban on ZTE earlier this year, but the Trump administration reached an agreement to lift the ban while it is negotiating broader trade agreements with China and looking to Beijing for support during negotiations to halt North Korea’s nuclear weapons program.

The Senate version of the NDAA also seeks to strengthen the inter-agency Committee on Foreign Investment in the United States, which assesses deals to ensure they do not compromise national security.

The bill would allow CFIUS to expand the deals that can be reviewed, for example making reviews of many proposed transactions mandatory instead of voluntary and allowing CFIUS to review land purchases near sensitive military sites.

Senators included the legislation because of the imprisonment of U.S. pastor Andrew Brunson and the purchase of the S-400 air defense system from Russia.

This year’s Senate bill was named after six-term Senator John McCain, the Armed Services Committee’s Republican chairman and Vietnam War prisoner of war, who has been absent from Washington all year as he undergoes treatment for brain cancer.

Reporting by Patricia Zengerle an Mike Stone; Additional reporting by Diane Bartz; Editing by Chris Sanders and and Peter Cooney