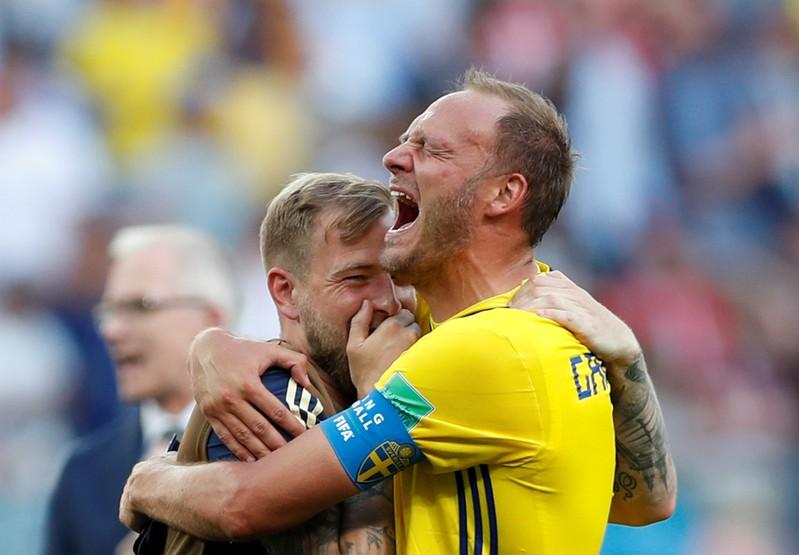 NIZHNY NOVGOROD, Russia (Reuters) – Sweden won an opening World Cup game for the first time since 1958 and ended a worrying goal drought with a 1-0 victory over South Korea in a must-win match if they want to progress from a tricky-looking Group F.

After dominating the game but missing a string of chances, the Swedes won a 65th-minute penalty when Kim Min-woo brought down Viktor Claesson in the box. Salvadoran referee Joel Aguilar initially waved the Swedes away, before being called to consult the Video Assistant Referee system.

In the second VAR-awarded penalty of the World Cup, Sweden’s 33-year-old captain Andreas Granqvist stepped up confidently to sweep the ball low and left of the otherwise impressively in-form goalkeeper Cho Hyun-woo.

“The VAR took a while but we are very pleased they had it … I was pretty sure,” Granqvist said of the wait.

The result brought wild celebrations from the hordes of yellow-clad Swedish fans, fearful their team would draw another blank after failing to score in their last three games.

Sweden had not won an opening World Cup game since 1958, when they were the hosts and eventual runners-up.

The Asians actually began the game brighter, pressing forward and harrying for the first 15 minutes against an initially sluggish-looking Sweden.

But the Scandinavians quickly found their poise, coping comfortably with Korea’s attacks despite the absence of defender Victor Lindelof through illness.

Sweden coach Janne Andersson said the penalty was “crystal-clear”, adding: “We played the match way we had intended, but I’m a little unhappy with the chances we didn’t put away.”

In a game short on finesse, several of Sweden’s best chances fell to Marcus Berg, who had one close-range side-foot shot spectacularly saved by Cho off his knee in the 21st minute.

Forsberg had a go himself early in the second half, but curled over a shot from outside the box.

Korea’s best chances fell to Koo Ja-cheol, who headed just wide in the second half and Hwang Hee-chan who saw his stoppage-time header also just miss as his team launched a late, desperate siege.

But the Swedes held firm and rushed to celebrate with their fans as the Koreans trudged disconsolately off.

Although not the most attractive of the World Cup games so far, there was a terrific atmosphere in the 42,300-strong crowd at the blue-and-white Nizhny Novgorod stadium next to a cathedral at the confluence of the Volga and Oka rivers.

The Swedes, many in their now de rigueur Viking helmets, easily outnumbered and out-sang their red-clad rivals in the avant-garde, sun-kissed dome that is meant to evoke wind and water.

Sweden next face world champions Germany, where they can ill afford to miss chances like they did on Monday. “If we win against Germany, we are through. The pressure is on them now,” added the ebullient Granqvist.

Korea next face in-form Mexico who shocked the Germans in their Group F opener. Few will be giving a chance to Korea, who have now only won one of their last 10 World Cup games.