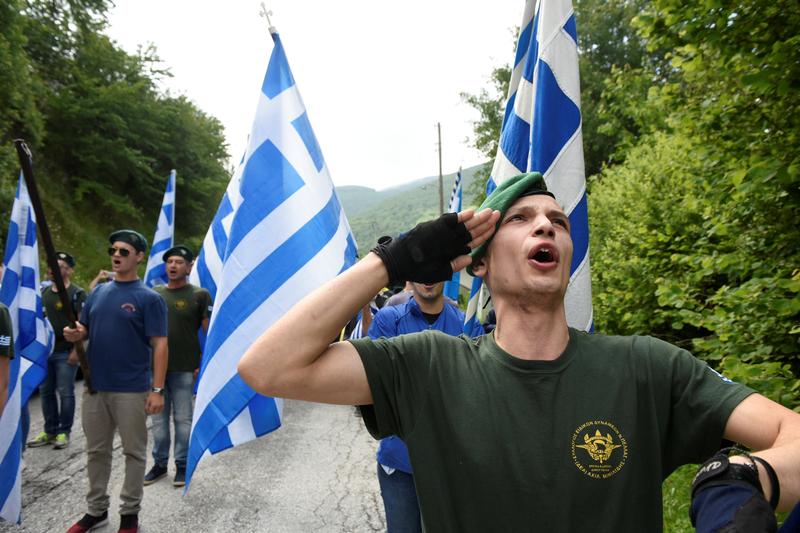 ATHENS (Reuters) – With a brief formulation of words, Greek Prime Minister Alexis Tsipras may have boosted his chances of persuading foreign creditors to free his nation from years of financial humiliation on better terms than a few days ago.

FILE PHOTO: Protesters chant the Greek national anthem during a demonstration against the agreement reached by Greece and Macedonia to resolve a dispute over the former Yugoslav republic’s name, in Pisoderi village, northern Greece, June 17, 2018. REUTERS/Alexandros Avramidis/File Photo

Tsipras agreed a deal with his Macedonian counterpart at the weekend under which Greece’s neighbor will be renamed “Republic of North Macedonia”, a formulation offering a chance to end a 27-year dispute with Skopje that has bedeviled the European Union’s eastward expansion.

Now the hope is that the political goodwill will earn Athens a warmer-than-usual reception when euro zone finance ministers meet in the Eurogroup on Thursday to plot Greece’s steps toward exiting its bailout program, Greek and EU officials said.

That includes possible relief on the country’s debts, which have soared since the first EU/IMF rescue in 2010.

Tsipras acknowledges that the Macedonia deal, which opens the way for the former Yugoslav republic to seek EU and NATO membership, is separate from any Greek debt relief.

“I feel like a chess player who is simultaneously playing two games, because you know at the same time (there are) the name issue negotiations and crucial negotiations for the debt issue,” he told the head of the euro zone bailout fund last week after the Macedonia talks achieved a breakthrough.

But he added: “I’m hoping, as we had a breakthrough yesterday, we will have the same next week in maybe the most crucial for the country after eight difficult years.”

Tsipras has often had testy relations with the EU as austerity measures imposed under the bailouts hurt Greeks badly.

But an EU official expressed cautious optimism that the Macedonian settlement, which must be approved by both countries’ parliaments, will have a positive psychological effect.

“I think the deal will help (Greece) in debt relief talks. The government will head to the talks with a different morale,” the official said on condition of anonymity, while adding that the deal had never been linked to bailout talks.

FILE PHOTO: Greek Prime Minister Alexis Tsipras and Macedonian Prime Minister Zoran Zaev gesture before the signing of an accord to settle a long dispute over the former Yugoslav republic’s name in the village of Psarades, in Prespes, Greece, June 17, 2018. REUTERS/Alkis Konstantinidis/File Photo

The deal was warmly welcomed in the EU and by the United States, long impatient with what it perceives as Greek obduracy over the name, potentially destabilizing the Balkans.

“One cannot rule out that it will have a positive impact, since Greece appears to be a force that solves instead of creating problems,” a Greek government official said, dismissing any suggestion that debt relief is dependent on the Macedonian settlement. “It was never demanded by European lenders, there was never a trade-off.”

Another person who has participated in past bailout talks sounded a note of caution as the German government, whose support is vital for any debt deal, is unlikely to be more generous as it is currently preoccupied by an internal row over migrant policy.

The Macedonia deal has led to fiery protests in both countries and unrest in Tsipras’s left-right coalition, which has a fragile parliamentary majority and is trailing the conservative opposition in opinion polls.

It survived a confidence vote on Saturday night but lost one lawmaker from the right-wing Independent Greeks party, Tsipras’s junior ally, which has vowed to back the coalition but rejects any settlement that includes the name Macedonia.

On Monday, Dimitris Kammenos, who was expelled from the Independent Greeks after backing the no-confidence motion against the government, insisted the deal was indeed a quid pro quo.

He said a group of right-wing lawmakers had been dissuaded from submitting a censure motion against Greece’s foreign minister who signed the accord on Sunday.

“There were arguments related to the economy,” Kammenos told Skai TV. “Whether Greece would get the debt deal was subject to whether it would give the name Macedonia,” he said.

His comments have frequently caused public uproar on social media and angry responses from politicians. The Independent Greeks dismissed his comments.

“There was never reciprocity between the process for a deal over Skopje’s name and negotiations on financial issues within the framework of the EU,” said Independent Greeks’ spokesman Theodoros Tosounidis. “He (Kammenos) is obviously trying to link things to cover up his actions.”