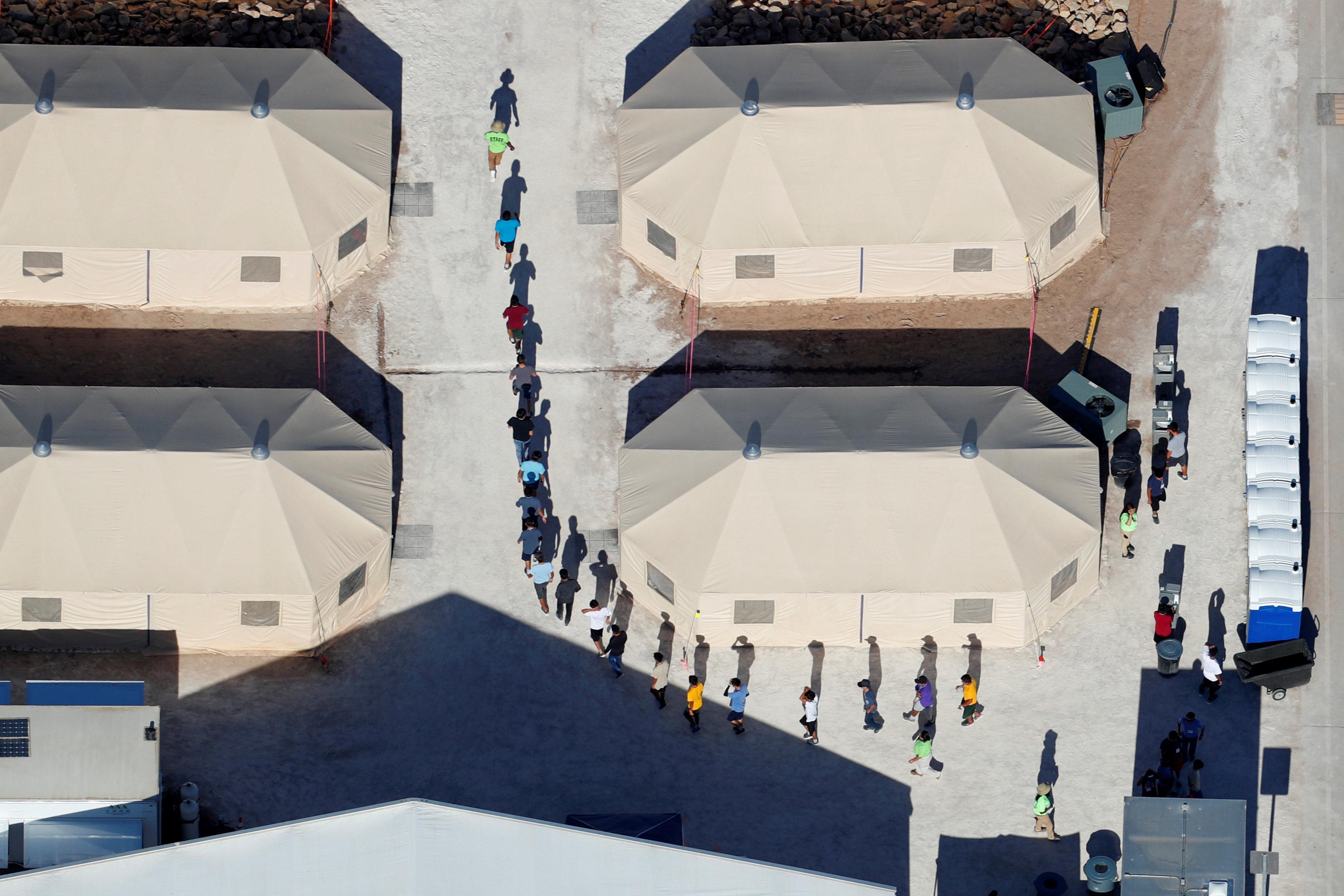 The family separations and detentions of children at the southern U.S. border, highlighted by the videos of youngsters in cages and an audiotape of wailing children, have sparked an outcry at home and strong condemnation abroad.

Trump, who has made a tough stance on immigration a centerpiece of his presidency, has staunchly defended his administration’s actions. He has cast blame for the separations on Democrats, although his fellow Republicans control both chambers in Congress and his own administration implemented the current policy of strict adherence to immigration laws.

On Tuesday the president again tried to blame Democrats for what he called “loopholes” in the law that require families detained for entering the country illegally either to be separated or released.

The president has sought to link an end to the family separations to passage of a wider bill on immigration, prompting Democrats to accuse him of using children as hostages.

The separations – nearly 2,000 children were separated from their parents between mid-April and the end of May – have been blasted by Democrats, some Republicans, medical professionals, rights activists and clergy.

They began after Attorney General Jeff Sessions announced in April that all immigrants apprehended while crossing the U.S.-Mexico border illegally should be criminally prosecuted.

A Reuters/Ipsos national opinion poll released on Tuesday showed fewer than one in three American adults support the policy. The June 16-19 poll found that 28 percent of people polled supported the policy, while 57 percent opposed it and the remaining 15 percent said they do not know.

The images that have sparked widespread condemnation, of children in wire cages, are of a border patrol processing center in McAllen, Texas.

Three Republican senators – Ron Johnson, Ted Cruz and John Kennedy – called on Trump on Tuesday to allow families to stay together if they have crossed the border illegally, while lawmakers pursue legislation on wider immigration reform.

Cruz, who ran against Trump in the 2016 Republican presidential primaries, plans to introduce a bill this week that would prohibit the separations along with other reforms.

“What I would do until we pass Ted’s bill is to continue to arrest and prosecute people for breaking the law, but allow their children to stay with them,” Kennedy said at a news conference with Johnson and Cruz.

Trump planned to meet with Republican lawmakers later on Tuesday before votes expected this week on immigration legislation. He is focused on winning congressional funding for a wall he has long wanted to build along America’s southern border with Mexico, and Democrats have long said they will resist that.

One House bill would limit, but not fully prohibit family separations, fund Trump’s wall and give legal protections to young adults, known as “Dreamers,” who were brought to the country as children when their parents entered the country illegally. Details were still in flux.

The bill is opposed by Democrats, who object to another provision that would cut legal immigration levels, and by conservative Republicans who are backing a rival bill that takes a harder line on immigration.

In the Senate, Cruz said his bill would build temporary shelters where immigrant families could stay together in cases where there was no threat to the children’s safety, double the number of federal immigration judges and speed handling of asylum applications.

Decrying “internment camps,” Democrats and their supporters disrupted a high-profile U.S. congressional hearing about an FBI probe on Tuesday.

With the sound of a young child crying in the background, the top Democrat on the House of Representatives Judiciary Committee, Jerrold Nadler, broke from traditional protocol and started reading from a statement, saying “these (migrant) children are not animals.” His Republican colleagues tried to shout over him “Out of order!”

On Tuesday, the attorneys general of 21 states called on Sessions in a letter to stop endangering children by separating them from their families.

In the latest condemnation from abroad, the U.N. refugee agency has told Washington it is very concerned over the family separations, U.N. High Commissioner for Refugees Filippo Grandi told Reuters.