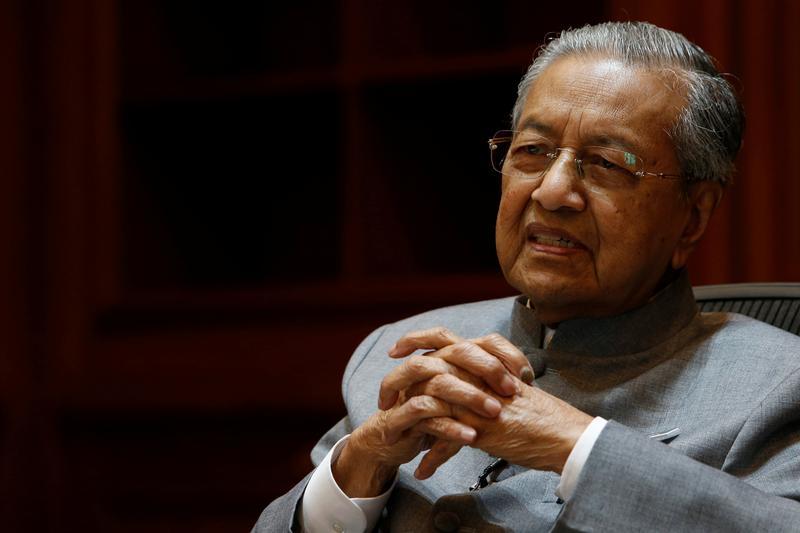 KUALA LUMPUR (Reuters) – Embezzlement and bribery with government money are among the charges that Malaysia is looking to bring against former prime minister Najib Razak following a probe into funds allegedly looted from the state-run fund 1MDB, Prime Minister Mahathir Mohamad said on Tuesday.

Mahathir told Reuters in an interview that Malaysian investigators already “have an almost perfect case” against the principal suspects who had defrauded 1Malaysia Development Berhad (1MDB) and misappropriated billions of dollars in public funds.

He also described Najib, who had founded 1MDB, as playing a central role.

“He was totally responsible for 1MDB. Nothing can be done without his signature, and we have his signature on all the deals entered into by 1MDB. Therefore, he is responsible,” Mahathir said.

Having retired as prime minister in 2003 after 22 years in power, Mahathir – who is aged 92 – came out of retirement and joined the opposition to topple Najib in an election last month.

Following his stunning victory, Mahathir has reopened investigations into 1MDB and Najib’s involvement in its operations.

As a result of an anti-kleptocracy probe, the U.S. Department of Justice has alleged more than $4.5 billion was misappropriated from 1MDB and that about $700 million of that ended up in Najib’s personal bank accounts.

Mahathir has barred Najib from leaving Malaysia, and police have searched properties linked to him, while anti-graft investigators have questioned both Najib and his wife, Rosmah Mansor.

Najib has consistently denied any wrongdoing, and repeated last week that he did not take money from 1MDB.

Najib’s spokesman could not immediately be reached for comment on Tuesday.

Investigators are looking to bring “a number of charges” against Najib, Mahathir said, adding those charges would be based on abuse of power when he was prime minister.

Mahathir said Rosmah was also being investigated in connection with 1MDB.

“Some of the money is believed to have gone to her, lots of money,” Mahathir said. “We know about this, but finding the paper trail is a bit more difficult in this case because she doesn’t sign any papers. Najib signs a lot of papers.”

Mahathir said he expected Malaysia to make its first arrest in the 1MDB case within months and “hopefully” start a trial by the end of the year.

“We are working as hard as possible at a furious pace. We think that we already have almost a perfect case,” Mahathir said.

Asked to name the targets of that case, he said, “Against Najib, against Jho Low and a few others.”

Low is a Malaysian financier, who is also seen as a central figure in the 1MDB scandal. He is regarded as close to Najib and his family.

Low’s lawyer could not be immediately reached for comment.

“When we go to the courts, we will have clear evidence of the wrongdoing. We cannot afford to lose,” said Mahathir.

Reporting by A. Ananthalakshmi, Kevin Krolicki and Emily Chow; Editing by Simon Cameron-Moore and Martin Howell