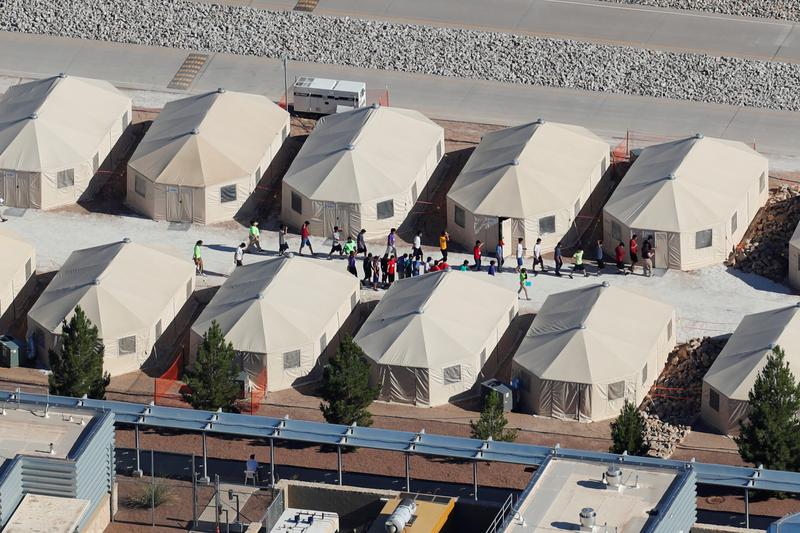 SAN SALVADOR (Reuters) – Honduras called on Monday for the United States to stop separating immigrant children from their parents at the U.S. border, while El Salvador warned that the policy puts children’s health at risk and could cause psychosocial scars.

Immigrant children, many of whom have been separated from their parents under a new “zero tolerance” policy by the Trump administration, are shown walking in single file between tents in their compound next to the Mexican border in Tornillo, Texas, U.S. June 18, 2018. REUTERS/Mike Blake

El Salvador’s foreign ministry said in a statement that the Trump administration’s hardline policy of separating immigrant parents and children violated human rights and “strongly urged” for an end to the practice.

“These provisions are mainly affecting migrant children and adolescents … exposing them to extremely adverse conditions, which will surely have consequences in their physical health and long-term psychosocial development,” the statement said.

The administration of U.S. President Donald Trump has responded to an increase in immigration from Central America with a “zero tolerance” migration policy that provides for the arrest of all adults caught trying to enter the United States illegally, including those seeking asylum.

Images of children and youths sitting in concrete-floored cages in U.S. detention centers have fanned outrage over the policy. Trump administration officials have defended the policy as a way to secure the border and deter illegal immigrants.

Official figures indicate that from mid-April to May, U.S. authorities have divided more than 2,000 children from their families. Many are from Central America, where immigrants are fleeing poverty and widespread gang violence.

Immigrant children, many of whom have been separated from their parents under a new “zero tolerance” policy by the Trump administration, walk in single file between tents in their compound next to the Mexican border in Tornillo, Texas, U.S. June 18, 2018. REUTERS/Mike Blake

El Salvador insisted parents had the right to know where their children were and asked that consular officials be “speedily” notified of where the children have been taken.

Honduran President Juan Orlando Hernandez on Monday also called for an end to the family separations after meeting with U.S. Secretary of State Mike Pompeo, echoing the call that children’s rights should come first.

“We can also see how many leaders, from both parties in Congress … have also emphasized that this should not continue,” he said, calling on U.S. lawmakers to take action.

U.S. Democrats blasted conditions in detention centers while the Republican-controlled U.S. House of Representatives moved toward voting later this week on two pieces of immigration-related legislation.

For its part, the government of Guatemala, which has tried to show support for Trump and backed his decision to move the U.S. embassy in Israel to Jerusalem, refrained from criticism.