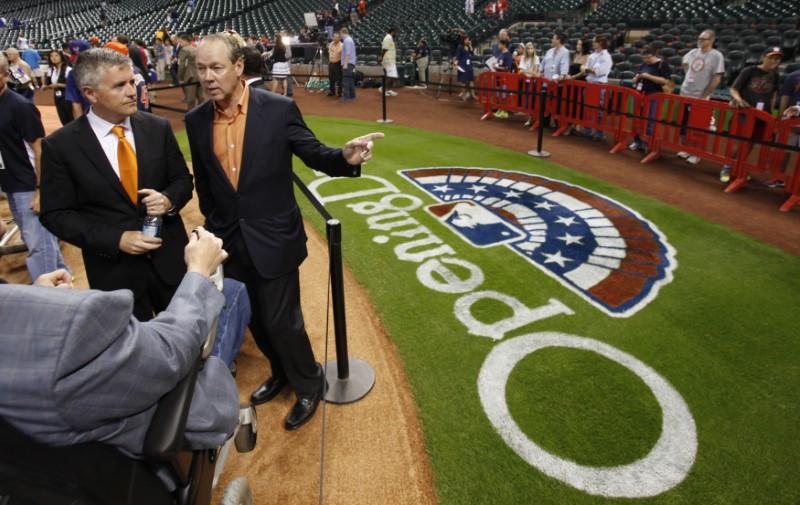 Houston Astros general manager Jeff Luhnow was promoted to president of baseball operations and given a contract extension on Monday, some eight months after the Astros claimed the franchise’s first World Series title by defeating the Los Angeles Dodgers.

“This is very well-deserved,” Crane commented. “Jeff has done an outstanding job in delivering on the vision that he outlined for us when we hired him several years ago. He was the architect for the Astros first World Series championship, which was a historic achievement, not only for our franchise but for the entire city. Jeff’s vision also included putting the Astros in position to compete for multiple championships.”

—Cleveland right-hander Carlos Carrasco didn’t suffer any structural damage in his injured right elbow when he was hit by a hard line drive in Saturday’s game against the Twins, Indians manager Terry Francona told reporters.

There were fears he might have broken a bone in the elbow, but an MRI exam displayed that he suffered only a deep bruise. Carrasco, who went on the 10-day disabled list on Sunday, is 8-5 with a 4.24 ERA this season.

Francona said Carrasco will undergo treatment for three days and will be re-evaluated on Wednesday. After the swelling subsides, Francona said doctors will work on strength and range of the motion in the elbow joint.

—Cubs infielder Javy Baez, who was hit on the left elbow by a pitch on Sunday against the St. Louis Cardinals and was slated to miss Monday’s series opener against the Los Angeles Dodgers, hopes to return for Tuesday’s game against the Dodgers.

Baez, who leads the team with 14 home runs, was plunked by St. Louis Cardinals right-hander Jack Flaherty in the third inning on Sunday. He was sporting a bruise a day later, but didn’t need to undergo X-rays.

“I’m fine,” Baez said. “It’s just really sore. It got me really good right on the elbow. I thought the pain was going to go away right away, but it kind of numbed my whole arm and even my ribs. We’ve been icing it. It feels pretty sore, but I know I’m good.”

—Chicago Cubs left-hander Mike Montgomery will make the start Tuesday for the Chicago Cubs as Yu Darvish inches closer to returning to the rotation.

Sidelined since May 26 with inflammation in his right triceps, Darvish has thrown two bullpen sessions without a setback. He’s scheduled to throw a simulated game at Wrigley Field on Tuesday prior to the second game of the Cubs’ series with the Los Angeles Dodgers. Montgomery will make his fifth start of the season on the same day.

Darvish might not be ready to return this week. The longer his absence stretches, the more likely it becomes the Cubs could look to add a starter, but the collective view from the team’s management is roster needs will be more apparent next month.

—Texas Rangers shortstop Elvis Andrus was activated from the disabled list after missing more than two months with a broken right elbow. The two-time All-Star was in the starting lineup against the Kansas City Royals.

Andrus is batting .327 with two homers and five RBIs in 14 games this season. He suffered the broken elbow on April 11 when he was struck by a pitch from Keynan Middleton of the Los Angeles Angels.

—The Cleveland Indians activated first baseman Yonder Alonso from the family medical emergency list and signed left-hander Marc Rzepczynski to a minor league contract, the team announced prior to their game against the Chicago White Sox.

Alonso missed three games after being placed on the emergency list Friday for undisclosed reasons. He is batting .248 with 11 homers and 37 RBIs in 65 games. Rzepczynski, 32, was recently designated for assignment by the Seattle Mariners and later released. He had a 9.39 ERA and 2.87 WHIP in 18 appearances with Seattle, and the Indians assigned him to Columbus.

—The Philadelphia Phillies demoted Opening Day closer Hector Neris to Triple-A Lehigh Valley. The Phillies promoted left-hander Austin Davis, who is 0-1 with a 2.43 ERA in 22 Triple-A appearances, to fill the spot on their 25-man roster.

Neris is 1-3 with a 6.00 ERA and 10 saves in 13 opportunities in 30 games this season. Neris, who saved 27 games last season, converted six of his first seven chances. He blew two saves over his next four games before losing the ninth-inning role.

He has since received two save opportunities, converting one on Saturday against the Milwaukee Brewers for his first save in nearly a month, but serving up two homers on Sunday and allowing four runs while recording just two outs as the Phillies’ ninth-inning lead dwindled from five to one before he was removed.

—The San Francisco Giants officially moved shortstop Brandon Crawford to the paternity list and called up Kelby Tomlinson from Triple-A Sacramento to replace him against the Miami Marlins.

The move was expected — Crawford’s wife, Jalynne, is due to give birth to the couple’s fourth child — but a replacement had not been previously announced. That will now be Tomlinson, who was optioned down to the minors on June 1.

Duensing, who announced on Twitter that his grandfather died, will miss at least three days and can miss up to seven if necessary. He is 2-0 with a 4.50 ERA in 31 appearances this season.

Zastryzny is with the Cubs for the second time this season. He spent one day with the club — May 8 — and tossed two scoreless innings of relief against the Miami Marlins. Overall, he is 1-0 with a 4.06 ERA in 13 major league appearances (one start).

—The Los Angeles Angels activated outfielder Kole Calhoun off the 10-day disabled list prior to their game against the Arizona Diamondbacks.

Calhoun has been sidelined since injuring his oblique on May 31. He was placed on the disabled list two days later. The Angels sent outfielder Jabari Blash to Triple-A Salt Lake in a corresponding move.

The 30-year-old Calhoun, who smacked at least 17 homers in each of the past four seasons, including a career-best 26 in 2015, was enduring the worst campaign of his five seasons as a starter prior to being hurt. He is batting just .145 with one homer and 11 RBIs.

—The Atlanta Braves strengthened their hold on numerous starting spots in the latest National League balloting update for the All-Star Game, to be played in Washington, D.C., on July 17.

There were no changes in terms of projected starters from the first ballot update last week, though Atlanta’s Nick Markakis overtook Washington’s Bryce Harper as the top vote-getting outfielder. The Dodgers’ Matt Kemp remains third among outfielders in voting, with nearly a quarter-million more votes than the Rockies’ Charlie Blackmon for the final outfield starting spot.