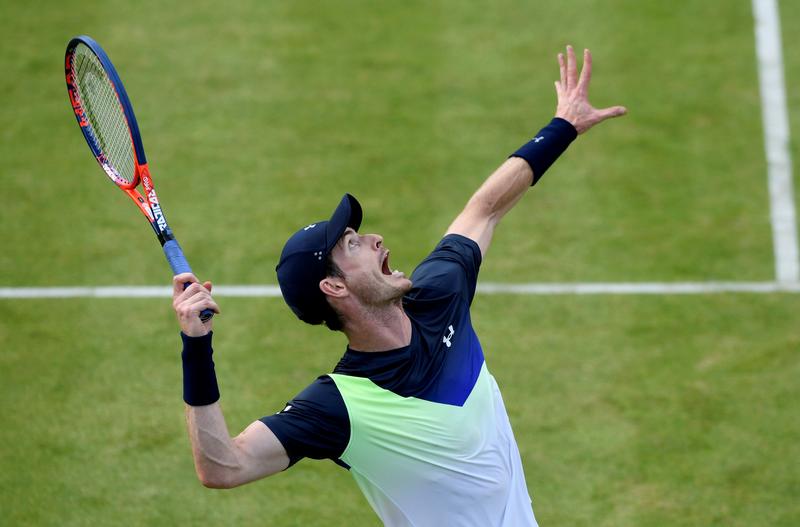 LONDON (Reuters) – Andy Murray was back at one of his favorite stomping grounds on Tuesday and while the resumption of his career ended in defeat by Nick Kyrgios, the Scot remained upbeat about his return from injury, if guarded about his Wimbledon participation.

The 31-year-old three-times Grand Slam champion had not played a competitive match since losing to Sam Querrey in last year’s Wimbledon quarter-finals and opted to have right hip surgery five months ago.

His ranking has slipped to 156 but there were times during a compelling two hour 39 minute clash with Kyrgios in the first round of the Queen’s Club championships when it looked as though he had never been away.

Ultimately, however, he could not last the pace and Kyrgios buckled down after a torrid first set to win 2-6 7-6(4) 7-5.

He was clearly fatigued at the end and there was even the suggestion of a limp but Murray said that was only to be expected after such a long layoff.

“I’m a bit stiff just now. Just normal stuff that you would get after maybe playing on a grasscourt for the first time in a while,” Murray told reporters.

“The longest I have practiced in the last year has been an hour and a half. I was on the court for significantly longer than that in a more intense environment. So, you know, I’m feeling decent, considering that.”

Questions quickly turned to Wimbledon which starts in less than two weeks. Murray would not say how he will prepare, or whether he would even take part.

Going straight into best-of-five set tennis with such little playing time would be difficult and Murray hinted he play at next week’s Eastbourne event. Then again, he also raised the prospect of opting to miss Wimbledon altogether, depending on how his body reacts in the next few days.

“I won’t rule anything out just now. I won’t rule out playing Eastbourne and not playing Wimbledon,” Murray, given a standing ovation when he arrived on court, said.

“I wouldn’t rule out not playing a tournament next week and trying to get matches like in an exhibition tournament, as well, to get ready for Wimbledon.

“I’m not sure yet. I’m really happy that I got on the match court today and played. It was a close decision. I have not been practicing loads at all.”

He continued: “I really haven’t played a whole lot of tennis, so I’m happy I got out there and competed and performed respectably.

“It’s something I need to speak to my team about. If I wake up and I really don’t feel good tomorrow, then that’s obviously not a great sign for best-of-five-set tennis.”

Kyrgios, who has also had hip and elbow injuries, had lost all five previous meetings with Murray and a sixth loss beckoned as he dropped serve three times, each time with a wild double-fault, in a shambolic first set.

Once he stopped the tippy-tappy tennis and showboating started crunching 140mph serves and thunderous groundstrokes, he began to give Murray a real examination.

Murray saved two match points at 4-5 in the decider but at 5-6 he double-faulted to hand Kyrgios the win.

The Australian, a close friend of Murray’s, said it had been a difficult engagement.

“It was a very awkward match for me because I was thinking the guy hadn’t played a match in a year, and I was getting smoked in the first set,” he said. “I was, like, this is not going to be a good look if I lose this match.”