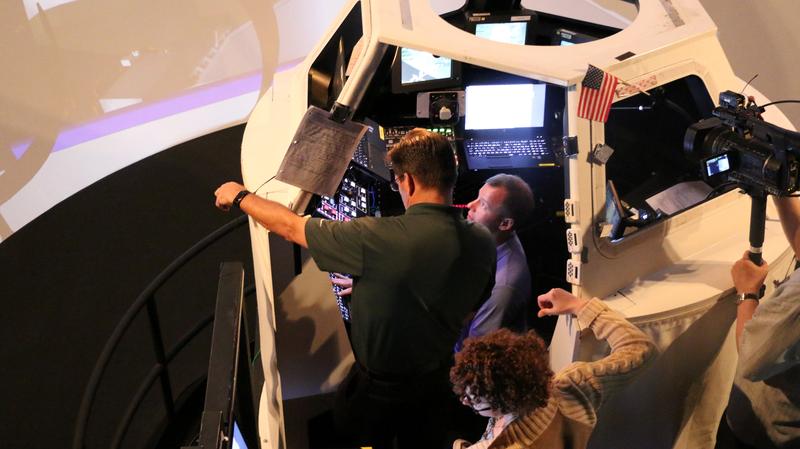 HOUSTON (Reuters) – As a boy growing up in Kansas, Nick Hague looked up at the stars and wanted to explore the unknown. In October, his dream will come true when he blasts off on a Russian Soyuz spacecraft to the International Space Station.

NASA Astronaut Nick Hague kneels down in the Cupola during Robotic Arms training, in preparation for his upcoming mission to space this fall aboard the International Space Center, at Johnson Space Center in Houston, Texas, U.S., May 14, 2018. Picture taken on May 14, 2018. REUTERS/Ruthy Munoz

Before rocketing into space from Kazakhstan on Expedition 57 for his six-month tour, the 42-year-old father has undergone extensive training in everything from spacewalks to robotics to Russian and the psychology of sharing small spaces.

Preparation was “a 2-1/2-year mission on the home front,” Hague said from inside a replica of the space station at the National Aeronautics and Space Administration’s Johnson Space Center in Houston.

An engineer and colonel in the U.S. Air Force, Hague was one of eight selected in 2013 for NASA’s astronaut candidate training program. He is one of 42 active astronauts eligible for a flight assignment.

Hague said he found his love of space early: “Growing up as a little boy, staring up the night sky and wanting to just explore the unknown and figure out what’s out there and go find new things.”

NASA Astronaut Nick Hague, a Flight Engineer, reviews a computer model during his Robotics training in the Systems Engineering Simulator in preparation for his upcoming mission Expedition 57/58 to space this fall aboard the International Space Center, at Johnson Space Center in Houston, Texas, U.S., May 14, 2018. Picture taken on May 14, 2018. REUTERS/Ruthy Munoz

In the Air Force, Hague worked as an engineer on satellites and aircraft. Then he attended test pilot school at Edwards Air Force Base, and realized his dream might be within reach.

Training was intense. After receiving instructions on how to use equipment during a spacewalk, Hague once donned his space suit for 6-1/2 hours of underwater simulation at the neutral buoyancy laboratory in Houston, which mimics zero gravity in space using a 40-foot deep pool.

“I have practiced a bunch of different skills … whatever they need me to do when I go outside and do a spacewalk,” he said.

In addition to Houston, Hague has trained with NASA’s partners in Russia, Japan and Europe. He said the long periods of separation from his wife, who is also in the U.S. Air Force, and two young boys is one of the most challenging parts of the job.

While his sons appreciate the “neat” work their father is doing, Hague said he remains “just dorky dad” at home.

Hague said he looks forward to being the eyes and ears of scientists back on earth. He will work with Russian cosmonauts to monitor shifts in bodily fluids that occur in space. Some astronauts have returned from space missions with changes in eyesight.

Scientists said they hope to learn if there is a correlation between fluid shifts and vision. Such issues need to be better understood before humans are sent on longer space flights into deep space.

Just as important as studying the science of the mission, Hague said, is understanding the psychology involved in a space station almost the size of a football field with six sleeping quarters, two bathrooms and a gym.

Astronauts must learn to work in a team, resolve personal conflicts and do even small things like minding their personal items in what Hague called “that flying test bed” so they do not clutter others’ work spaces.

“It’s nerve wracking. All the emotions that are going to be kind of coursing through me,” he said. “You’re leaving family for an extended period of time, so it can be stressful.”

On the plus side: “You’re getting to fulfill a childhood dream.”