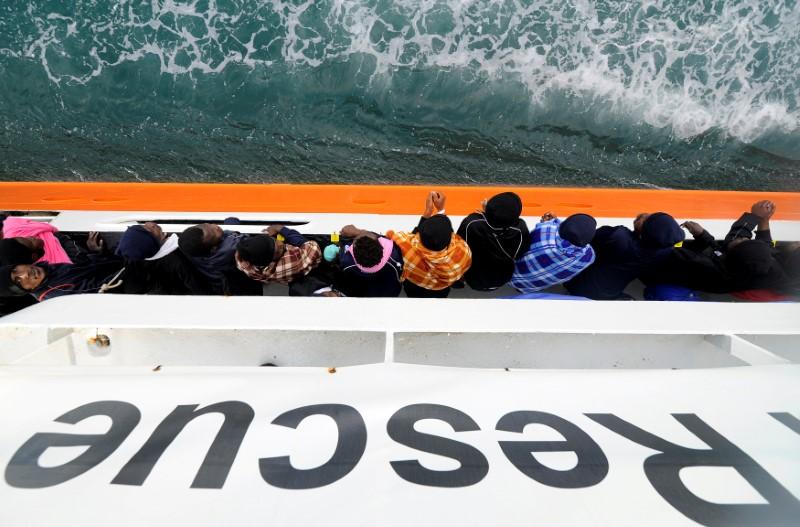 BRUSSELS (Reuters) – German Chancellor Angela Merkel will try on Sunday to persuade other EU leaders to further curb immigration and restrict movement of asylum seekers within the European Union, to help keep her ruling coalition from crumbling at home.

Migrants wait to disembark from Aquarius in the Sicilian harbour of Catania, Italy, May 27, 2018. REUTERS/Guglielmo Mangiapane

All 28 European states are unlikely to fulfill at their June 28-29 meeting the demand of Merkel’s coalition partner for a bloc-wide plan to spread the burden of hosting asylum seakers more widely across the EU.

Merkel hence pushed for an emergency meeting this Sunday with leaders from nine other countries – including the major arrival states Italy and Greece, as well as France, Austria, Bulgaria, the Netherlands and others.

Poland, the Czech Republic and Hungary, which have refused to back plans to share out asylum seekers more evenly, will not attend Sunday’s meeting. But Merkel is hoping a commitment by the states that do attend to do more to limit travel by asylum seekers within the bloc will help placate her coalition partners, the Christian Social Union (CSU).

“We see a strong need to significantly reduce secondary movements… by preventing unlawful crossing of internal borders between Member States by irregular migrants and asylum seekers and by ensuring swift readmissions by the competent Member State,” said a draft of the statement for Sunday’s meeting.

Asylum seekers already do not have the right to travel freely within the EU while their applications are being processed. But such “secondary movements” are difficult to stop in the border-free Schengen zone, and have been widespread since immigration to Europe peaked in 2015, when more than a million people arrived from the Middle East and Africa.

Immigration figures are now much lower, with only 41,000 sea arrivals so far this year, according to U.N. data. A sea route to Greece used by hundreds of thousands in 2015 was shut in 2016 by an agreement between the EU and Turkey, and the other main route across the Mediterranean from Libya to Italy has also tapered as Libyan factions cracked down on people-smuggling.

But Merkel is still under new pressure to obtain more commitments from other states. Her coalition partner, the Christian Social Union (CSU) from the southern Gerrman state of Bavaria, has said it would bar from Germany all asylum-seekers registered in other EU states unless a summit of all EU leaders on June 28-29 agrees a bloc-wide deal to share them out evenly.

Merkel’s stand-off with the CSU party leader, Germany’s Interior Minister Horst Seehofer, has threatened the stability of her government. It has also brought back the issue of migration to the top of the EU’s political agenda.

While an agreement on relocating refugees and migrants arriving in Italy and Greece to other EU states evenly is as far away as ever, the EU is now trying to shift attention to areas where all member states agree.

That means the summit is set to produce even more promises of tightening the bloc’s external borders and cooperating closely with countries from Turkey and Jordan to Libya and Niger on preventing refugees and migrants from ever reaching Europe.

In addition to calling for more efforts to combat secondary movements, the summit draft statement proposes looking into “regional disembarkation platforms” outside of the EU where asylum requests could be assessed before claimants reach Europe.

Sources said Germany would want the Sunday meeting to produce a commitment from states like Greece and Italy to take back asylum-seekers who make it to Germany.

“Merkel needs to do this to help Seehofer climb down from a tree,” one senior EU diplomat said.

But Italy, where a new government includes the anti-immigrant League, made clear it was not willing to play along.

“In the last four years, Italy has taken in 650,000 boat migrants and received 450,000 requests for asylum. So instead of taking, we are willing to give,” said Italian Interior Minister Matteo Salvini, the League leader.

The results of the looming EU summit are likely to make getting to Europe and winning asylum even harder in the future, which rights groups have long decried as turning the continent into a “fortress” shut from less-privileged parts of the world.

On Wednesday, which marks the World Refugee Day, the Organization for Economic Co-operation and Development said asylum applications to EU states nearly halved last year from 2016.

Europe’s quickening migration diplomacy coincides with an international outcry over the U.S. administration’s policy of separating migrant families at the Mexican border.

Pope Francis told Reuters in an interview that populists were “creating psychosis” on the issue of immigration, even as ageing societies like Europe faced “a great demographic winter” and needed more immigrants.

Without immigration, Europe “will become empty”, he said.

Meanwhile, the summer peak season for migrants sailing in small boats from north Africa to Europe’s southern shores is under way. The Italian Coast Guard ship Diciotti arrived at the Sicilian port of Pozzallo overnight with 519 migrants on board, relief workers said. They were saved in seven rescue operations off the Libyan coast, and some spent days at sea as a new Italian government looks to slow the influx.