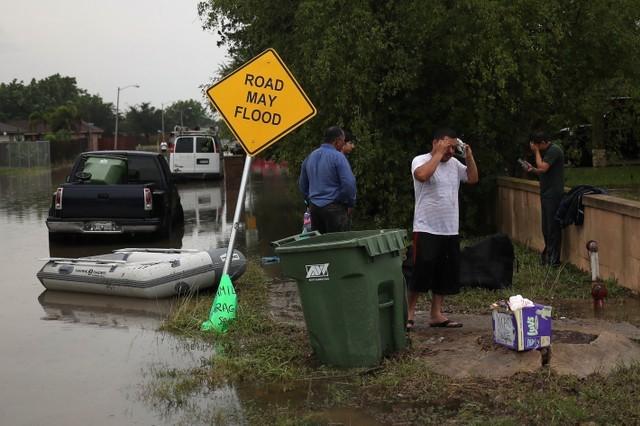 Residents waded shoulder deep through flood waters running down their streets in Mercedes, Texas, about 5 miles (8 km) north of the Mexico-U.S. border, while water was rising in nearby Weslaco.

“My house is to the ankles,” tweeted a Weslaco resident named Sam, showing video of floodwater in his kitchen and other rooms.

Around 15 miles (24 km) to the west, roads collapsed in McAllen as they transformed into torrents.

McAllen was already in the news this week for images of migrant children held in cages at a Border Patrol Processing Center in the city.

Some 121 miles northeast on the Texas Gulf coast, a flash flood watch was in effect for towns around Corpus Christi after more than a foot of rain had fallen, the National Weather Service said. Emergency services conducted several high-water rescues in the city while police closed roadways, local media reported.

Between 6 and 14 inches (15 to 36 cm) of rain have fallen on areas of South Texas this week and more rainfall was possible through early Thursday, the weather service said.

Heavy rainfall was also expected to the north with up to 5 inches (13 cm) forecast for the Middle Mississippi Valley states of South Dakota, Nebraska, Iowa and Kansas throughout the day and into Thursday, the National Weather Service (NWS) said.

“Be prepared for water over roads due to rapid rises on creeks and streams or even water flowing from farm fields,” the NWS in Des Moines, Iowa, said in an advisory.

Authorities closed roadways early Wednesday in several communities along the Des Moines and Mississippi rivers in the Midwest where intense rains have already fallen over the last few days, according to the NWS.

While southern and central U.S. areas suffered from an abundance of rain, rains in the western United States helped slow the growth of forest fires, the National Forest Service said.