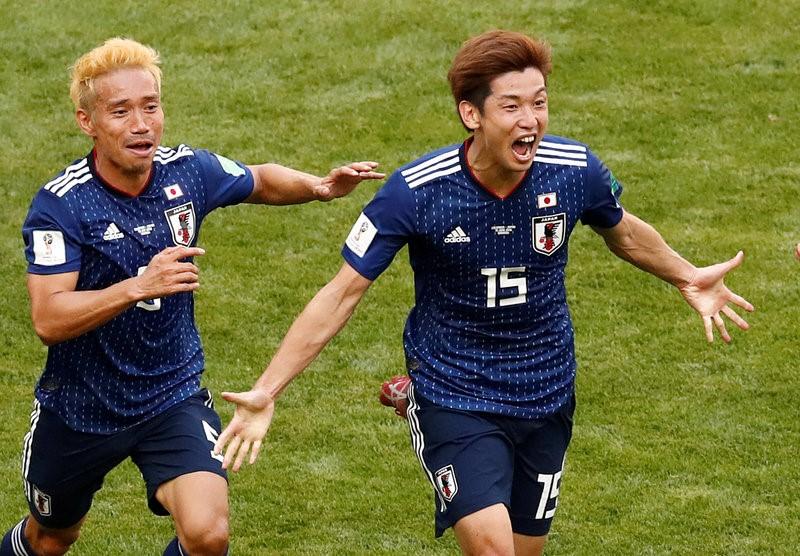 TOKYO (Reuters) – Japan on Wednesday basked in the glow of its World Cup soccer team’s historic win over Colombia, a victory that has lifted the nation’s mood after an earthquake struck its second-biggest metropolis Osaka.

Fans watching Tuesday night’s match at pubs and outdoor bars in the downtown Tokyo area of Shibuya celebrated when Japan clinched a 2-1 victory, exchanging high-fives with strangers on the street and flooding into Shibuya’s famous “scramble crossing,” prompting scores of police to come out to ensure order.

Newspapers splashed photos of jubilant Japan players in their blue jerseys on front pages on Wednesday, and government spokesman Yoshihide Suga highlighted that it was the first time an Asian team had beaten a South American side at the World Cup.

“This was a historic start,” Suga said. “Veterans and young players worked together as one to show the power of teamwork and a certain Japanese-ness.”

It was a win worth savoring over a team that had beaten Japan 4-1 at the 2014 tournament in Brazil — although Colombia played nearly the entire match with just 10 men after defender Carlos Sanchez was sent off for blocking a shot on goal with his arm less than three minutes into the game.

“When that happened, I thought this might lead to a miracle,” said 35-year-old Sayoko Fujisawa, who was watching the game at home and screamed when Yuya Osako headed in the second-half winner.

“I was hopeful, but that we won was beyond my expectations.”

University student Tatsuya Abe said that a loss to 10 men would have been tough to take for Japan, who had fired head coach Vahid Halilhodzic two months before the tournament and brought in Akira Nishino as his replacement.

“If we’d lost, everyone would’ve been in shock and unable to recover,” he said. “A lot of people were negative (about the team) before the game, with the last-minute change of the coach and other stuff. But with this win, Japan as a whole is going to turn positive.”

Abe, 19, added that Tuesday’s win would bring some cheer to Japan in the aftermath of the quake.

“This win will lift people’s spirits,” he said.

The second half of the match, shown live on public broadcaster NHK, received a viewer rating of 48.7 percent in the Kanto region that includes Tokyo. In Kansai, which includes Osaka, 44.1 percent of viewers tuned in, according to ratings agency Video Research.

Abe said he planned to travel 20 hours later this week from Niigata, in north-central Japan, to Ekaterinburg, Russia, for Japan’s next Group H match against Senegal on Sunday.

“If they beat Colombia, they can defeat their next opponent, too,” Abe said. “I think they can get as far as the last eight.”