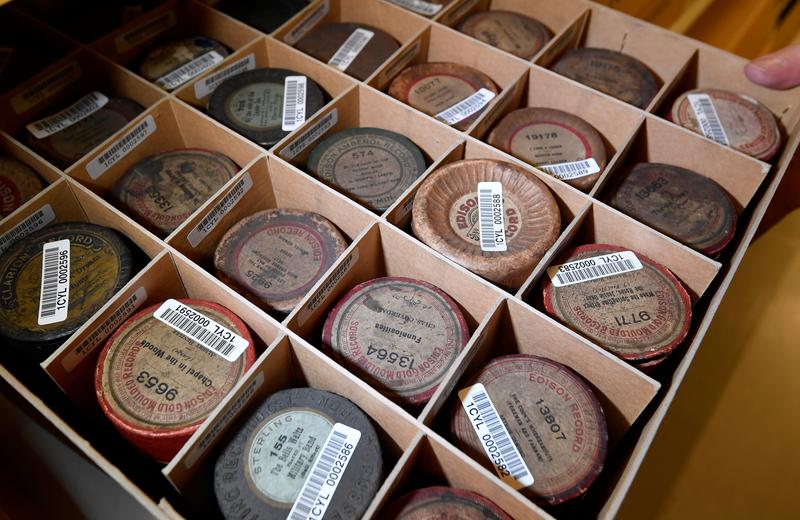 LONDON (Reuters) – In the basement of the British Library, curator Andy Linehan inspects the latest addition to a massive archive of wax cylinders, cassettes, LPs and CDs – a vinyl record that made musical history.

Andy Linehan, Curator of Popular Music Recordings at the British Library, displays a box of wax cylinder classical recordings from the 1870’s – a precursor to the vinyl record format – which forms part of the musical collection of over 250 000 pieces at the British Library in London, Britain, June 15, 2018. REUTERS/Toby Melville

Released in the United States in 1948, Mendelssohn’s Concerto in E minor, performed by violinist Nathan Milstein with the New York Philharmonic Symphony Orchestra, was the very first vinyl LP, or long playing record.

“The fact that the long playing record came into existence was a huge step for music sound recording and for the listener,” Linehan, curator of popular music in the British Library sound archive, said.

Andy Linehan, Curator of Popular Music Recordings at the British Library, displays an example of a wax cylinder classical recording from the 1870’s – a precursor to the vinyl record format – which forms part of the musical collection of over 250 000 pieces at the British Library in London, Britain, June 15, 2018. REUTERS/Toby Melville

Thursday marks 70 years since Columbia Records introduced the LP, and British music retailer HMV and label Sony Classical recreated 500 copies of the concerto to give away to fans, with one replica donated to the British Library’s archive.

The record adds to the library’s 250,000 collection of LPs, usually commercial releases in Britain, and artifacts going back to the beginning of sound recording, such as wax cylinders, patented by Thomas Edison in 1877, the first way fans could buy music to listen to at home.

Thursday’s anniversary comes at a time when vinyl has been enjoying a revival. In Britain, while it still only accounting for 7 percent of album sales, it draws fans of all ages.

“Vinyl is popular because people see it more artifact rather than utility,” Gennaro Castaldo, BPI communications director, said. “They love the whole ritual around buying it and then playing it at home and also the sound quality is much warmer, richer and people appreciate that.”

Rock remains the best selling vinyl genre and last year, the biggest seller on the format in Britain was Ed Sheeran’s “Divide” album. Older titles such as Amy Winehouse’s “Back To Black” and Fleetwood Mac’s “Rumours” were also in the top 10.

“Our record stores are stocking more vinyl than we’ve ever stocked in terms of the last 10 years,” Simon Winter, PR and events manager at HMV, said.

“I grew up with mum and dad listening to a lot of Meat Loaf and a lot of heavy metal and rock and roll … and a lot of that was done on vinyl,” Steve Pound said. “That recording is just very, very unique.”