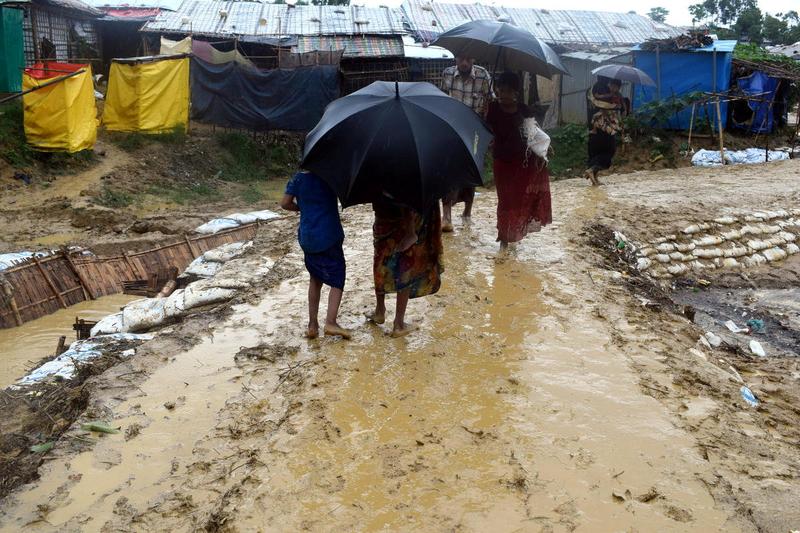 COX’S BAZAR, Bangladesh (Reuters) – International aid agencies and Bangladesh authorities are struggling to protect hundreds of thousands of Rohingya refugees against deadly monsoon landslides and floods ahead of the peak rainy season expected in July.

People walk after a storm at Balukhali refugee camp in Cox’s Bazar, Bangladesh June 10, 2018. Kristiana Marton/Save the Children/Handout via REUTERS

Just a few days of downpours and storms at the onset of monsoon earlier this month triggered landslides and floods, killing two and injuring several refugees, as well as damaging thousands of bamboo-and-plastic shelters built on the slopes of muddy brown hills.

The shelters house most of the hundreds of thousands of Rohingya Muslims who have fled to Bangladesh since last August to escape a military crackdown in neighboring Myanmar. The United Nations has called the campaign a textbook example of “ethnic cleansing” – a charge Myanmar denies.

The United Nations High Commissioner for Refugees (UNHCR) has said the number of Rohingya refugees now in Bangladesh has swelled to over 720,000.

They are living in sprawling and congested refugee camps around the town of Cox’s Bazar on the Bay of Bengal, which records Bangladesh’s highest rainfall and is prone to cyclones.

Aid and government officials have been working for several weeks to help build drainage systems, strengthen shelters, and create better access routes. But they say they are facing challenges in moving refugees to safer areas and with the monsoons having already begun, it’s become a race against time.

“The possibility of relocating all of the ‘at risk’ Rohingya population is very limited and challenging,” said Caroline Gluck, a representative for the UNHCR in Cox’s Bazar.

The Inter Sector Coordination Group (ISCG), which represents the work of aid agencies on the ground, says 45,000 refugees are living in “highest risk” areas but only about 15,000 of them had been relocated until June 10.

Some more refugees have since been moved to safer areas, aid and government officials said, but many are still living in bamboo-and-plastic structures perched precariously on hill slopes.

About 7,000 more are expected to be moved to safer areas by the end of June, the ISCG said in a June 13 weekly update report. But that would still not complete the relocation in time for the peak rains, which usually come to this part of the country in early July. (reut.rs/2K4dVRl)

Part of the problem has been finding suitable land and constructing shelters and facilities on it, officials say.

“It takes a lot of time and manpower trying to move such a large number of people…to flatten the hills and make them suitable for relocating,” said UNHCR’s Gluck.

Big yellow bulldozers were seen crawling around sections of the camps to create flat land, and many refugees were cutting down bamboo to strengthen or rebuild damaged structures.

A child wades through mud after a storm at the Chakmarkul refugee camp, in Cox’s Bazar, Bangladesh June 10, 2018. Kristiana Marton/Save the Children/Handout via REUTERS

Twenty-five-year old Minaroo said her 40-day-old son was sleeping in her tent when torrential rains one afternoon last week caused a landslide, crushing her shelter built on a hill slope at the Balukhali refugee camp.

“It’s a miracle my baby survived,” she said, holding her son in her arms as she stood under the hill where her shelter once was. She said she now sleeps in a temporary school in the camp, until aid officials move her to a shelter in a safer area.

“I don’t want to live there again, it is very dangerous,” said Minaroo, who uses only one name.

A two and a half-year-old Rohingya toddler and a male refugee were killed last week.

The Bangladesh government has provided about 500 acres of land for relocation, but only 100 acres of it has so gar been prepared for erecting shelters.

A much-criticized plan to move refugees to the remote island of Bhasan Char has been put off to September, after the monsoon, Bangladeshi officials said.

Officials say the relocation has also been slow because it’s been hard convincing some refugees to move again, barely ten months after escaping the military campaign in Myanmar.

“Many people don’t feel like they are under a lot of risk, or they want to stay close to their family and communities,” said Abul Kalam, Bangladesh’s refugee and rehabilitation commissioner. He said the government would not force them.

“These people have been forcefully displaced from their homes, and many of them are traumatized understandable if they don’t want to move so quickly again,” said George Gigauri, head of the International Organisation of Migration’s Bangladesh mission.

The IOM, along with the UNHCR, is one of the key agencies working at the camps with local aid groups.

“I think we are trying to do things as fast as possible,” Gigauri said.

Despite months of preparation and contingency plans, damage caused by the brief rain spell earlier this month has many worried about the impact of much harsher weather expected in the coming weeks. The ISCG has also said there is a lack of structures to which refugees can move to during high winds or cyclones, which are common in the region.

“It was quite a shock just how much things deteriorated in a short space of time,” said UNHCR’s Gluck, adding that coordination between the government and aid agencies had proved to be key.

With refugees continuing to arrive into Bangladesh from Myanmar, resources at the camps continue to be stretched, posing a challenge, she said.

At least 9,286 refugees have arrived in Bangladesh since January 2018, with almost 250 arriving in the two weeks to June 4, the UNHCR said in an operational update earlier this month.