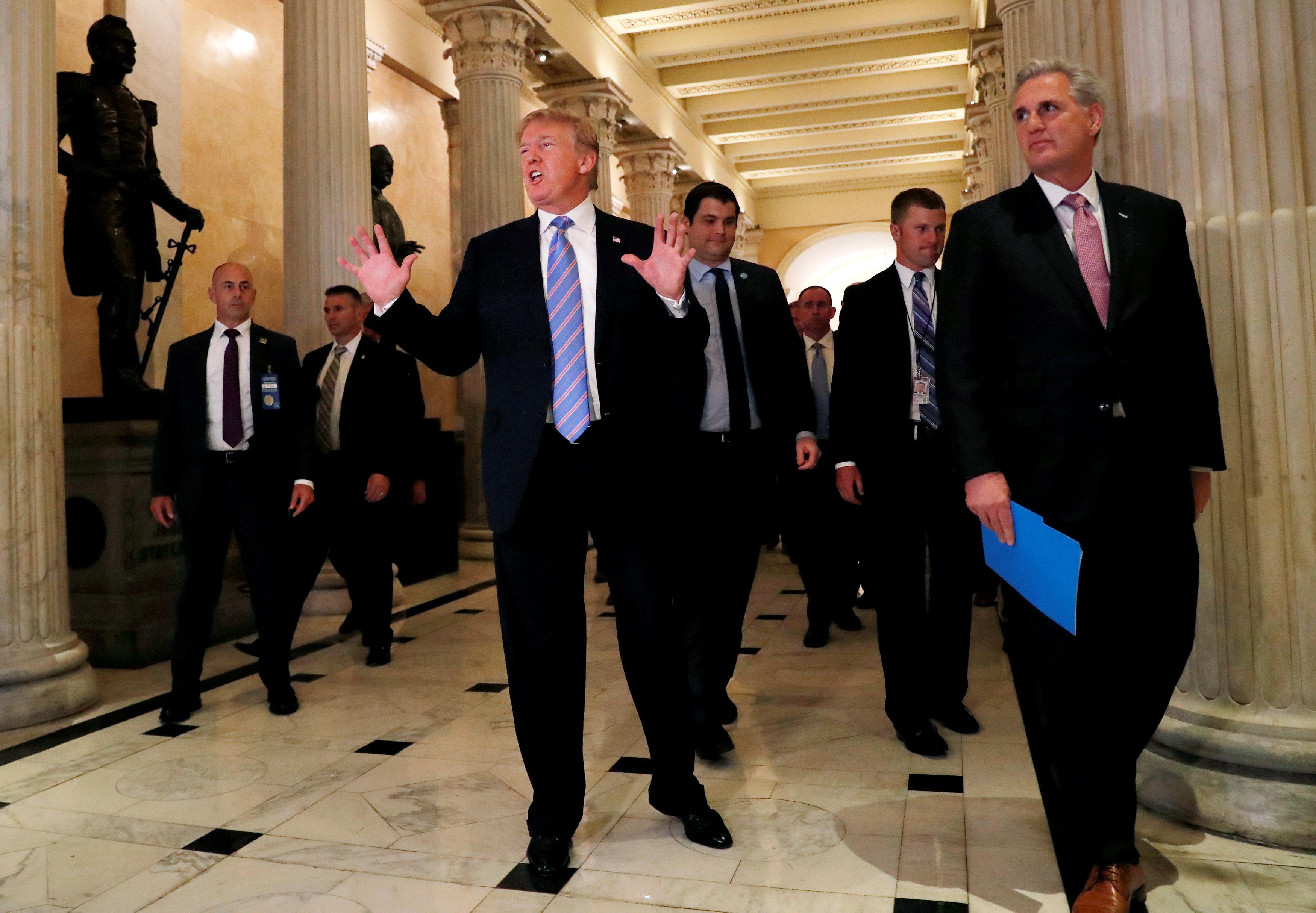 WASHINGTON (Reuters) – President Donald Trump told Republican lawmakers on Tuesday he would back either of the immigration bills making their way through the House of Representatives, as the outcry grew over his administration’s separation of immigrant parents and children at the U.S.-Mexico border.

Representative Mark Meadows said Trump told Republican members of the House at a meeting on Capitol Hill that they needed to get something done on immigration “right away.”

In the meeting, Trump said separating families was “certainly not an attractive thing and does look bad,” added Representative Tom Cole.

Congressional Republicans have been scrambling to craft legislation as videos of youngsters in cages and an audiotape of wailing children have sparked anger at home from groups ranging from clergy to influential business leaders, as well as condemnation abroad.

A Reuters/Ipsos national opinion poll released on Tuesday showed fewer than one in three American adults supporting the policy. The June 16-19 poll found that 28 percent of people polled supported the policy, while 57 percent opposed it and the remaining 15 percent said they did not know.

Trump, who has made a tough stance on immigration a centerpiece of his presidency, has staunchly defended his administration’s actions. He has cast blame for the family separations on Democrats, although his fellow Republicans control both chambers in Congress and his own administration implemented the current policy of strict adherence to immigration laws.

The president has sought to link an end to the family separations to passage of a wider bill on immigration, which would include funding for his long-sought border wall with Mexico, prompting Democrats to accuse him of using children as hostages.

An unidentified person yelled an obscenity at the president before he entered the meeting.

Earlier on Tuesday, the president tried again to blame Democrats for what he called “loopholes” in the law that require families detained for entering the country illegally either to be separated or released.

BILL WOULD PREVENT SOME SEPARATIONS

House Republicans were working on a revised draft of one version of an immigration overhaul that would prevent family separations in some cases for those attempting an illegal border crossing for the first time, according to a House Republican aide.

The draft bill was seen just days ago as unlikely to pass, but has gained support in the House, and it was unclear whether the new language about preventing family separations would improve its chances for passage.

Both Republican bills under discussion, which have been blasted by Democrats and immigration advocacy groups, would fund the border wall and reduce legal migration, in part by denying visas for some relatives of U.S. residents and citizens who are living abroad, sometimes referred to as “chain migration.”

The more conservative bill from Representative Bob Goodlatte would also deny “Dreamers,” immigrants brought illegally to the United States as children, the chance of future citizenship.

“My heart goes out to the impacted families,” said JPMorgan Chase & Co (JPM.N) Chief Executive Jamie Dimon, who chairs the Business Roundtable, in a memo to the bank’s employees. “Fixing these issues will clearly boost the economy,” he added.

U.S. Customs and Border Protection said on Tuesday that 2,342 children had been separated from their parents at the U.S.-Mexico border between May 5 and June 9.

The separations began after Attorney General Jeff Sessions announced in April that all immigrants apprehended while crossing the U.S.-Mexico border illegally should be criminally prosecuted.

A number of Republican senators called on Trump on Tuesday to allow families to stay together if they had crossed the border illegally, and Senate leaders said their chamber could have legislation to address the family separations matter in a matter of days.

Senate Majority Leader Mitch McConnell said: “We hope to reach out to the Democrats and see if we can get a result, which means making a law and not just get into some kind of sparring back and forth that leads to no conclusion,” he said.

Top Democrats contended that Trump could change the policy with the stroke of a pen.

“The president is trying set this trap in the public mind that somehow there is a law requiring him to do this and Congress can undo it,” said Senator Chris Van Hollen, who visited a detention center in Brownsville, Texas, over the weekend. “We know this is a problem that was manufactured six weeks ago, and we’re seeing the awful results today.”

Decrying “internment camps,” Democrats and their supporters disrupted a U.S. congressional hearing on Tuesday about an FBI probe.

With the sound of a young child crying in the background, the top Democrat on the House of Representatives Judiciary Committee, Jerrold Nadler, broke from traditional protocol and started reading from a statement, saying: “These (migrant) children are not animals.” His Republican colleagues tried to shout over him: “Out of order!”