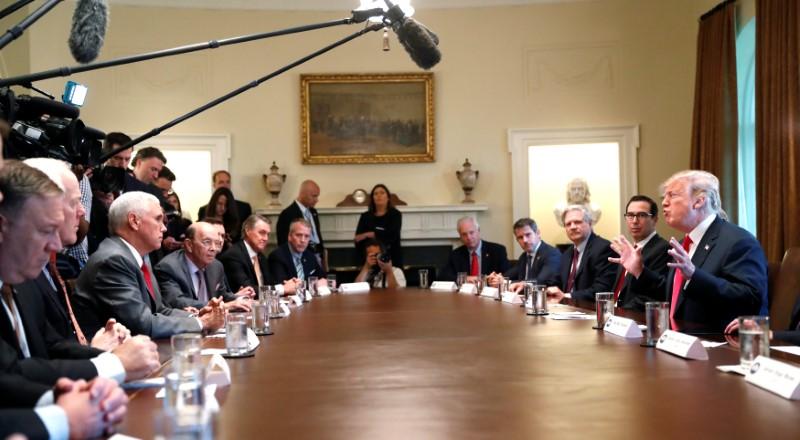 WASHINGTON (Reuters) – U.S. President Donald Trump said he would sign an executive order on immigration on Wednesday to end the separation of immigrant families at the U.S.-Mexico border, which has sparked outrage in the United States and abroad.

Trump, whose administration weeks ago began separating hundreds of children from their parents at the border, did not describe the specifics of the order.

“I’ll be doing something that’s somewhat pre-emptive but ultimately will be matched by legislation I’m sure,” Trump told reporters at the White House.

“We want security for our country,” Trump said. “We will have that as the same time we have compassion … I’ll be signing something in a little while that’s going to do that.”

The New York Times reported Trump was preparing an executive order that ends the separation of families by indefinitely detaining parents and children together, flouting a court settlement that prohibits such a move, according to a person familiar with his plans.

Videos of youngsters in cages and an audiotape of wailing children have sparked anger in the United States from groups ranging from clergy to influential business leaders, as well as condemnation from abroad, including Pope Francis.

Trump said he hoped his measure would be matched by legislation in the U.S. Congress.

The House of Representatives planned to vote on Thursday on two bills designed to halt the practice of separating families and to address other immigration issues.

But Republicans said they were uncertain if either measure would have enough support to be approved. Trump told House Republicans on Tuesday night he would support either of the immigration bills under consideration but did not give a preference.

Trump campaigned on stopping illegal immigration, including building a wall along the U.S.-Mexico border. He has fiercely defended his administration’s actions. He had earlier called on Democratic lawmakers to stop the family separations, even though his fellow Republicans control both chambers in Congress and his own administration implemented the current policy.

A Reuters/Ipsos national opinion poll released on Tuesday showed fewer than one in three American adults supporting the separation policy.

U.S. Customs and Border Protection said on Tuesday that 2,342 children had been separated from their parents at the border between May 5 and June 9.

The separations began after Attorney General Jeff Sessions announced in early April that all immigrants apprehended while crossing the U.S.-Mexico border illegally should be criminally prosecuted.

Parents who are referred by border agents for prosecution are held in federal jails, while their children remain in U.S. Customs and Border Protection custody or are moved into detention facilities managed by the Office of Refugee Resettlement, a Department of Health and Human Services agency.

Both Republican bills in the House, which Democrats and immigration advocacy groups have blasted, would fund Trump’s border wall and reduce legal migration, in part by denying visas for some relatives of U.S. residents and citizens who are living abroad, sometimes referred to as “chain migration.”

The more conservative bill from Republican Representative Bob Goodlatte also would deny the chance of future citizenship to “Dreamers,” who are immigrants brought illegally into the United States years ago as children.

House Speaker Paul Ryan told reporters that compromise legislation under discussion would provide funding to allow the Department of Homeland Security enough resources to house and care for families as they stayed together during the process.

“Under this bill, when people are being prosecuted for illegally crossing the border, families will remain together under DHS custody throughout the length of their legal proceedings,” he said.