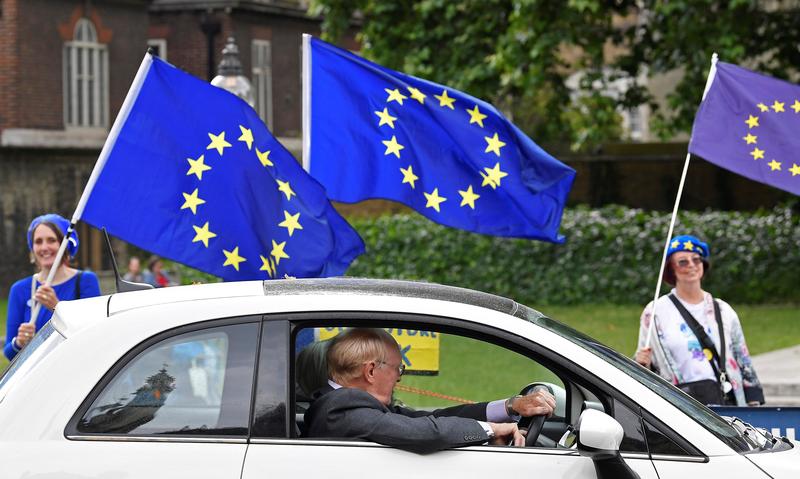 EDINBURGH (Reuters) – Scotland will struggle to attract the low-skilled workers it needs once Britain leaves the European Union, according to research by the universities of Edinburgh and Glasgow.

A motorist views anti-Brexit protestors outside of the Houses of Parliament in London, Britain, June 13, 2018. REUTERS/Toby Melville

A report, published on Thursday, described “a lack of joined-up thinking” in British policy on immigration, saying current proposals failed to balance the low-skilled needs of key Scottish industries such as food with, for example, the demographic needs of Scotland and its rural areas in particular.

The research looked in detail at how migrants in Scotland, Canada and New Zealand reach decisions about where to work.

“A shift to a more restrictive system is likely to have substantial effects on the supply of European Economic Area nationals into lower-skilled jobs,” the report said. “It is time to recognise the value of immigration into lower-skilled work.”

Britain is due to leave the EU in March next year, and its interior ministry will outline its plans on Thursday for new immigration rules for EU citizens who are living in United Kingdom.

The pro-independence Scottish government says Scotland needs its own immigration policy because its economic needs are different, something the British government rejects. Scotland, one of the UK’s four nations, voted against leaving the EU, and discontent is widespread.

Limiting the number of foreigners who enter Britain was a major reason Britons voted to leave the EU in 2016, and immigration is one of the thorniest issues in the Brexit negotiations.

Scotland’s population is ageing more quickly than the United Kingdom as a whole and its economy has been shored up by EU migrants in recent years. The report said workers from other countries may well opt for other European destinations or other English-speaking countries such as Canada or Australia.

The authors of the report “Choices Ahead: Approaches to lower skilled labour migration after Brexit” called on policy makers to look at factors affecting the motivation of immigrants and urged them to consider how easily foreigners can settle and integrate in Britain.

“Most of the discussion about immigration needs after Brexit has focused on higher skilled occupations – with the assumption being that we can regulate lower-skilled immigration through temporary and seasonal schemes,” Professor Christina Boswell, one of report’s authors, said.

“But experience from other countries suggests that such temporary schemes can have serious drawbacks, leading to vulnerability, a high level of churn, and challenges with enforcement. And such restricted rights programmes are likely to be far less appealing to EAA nationals,” she said.