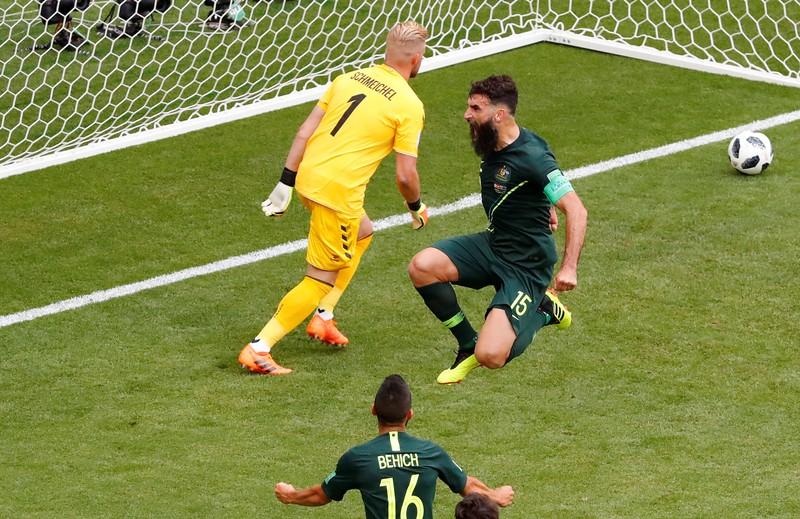 SAMARA, Russia (Reuters) – Captain Mile Jedinak rode to Australia’s World Cup rescue with a penalty to cancel out Christian Eriksen’s superb opener for Denmark, securing a 1-1 draw on Thursday that ensured Group C would go down to the wire.

Eriksen’s seventh-minute opener was fully deserved by the fast-starting Danes and the quality of his half-volley finish was excellent in a tournament that has produced some wonderful goals.

Jedinak, however, got Australia back into the game with his second penalty in Russia, awarded following the intervention of the VAR, and the draw kept the Socceroos just about alive in the tournament.

Denmark moved on to four points and need at least a draw against France in their final game to guarantee a last-16 spot. Australia’s destiny, however, is no longer in their own hands.

With one point, they must win their last match against Peru to stand any chance of going through, but results could still conspire to send them home.

“For me it is important just that we have to beat Peru,” Australia coach Bert van Marwijk told reporters. “I have no influence on the rest so I do not think about it. I will not sleep one second less.”

After their opening defeat by France, Van Marwijk resisted the temptation to draft in attacking reinforcements, leaving veteran forward Tim Cahill on the bench for the second match in a row.

It looked a bad decision in the early stages as Australia labored up front and the Danes tore into their opponents at a furious pace.

Aaron Mooy’s poor clearance was immediately returned into the area. Nicolai Jorgensen controlled and cleverly flicked the ball inside to Eriksen, who ghosted into space and lashed a sweet half-volley on the rise which flew high into the net.

It was Eriksen’s 13th goal in his last 15 appearances for his country and underlined the pivotal importance of the Tottenham Hotspur playmaker to the otherwise workmanlike Danes.

They should have doubled their advantage when Jorgensen flashed a header wide as Australia looked ragged at the back and toothless up front.

Yet just as in their opening game, Australia were handed a route back into the match from the penalty spot, thanks to the intervention of the Video Assistant Referee.

Referee Antonio Mateu Lahoz had failed to spot that Mathew Leckie’s header had struck the arm of Yussuf Poulsen, but after being alerted to the incident by the VAR, he pointed to the spot.

Danish keeper Kasper Schmeichel had not conceded for 571 minutes, but Jedinak calmly rolled home his penalty in the 38th minute to level the scores.

While Denmark coach Age Hareide did not dispute the decision to award the penalty, he was annoyed they had their own appeal waved away in the second half and flagged up issues with the consistency of the VAR system.

“There are people somewhere in Russia deciding to look at this because it looks like a penalty,” he said.

“But then you have other situations when they need to look at, but they are not doing that… To me, it was against us, but it was probably correct. It removes a bit of the charm from football.”

Having got back into the game, Australia seemed imbued with a renewed sense of belief, surging forward whenever they could and roared on by the vast array of green and gold clad fans in the Samara Arena.

They could not turn that impetus, however, into clear chances, although second-half substitute Daniel Arzani brought an additional spark to the Australia attack and had a good shot parried by Schmeichel at the death.