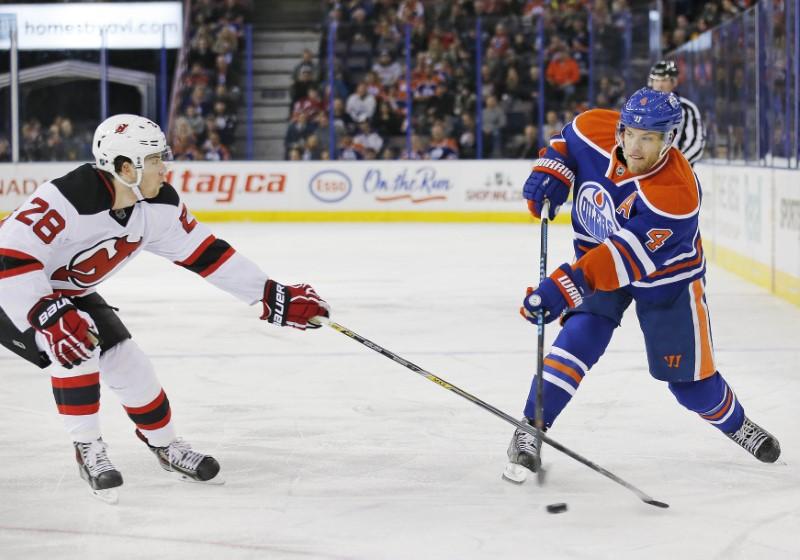 Taylor Hall claimed the Hart Trophy as the league’s most valuable player at the NHL awards ceremony Wednesday night in Las Vegas, becoming the first player in New Jersey Devils history to earn the honor.

Hall, who narrowly beat out Avalanche center Nathan MacKinnon (1,264 voting points to 1,194), tallied a career-best 93 points (39 goals, 54 assists) in 76 games this season, including a 26-game point streak. He managed those numbers despite sustaining torn ligaments in his left hand in December, an injury that required surgery to repair in late April.

Hall, 26, garnered 72 first-place votes to MacKinnon’s 60 from the Pro Hockey Writers Association, which votes on the award. He earned the honor in his second year with the Devils after spending his first six seasons with the Oilers, including the 2015-16 campaign as a teammate of last season’s MVP, Connor McDavid.

While McDavid finished fifth in the Hart voting this year, he did claim his second consecutive Ted Lindsay Award, edging MacKinnon and Hall. At age 21, McDavid is the youngest two-time winner of the award, which is given to the most outstanding player as voted on by his peers.

McDavid also won the Art Ross Trophy this year by leading the NHL in points (108 — 41 goals, 67 assists) for the second consecutive season.

The team’s first-round pick in 2015, Barzal appeared in two games during the 2016-17 campaign before his official rookie season this past year. The 21-year-old beat out finalists Brock Boeser of the Vancouver Canucks and Clayton Keller of the Arizona Coyotes.

Victor Hedman claimed the Norris Trophy as the league’s top defenseman, becoming the first winner of the honor in Tampa Bay Lightning history. The selection comes a year after Hedman was a Norris finalist and made his first career All-Star appearance.

The 27-year-old finished the season with 63 points (17 goals, 46 assists), fifth among NHL defensemen, and a career-best plus-32 rating. Hedman beat out finalists Drew Doughty of the Los Angeles Kings and PK Subban of the Nashville Predators for the honor.

The Predators’ Pekka Rinne earned his first Vezina Trophy as the league’s top goaltender after finishing as a finalist on three previous occasions. He produced a league-high eight shutouts this season while going 42-13-4 with a 2.31 goals-against average and a .927 save percentage.

The Winnipeg Jets’ Connor Hellebuyck and the Lightning’s Andrei Vasilevskiy were the other finalists.

The Kings’ Anze Kopitar, who finished third in the Hart voting, earned his second Selke Trophy in the last three seasons as the best defensive forward. Before receiving the honor in 2015-16, Kopitar had been a Selke finalist in each of the last two years. He finished this season with a plus-21 rating.

In one of the least surprising results, the Vegas Golden Knights’ Gerard Gallant took the Jack Adams Award as the NHL’s coach of the year. He led the Knights to 109 points, fifth best in the league, in their first-ever regular season before a run to the Stanley Cup Final, where they lost to the Washington Capitals.

Gallant, who was runner-up for the award in 2015-16 while with the Florida Panthers, claimed 102 of a possible 108 first-place votes, with the Avalanche’s Jared Bednar and the Boston Bruins’ Bruce Cassidy joining him as finalists.

Also garnering recognition for his job with the expansion Golden Knights was George McPhee, who was named the general manager of the year after assembling Vegas’ deep roster through the expansion draft and several trades.

Among other award winners:

—Late Humboldt Broncos junior hockey coach Darcy Haugan was honored with the inaugural Willie O’Ree Community Hero Award, presented to an individual who, through the game of hockey, has positively impacted his or her community, culture or society. Haugan was among 16 who died when the team’s bus was struck by a semi truck near Armley, Saskatchewan, on April 6 while traveling to a game. Ten of the 13 players who survived the crash were honored on stage Wednesday night.

—Golden Knights forward William “Wild Bill” Karlsson won the Lady Byng Trophy as the “player adjudged to have exhibited the best type of sportsmanship and gentlemanly conduct combined with a high standard of playing ability.” He beat out finalists Aleksander Barkov of the Panthers and Ryan O’Reilly of the Sabres.

—Canucks forwards Daniel and Henrik Sedin received the King Clancy Trophy for on- and off-ice leadership, along with humanitarian efforts. The identical twin brothers announced their retirement after 17 NHL seasons playing together in Vancouver earlier this year.

—Subban was announced as the cover athlete for EA SPORTS’ “NHL 19” video game. Wayne Gretzky will also appear on the cover of the special Legends and Ultimate editions of the game.