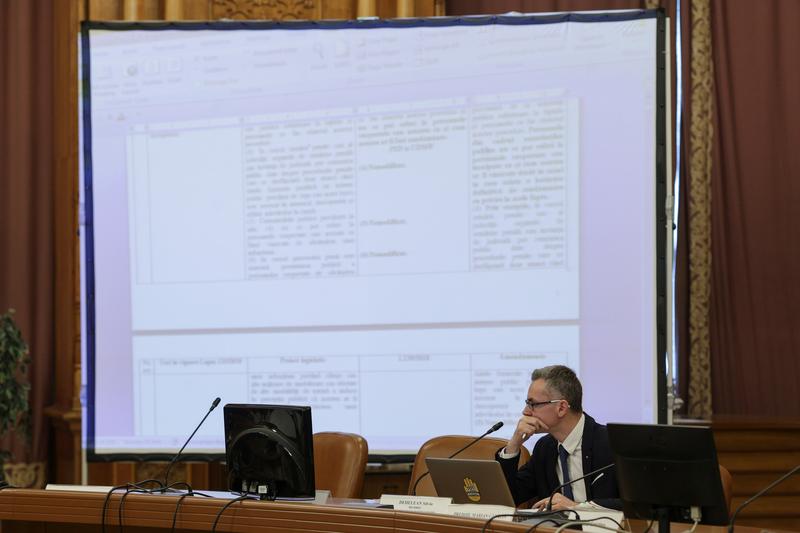 BUCHAREST (Reuters) – When Stelian Ion set aside law for politics he was hoping to fight for Romania’s environment. Instead the opposition lawmaker finds himself in a battle with the ruling party over fundamental changes to criminal law.

Member of the opposition Save Romania Union party, lawyer Stelian Ion, attends a meeting of the parliamentary committee aiming to modify the justice laws, in Bucharest, Romania, June 18, 2018. Inquam Photos/Octav Ganea via REUTERS

This week the tussle came to a head when parliament approved legal changes Ion said could encourage criminals to act with impunity, the latest twist in a regional drama that has exposed the fragility of eastern Europe’s post-communist democracies.

The ruling party’s overhaul of criminal procedures on Monday was part of a legislative campaign to stop what it describes as a conspiracy to bring it down via unfounded corruption charges.

Its intervention in the justice system has prompted the biggest protests since communism fell in 1989 and thrown down a challenge to the European Union, which Romania joined in 2007.

Brussels is already embroiled in a standoff with Poland over court reforms that the EU says threaten the rule of law and Romania’s moves risk broadening a rift between east and west.

The U.S. State Department and the European Commission have criticized the planned legal changes: the Commission keeps Romania’s justice system under special monitoring and has praised magistrates for tackling high-level graft.

Magistrates and other experts told Reuters the bill rushed through parliament would raise the burden of proof for all criminal investigations, not just those alleging corruption. Cases would collapse and many crimes could go unpunished, they said.

“If the bill passes into law as is …. crime will rise in the next year or two, not just corruption-related but on the street as well,” said Ion, one of a few opposition lawmakers on a parliamentary commission which altered hundreds of amendments to the bill hours before it went to a final vote.

Dozens of members of the ruling Social Democrat party (PSD), including leader Liviu Dragnea, are under investigation or on trial on corruption charges. They have denied the charges, and have used their majority to try to shake them off, saying they stem from a plot by their opponents to discredit them.

Ion’s Save Romania Union and colleagues in the opposition Liberal Party have just days to put objections to the constitutional court, part of a legal fight with the ruling party that began soon after it came to power in January 2017 and has now reached a critical stage.

“I was not expecting such a fierce and open battle over the rule of law,” he said in a telephone interview. “But … I will continue fighting for as long as I can.”

Ion and fellow opposition lawmakers have challenged bill after bill at the Constitutional Court while centrist president Klaus Iohannis and thousands of magistrates have also voiced concerns.

But the Social Democrats are pressing on.

In one of the EU’s most graft-prone states, the ruling coalition is in the process of dismissing the chief anti-corruption prosecutor and giving politicians more control over the judiciary as well as loosening up criminal legislation.

Earlier this month, the government bused hundreds of thousands of supporters to Bucharest for a rally against what it said were judicial abuses. It told the crowd there was a parallel state that illegally wire taps them and encourages neighbors to turn on each other.

“You mustn’t be under the illusion that only high-ranking officials or public servants are targets,” Dragnea told them. “Nobody is safe. Absolutely everyone can be targeted by a tip-off which could lead to a conviction.”

Ion and his opposition colleagues are part of this parallel state, the PSD has said, as are activists, prosecutors, judges, secret services, journalists and foreign companies.

It is an argument with echoes of neighboring Turkey, where President Tayyip Erdogan has cited a nefarious ‘Deep State’ to justify pursuing political opponents across Turkish society.

It chimes too with Viktor Orban’s criticism of foreign-funded civil society groups in Hungary and with Poland, where the government often refers to ‘Poles of the worst kind’.

But while Orban and Jaroslaw Kaczynski are seen as nationalist ideologues, critics say Dragnea has more pragmatic motives in undoing anti-graft efforts.

Dragnea has been found guilty in a vote-rigging case, barring him from the post of prime minister.

A preliminary verdict in the trial in which he stands accused of inciting other officials to commit abuse of office is due on Thursday. He is also under investigation for allegedly pocketing EU funds. He denies any wrongdoing in all three cases.

“There is no parallel state,” President Klaus Iohannis said. “It is a PSD invention used to explain their anti-judiciary and anti-secret service actions. It is that simple.”

The criminal procedure changes include limiting criminal investigations to a year before indictment and restricting the types of evidence and warrants that can be used in prosecutions. They also ban appeal courts from overturning acquittals by lower courts without new evidence.

Anti-corruption prosecutors have seized assets worth $2.3 billion in the past five years and secured 4,751 convictions, including 27 lawmakers and 83 mayors across parties, as well as ministers, county council heads, state firm managers and magistrates.

Romania was the country where the European Anti-Fraud Office OLAF ran most investigations of EU funds misuse last year.

The Social Democrats have said they aim to approve changes to the criminal code by mid-July and critics expect attempts to shorten sentences and target graft offences.

The European Commission has limited options. It can maintain the justice monitoring mechanism and trigger infringement procedures, and it can cut development funds, which Romania is already struggling to tap. It can also continue keeping Bucharest outside the borderless Schengen area.

Asked to comment, a Commission spokesman said it was following the judicial and criminal codes reforms closely. “We take note of the adoption of the criminal procedure code. We will look into it and analyze it,” he said.

Legal challenges to the new judicial overhaul have nearly run their course and the president will soon be obliged to sign it into law. It limits the president’s powers in appointing chief prosecutors and sets up a special unit to prosecute potential crimes committed by magistrates.

Judge Cristi Danilet was part of the team reforming the judiciary in the run-up to EU accession and a member of the judicial watchdog. He said attempts to weaken graft laws were not new but they were more concentrated now.

“There are a lot of them, radical and in an extremely short timespan, that is why we are all so scared. It’s a blitzkrieg.”

Dragnea has said changes to the criminal codes are meant to reflect EU directives and previous court rulings and has denied they are intended to safeguard politicians. “There is not one amendment made for a specific person,” he told Reuters.

Ion is not giving up. “Nothing is forever, the PSD will lose power eventually and judicial legislation will be repaired.”

With the next election due in 2020, IT entrepreneur Catalin Tenita is working to finance opinion surveys, monitor public spending and encourage people to vote by connecting programmers with civil society groups via his Geeks for Democracy platform.

“It is the duty of every generation to make an effort to survive,” he said. “No battle is lost.”