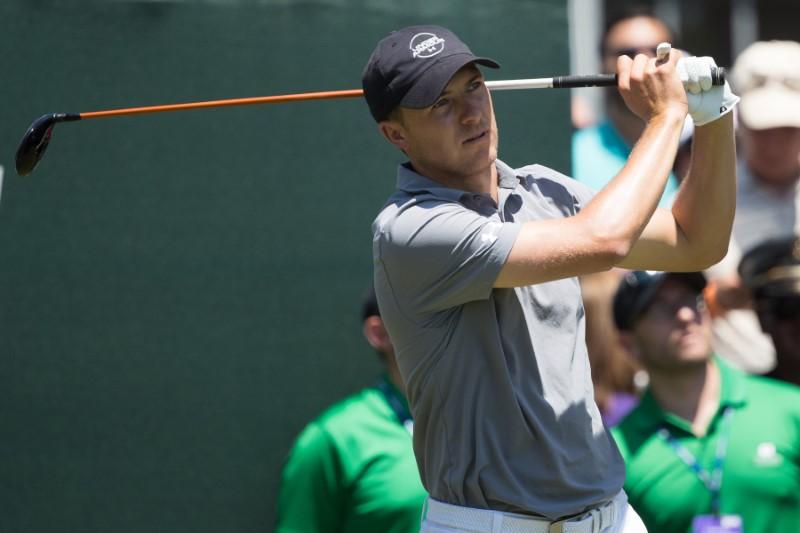 (Reuters) – Defending champion Jordan Spieth downplayed the significance of his score after carding seven-under-par 63 to tie fellow American Zach Johnson for the first-round lead at the Travelers Championship on Thursday.

Spieth and Johnson, between them winners of two of the past three British Opens, headed Britain’s Rory McIlroy by one stroke as the cream quickly rose to the top on the TPC River Highlands course in Cromwell, Connecticut.

U.S. Open champion Brooks Koepka got to five-under after 11 holes but finished poorly with four late bogeys in a 68.

“I just lost a bit of energy there at the end. Still don’t really know where I’m at,” a weary Koepka told reporters.

He said he had only slept for about three hours on Sunday night after finally getting back home to Florida just before dawn.

Spieth, buoyed by a 30-foot eagle from a bunker at the par-five sixth, was nearly flawless apart from a bogey at the par-four 15th, where he hooked his tee shot into a pond that was so far left it surprised the group waiting on the nearby 16th tee.

The Texan, who made bogey at the 36th hole to miss the cut by one stroke at Shinnecock Hills last week, fared much better on the friendlier confines of TPC Connecticut.

But he was not carried away by one good day.

“I wouldn’t say it was big or necessary or anything,” Spieth told Golf Channel, four weeks ahead of defending his Open title at Carnoustie.

“Very positive about making progress from how I got pretty off earlier this year so it’s good to see a good score but still a long way to go.

“First rounds have been detrimental to me so it’s nice to be in the thick of things.”

Spieth has putted poorly for much of the year, but he sounded upbeat about his progress.

“Putter feels great,” he said. “I’m seeing my lines better and it’s a matter of time I think before it gets to the level I’ve been at before.”

McIlroy, like Spieth, also bowed out after 36 holes at the U.S. Open, and put his unexpected free weekend to good use.

“I’ve had a little time to practice over the last few days, working on some stuff that stood out the first two days at Shinnecock,” he said.

The only one he missed was at the par-four 18th, where he slipped while hitting his approach shot that resulted in a poor chip and missed putt for par.

Reporting by Andrew Both; Editing by Greg Stutchbury