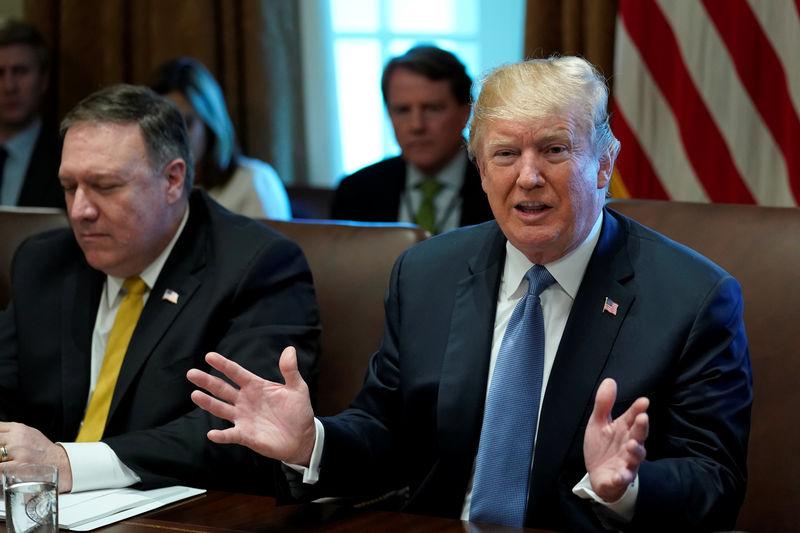 WASHINGTON/MCALLEN, Texas (Reuters) – President Donald Trump said on Thursday he was directing federal agencies to begin reuniting children and parents separated at the U.S.-Mexico border after entering the country illegally, a first step to implementing his executive order reversing an administration policy that had drawn global condemnation.

Trump’s announcement came as his wife, Melania, made a damage-control visit to a border detention facility in Texas where children are being held. Video footage of children sitting in cages and an audiotape of wailing children had sparked anger as the images were broadcast worldwide.

“We want to put them together. We don’t want to have children separated from their parents,” Trump said at a meeting with his Cabinet.

Trump told the Cabinet he had directed the departments of Justice, Homeland Security and Health and Human Services “to work together to keep illegal immigrant families together during the immigration process and to reunite these previously separated groups.”

Last week Trump had said only Congress could change the separation policy but on Wednesday he signed an executive order to keep families together during immigration proceedings. The order still faces possible legal challenges and administration lawyers were expected to file a request as early as Thursday to modify a 1997 court settlement that limits the government’s detention of minors to 20 days.

Melania Trump made an unannounced trip to the border city of McAllen to meet with staff members at a detention facility for minors and asked about their work and the treatment of children.

“I’m here to learn about your facility, in which I know you house children on a long-term basis, and also like to ask you how I can help these children to reunite with their families as quickly as possible,” she said.

The executive order was an unusual reversal for Trump, who made cracking down on illegal immigration a key part of his presidential campaign. It moves parents with children to the front of the line for immigration proceedings but it does not end a 10-week-old “zero tolerance” policy that calls for prosecution of immigrants crossing the border illegally under the country’s criminal entry statute.

There were some early signs that prosecutors at the border with Mexico were showing more leniency.

In a federal courthouse in McAllen, not far from the detention facility the first lady visited, 17 cases against parents who had crossed illegally and whose children had been taken away were dismissed on Thursday, according to Carlos Garcia, an immigration attorney on the board of directors of the Texas Civil Rights Project.

There was no formal court proceeding and the magistrate judge was not there, said Garcia, who was in attendance. Instead, federal public defenders told the 17 adults they would not be prosecuted.

There was no immediate prospect, however, of them reuniting with their children. The children and parents were separated two or three days ago and are now in custody, with parents unaware of their exact whereabouts. Attorneys have not been notified of any reunification efforts, Garcia said.

The administration also has sought a permanent legislative fix on the issue, but congressional Republicans said the U.S. House of Representatives was likely to reject two immigration bills designed to halt the practice of splitting up families and address a range of other immigration issues.

Republican U.S. Representatives Ralph Norman and Mark Meadows, prominent members of the conservative Freedom Caucus, told reporters they did not think either of the bills had enough support to pass the Republican-controlled House.

Both House bills, backed by Trump but opposed by Democrats and immigration advocacy groups, would fund the wall Trump has proposed along the U.S. border with Mexico and reduce legal migration, in part by denying visas for some relatives of U.S. residents and citizens living abroad.

The more conservative bill would deny the chance of future citizenship to “Dreamers” – immigrants brought illegally into the United States years ago when they were children.

Even if a bill clears the House, it would face an uncertain future in the Senate, where lawmakers are considering different measures and where Republicans would need at least nine senators from the Democratic caucus to join them to ensure any bill could overcome procedural hurdles.

“What is the purpose of the House doing good immigration bills when you need 9 votes by Democrats in the Senate, and the Dems are only looking to Obstruct,” Trump said in a tweet as he renewed his call for a change in Senate rules to allow legislation to move with a simple majority.