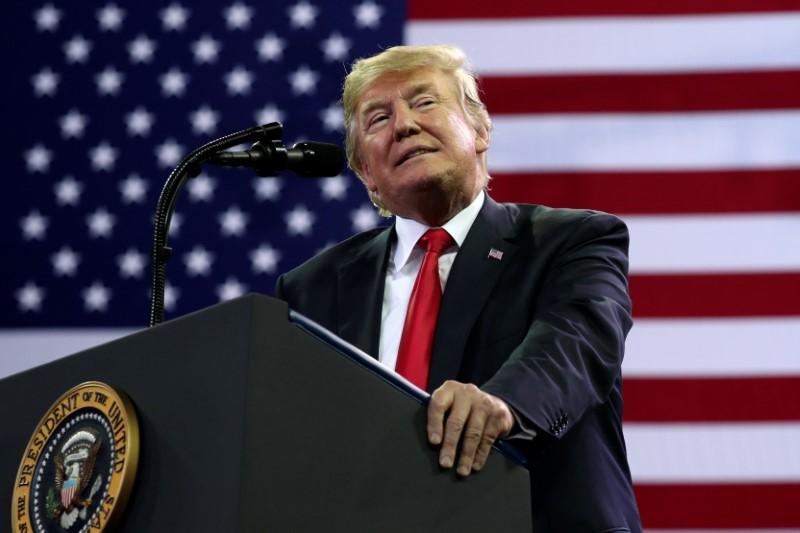 WASHINGTON (Reuters) – U.S. President Donald Trump said on Thursday North Korea was blowing up four of its big test sites and that a process of “total denuclearization … has already started,” but officials said there was no such evidence since a landmark summit last week.

“And the big thing is it will be a total denuclearization, which has already started taking place.”

It was not immediately clear which North Korean test sites Trump was referring to and U.S. officials familiar with current intelligence on North Korea’s nuclear and missile test sites said there was no evidence of new moves to dismantle any sites since Trump met North Korean leader Kim Jong Un on June 12.

The officials, speaking on condition of anonymity, speculated Trump might have been referring to explosions last month that North Korea said were to destroy tunnels at the Punggye-ri nuclear test site and the dismantling of a medium-range ballistic missile test stand at Iha-ri, also in May.

There had been contact with North Korean officials since the summit, the U.S. State Department said.

U.S. Secretary of State Mike Pompeo “will be meeting with them and talking with them at the earliest possible date” to implement what was agreed in Singapore, spokeswoman Heather Nauert told reporters, without providing further details.

Asked on Wednesday if North Korea had done anything toward denuclearization since the summit, U.S. Defense Secretary Jim Mattis told reporters: “No, I’m not aware of that … obviously, it’s the very front end of a process. The detailed negotiations have not begun. I wouldn’t expect that at this point.”

Mattis sat next to Trump at Thursday’s Cabinet meeting.

The Pentagon did not immediately respond to a request for comment on Trump’s latest remarks. There also was no immediate response from the White House.

The U.S.-based North Korea monitoring group 38 North said in an analysis at the end of last week there had been no sign of any activity toward dismantling of any missile test site.

Trump, who has been leading an international drive to press North Korea to abandon development of nuclear missiles capable of reaching the United States, told reporters after the June 12 summit that Kim had pledged to dismantle one of his missile installations.

A U.S. official said on Wednesday that the site Trump referred to then was the Sohae Satellite Launching Ground, a major facility in the western part of the country that has been used for testing engines for long-range missiles.

North Korea announced before the Singapore summit the suspension of its ICBM testing and also closed its nuclear bomb test site, where it conducted several explosions in front of visiting media that it said were to destroy testing tunnels. U.S. officials, however, have cautioned that such actions are reversible.

In the Cabinet meeting, Trump acknowledged that “things can change.”

“Personalities can change. Maybe you end up with conflict. Maybe you don’t,” he said. He said both he and Pompeo had established a “very strong” relationship with Kim that he thought would lead to “tremendous success.”

Trump went on to say that the “number-one statement” in the document he and Kim signed in Singapore was “we will immediately begin total denuclearization of North Korea,” although there was no such statement in the text.

In the joint statement, Kim “reaffirmed his firm and unwavering commitment to complete denuclearization of the Korean Peninsula,” but made no reference to a timeline. Going into the summit, Pyongyang repeatedly rejected unilateral nuclear disarmament.

Pompeo told the same Cabinet meeting Kim had made a personal commitment, and added: “He has got his reputation on the line.”

Pompeo said U.S. allies and North Korea’s neighbor and ally China were supportive of the U.S. policy of maintaining sanctions on Pyongyang until its denuclearization was complete.

Trump repeated his thanks to Chinese President Xi Jinping for supporting sanctions, although he said that the border between China and North Korea was “getting a little weaker now.”

Trump also said the remains of U.S. troops missing from the Korean War were in the process of being returned to the United States from North Korea, correcting a statement he made a day earlier.

Trump said on Wednesday the remains of 200 American servicemen had already been sent back, following on from the agreement he reached with Kim in Singapore.

Two U.S. officials, speaking on condition of anonymity, said that while North Korea was expected to return the remains of soldiers in coming days, they had not yet been returned.