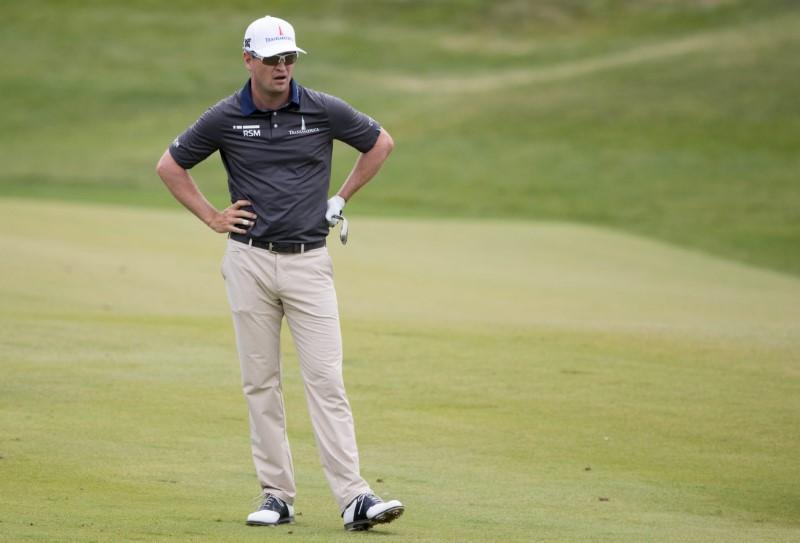 (Reuters) – Two-times major champion Zach Johnson fell foul of the “10-second rule” on Friday but managed to stay close to the lead as the American ended the second round one stroke behind pacesetter Brian Harman at the Travelers Championship in Connecticut.

Jun 22, 2018; Cromwell, CT, USA; Zach Johnson reacts to his approach on the 18th fairway during the second round of the Travelers Championship at TPC River Highlands. Mandatory Credit: Bill Streicher-USA TODAY Sports

Johnson’s attempted birdie putt at the par-four third hole stopped right on the edge of the cup, but frustratingly defied gravity and did not drop — at least not for a while.

A player in such a situation is “allowed enough time to reach the hole without unreasonable delay and an additional 10 seconds to determine whether the ball is at rest”.

After walking to the ball and then waiting his allotted time, Johnson prepared to tap in for par when it toppled in of its own volition.

He summoned a rules official and was informed he had recorded a par four, even though he had only struck the ball three times.

The relevant rule, 16-2, requires a penalty stroke in such situations if the 10-second wait has expired before the ball topples in.

“I probably should have really walked slow up there and taken my time. It’s a rule protection for pace of play,” Johnson told Golf Channel after carding a two-under-par 68.

“They said it took about 15 seconds to fall in, so I was about five seconds over.”

Johnson ended the day in a tie for second with fellow American Russell Henley and Australian Matt Jones on nine-under, as American Harman surged ahead of the field with a 66 at TPC River Highlands in Cromwell.

Johnson, without a win since the 2015 British Open at St Andrews, was happy with his position as he seeks to end his nearly three-year drought.

Jun 22, 2018; Cromwell, CT, USA; Zach Johnson lines up his putt on the 18th green during the second round of the Travelers Championship at TPC River Highlands. Mandatory Credit: Bill Streicher-USA TODAY Sports

“Got an opportunity for the weekend,” he said. “I love what we’re doing and how we’re doing it, a lot of fairways, a lot of greens.”

Leader Harman had three bogeys on his outward nine, but was more assured coming home to post a 130 halfway total.

“I’ve played pretty aggressively. I’m just going to keep on doing what I’ve been doing and see what happens.”

Rory McIlroy, a stroke from the overnight lead, carded a 69 to slip three strokes back.

“I need to do a little bit of work on the range this afternoon and get more comfortable for the weekend,” the Northern Irishman said.

Defending champion Jordan Spieth, who shared the first-round lead with Johnson, backtracked with a 73 to plunge six strokes off the pace.

A triple-bogey at the par-five 13th included two penalty strokes, the first after a wayward drive and the second after finding a pond guarding the green.

Reporting by Andrew Both in Cary, North Carolina; Editing by John O’Brien