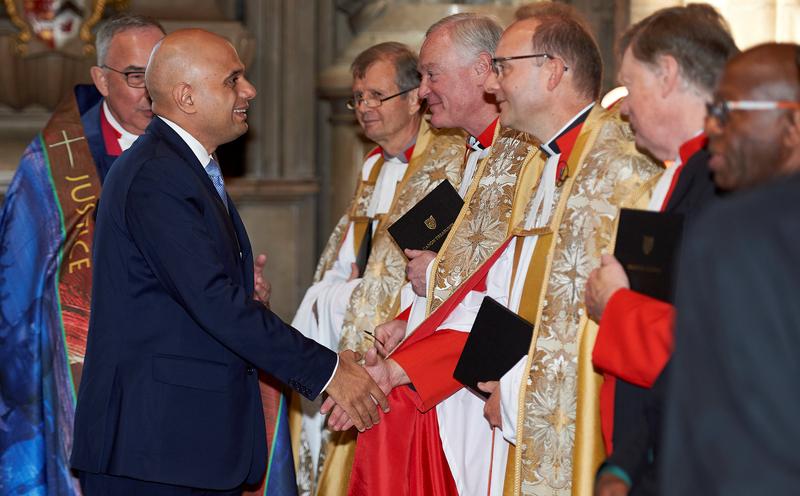 LONDON (Reuters) – Britain marked 70 years since the first post-war migrants from the Caribbean arrived on the Empire Windrush with a thanksgiving service on Friday which took on extra meaning after many were revealed to have been wrongly identified as illegal immigrants.

Britain’s Home Secretary Sajid Javid arrives at a Service of Thanksgiving to mark the 70th anniversary of the landing of the Windrush, at Westminster Abbey, London, Britain, June 22, 2018. Niklas Halle’n/Pool via REUTERS

Two months ago, Britain apologised for its “appalling” treatment of thousands of people of the Windrush generation who were denied basic rights after a tightening of immigration policy, despite having lived in Britain for decades.

“The fact that Britain had always been their home makes the treatment that some members of the Windrush generation experienced in recent years so very wrong,” said Prime Minister Theresa May in a statement marking the anniversary.

“It should never have happened and we are putting it right,” she added. “This year a chance to celebrate the arrival of the Windrush and everything it represents for our country.”

Performers from the HEbE Foundation charity perform during a Service of Thanksgiving to mark the 70th anniversary of the landing of the Windrush, at Westminster Abbey, London, Britain, June 22, 2018. Niklas Halle’n/Pool via REUTERS

The situation raised questions about the role of May who as Rudd’s predecessor introduced tougher controls to crack down on illegal entry into the UK. May attended Friday’s service at Westminster Abbey, along with Javid.

Indefinite leave to remain was given to Commonwealth citizens already living in the UK under the 1971 Immigration Act.

But many had arrived in the UK on their parents’ passports and had not formally applied for British citizenship or a passport.

Evidence of their records was not kept by the Home Office after it became apparent landing cards, given to Windrush generation members, were destroyed in 2010 when May first stepped into the role of interior minister.

Threat of deportation and lack of evidence to prove British citizenship has meant job losses, homelessness and denial of access to healthcare services for many who have lived, worked and paid taxes in the UK over the last 70 years.

Public awareness of such cases led to a petition demanding amnesty for anyone who arrived in Britain as a minor between 1948 and 1971, gathering almost 180,000 signatures.

A government review into how the situation escalated is ongoing. In the meantime, it is working on resolving individual cases by issuing permanent residence rights and unemployment benefit.